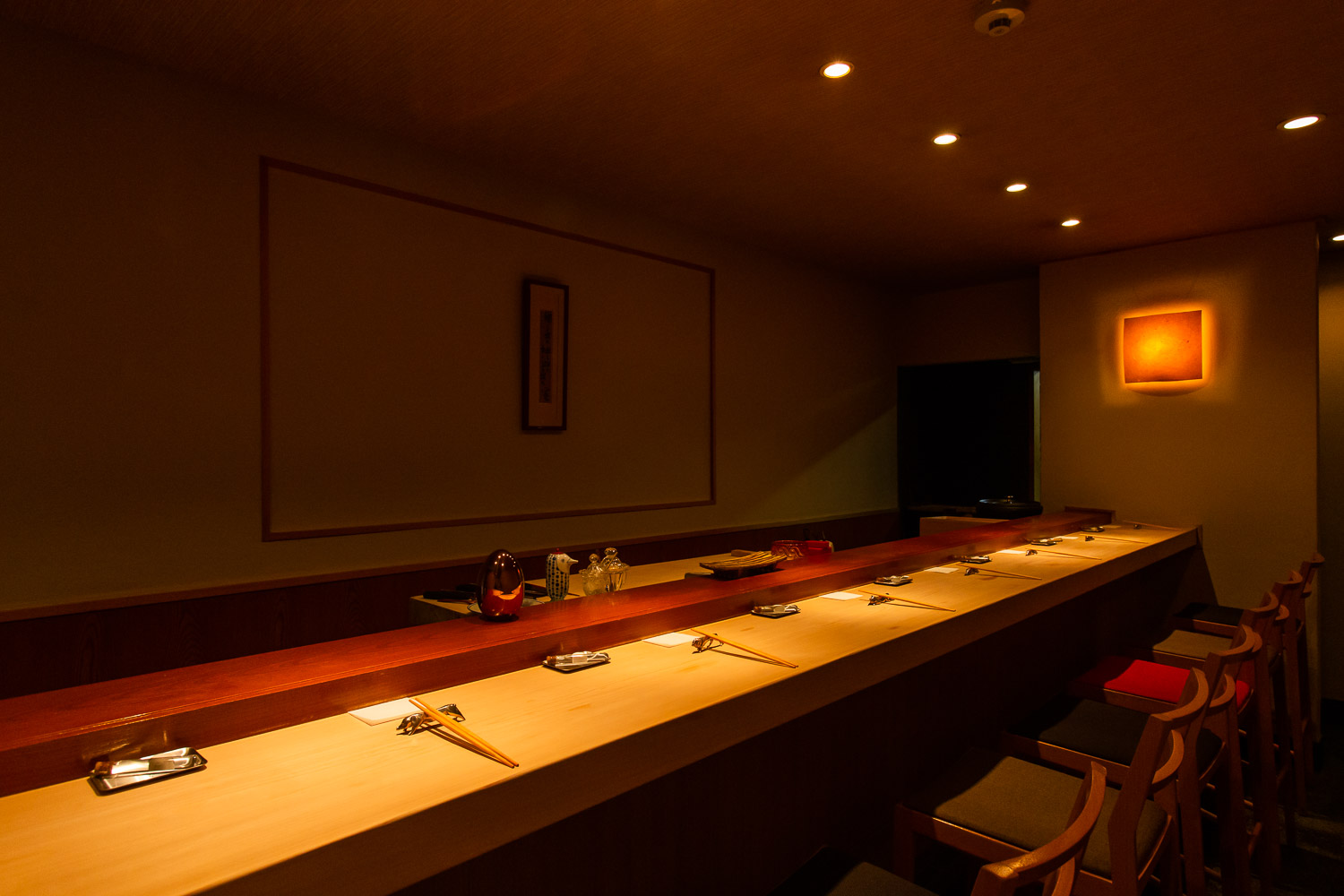 Sushi reimagined under a modern gastronomic lens. From the unusual combination of ingredients to scientific techniques, SushiYoshi’s menu reminds you of experimental cuisine of top contemporary restaurants like El Bulli. From the slice of rich abalone cake to homemade caviar, every dish is far removed from anyone’s expectations, and exquisitely presented. Sourcing inspiration in cultures from around the world, this two-starred Osaka restaurant orchestrates a meal to remember.

Wrapped in a western chef’s coat with a navy apron, Chef Hiroki Nakanoue greets guests with a warm smile. From his untraditional look of blonde hair and oversized round glasses, you already know you are in for an eccentric surprise. Fully self-taught, he has learned to break the mold and create an innovative world of sushi that has been acclaimed with two Michelin stars and by a fast-growing group of international fans.

Located in the busy Minamimorimachi district in central Osaka, the little restaurant hosts just eight guests at lunch and also at dinner. The beautiful hinoki wooden counter that stretches as far as 6m long is set with polished Christofle cutlery and Baccarat crystal glasses. Discovered by the global community of gourmands, it is always full of guests from all corners of the world.

The inspiration behind Sushiyoshi’s cuisine come from Nakanoue’s worldly mindset and relationships. Thanks to an introduction made by one of his French guests, he has been making an annual visit to France from about four years ago, joining local chefs in their kitchens to experiment on new recipes and refine his culinary instinct.

The omakase menu flows like a French kaiseki meal, made up of sixteen to eighteen beautiful small courses. Whether it’s the presentation or the combination of flavors, every dish is full of surprises that appeal to your five senses. Despite its western appearance, Sushiyoshi’s cuisine is built on the essential principle of sushi—to bring out the best flavor of the fish.

First, be prepared that Nakanoue has this incredible ability to transform an ingredient into something so different to what we are accustomed to. Take abalone for example. The popular sushi appetizer is not bathed in dashi broth but baked with almond paste, milk and eggs. Served like a slice of gâteau au chocolat, the dark green cake is infused in abalone’s sweet umami in a subtle, beautiful way. “I’m not a big fan of abalone so I have to think hard about new recipes every season,” he confesses.

Similarly, the signature botan shrimp dish has no trace of the shrimp’s original shape. The juicy meat is sliced thinly and layered onto a plate in a clean rectangle. The pinkish orange slices, which are easily mistaken for smoked salmon, are first frozen to create an interesting texture and served with shaves of Italian summer truffles. After you finish eating, you will see that the bottom of the plate is printed with the word for shrimp in all these different languages.

Nakanoue’s cuisine strikes a fine balance between art and science. Riding on a similar approach to experimental European chefs, many of the recipes require multiple processes that have been devised with great precision. The watarigani blue crab is steamed for 23 minutes and then matured in the refrigerator for three days. Served in a little brass pot with a handle, the soft crab meat is packed with a generous heap of homemade caviar and drizzled with white sesame oil.

Be blown away by the surprise hidden in the kinki rockfish sushi. The piece looks like a straightforward sushi but as you pop it inside your mouth, you will quickly realize the shari is not made of vinegared rice but from small pieces of mushrooms and cauliflower tops. The difference in texture and the combination of flavors are a wonderful surprise.

Presented like a piece of modern art, the slice of snapper roe is served with a little circular leave and a tiny purple flower on top. The roe is marinated in wine vinegar, cooked in low temperature and rested for over a week for its flavor to settle. The arm of ink squid is just slightly grilled, drizzled with lemon juice and paired with a slice of matured karasumi, salted mullet roe.

INGREDIENTS
Nakanoue sources most of his fish as well as vegetables and fruits from the central Osaka market. He picks and chooses the highest-quality produce from other markets as well. Sea urchin is one of the most popular foods of his guests so he spends his time looking for the best in markets in Toyosu, Fukuoka and Nagasaki.

The delicious caviar used in the crab dish comes from a batch he made himself at a factory in Bordeaux. It’s made with less salt than how it’s normally made, to match the soft Japanese flavors. For the shari rice, he selects aged Saga Biyori grains and flavors them with rice vinegar and two types of red vinegar.

“For sake, I pick vintages that don’t over stress themselves,” he says. Among his favorites are Mimurosugi from Nara, Houken from Hiroshima and Kaiun Daiginjo from Shizuoka. 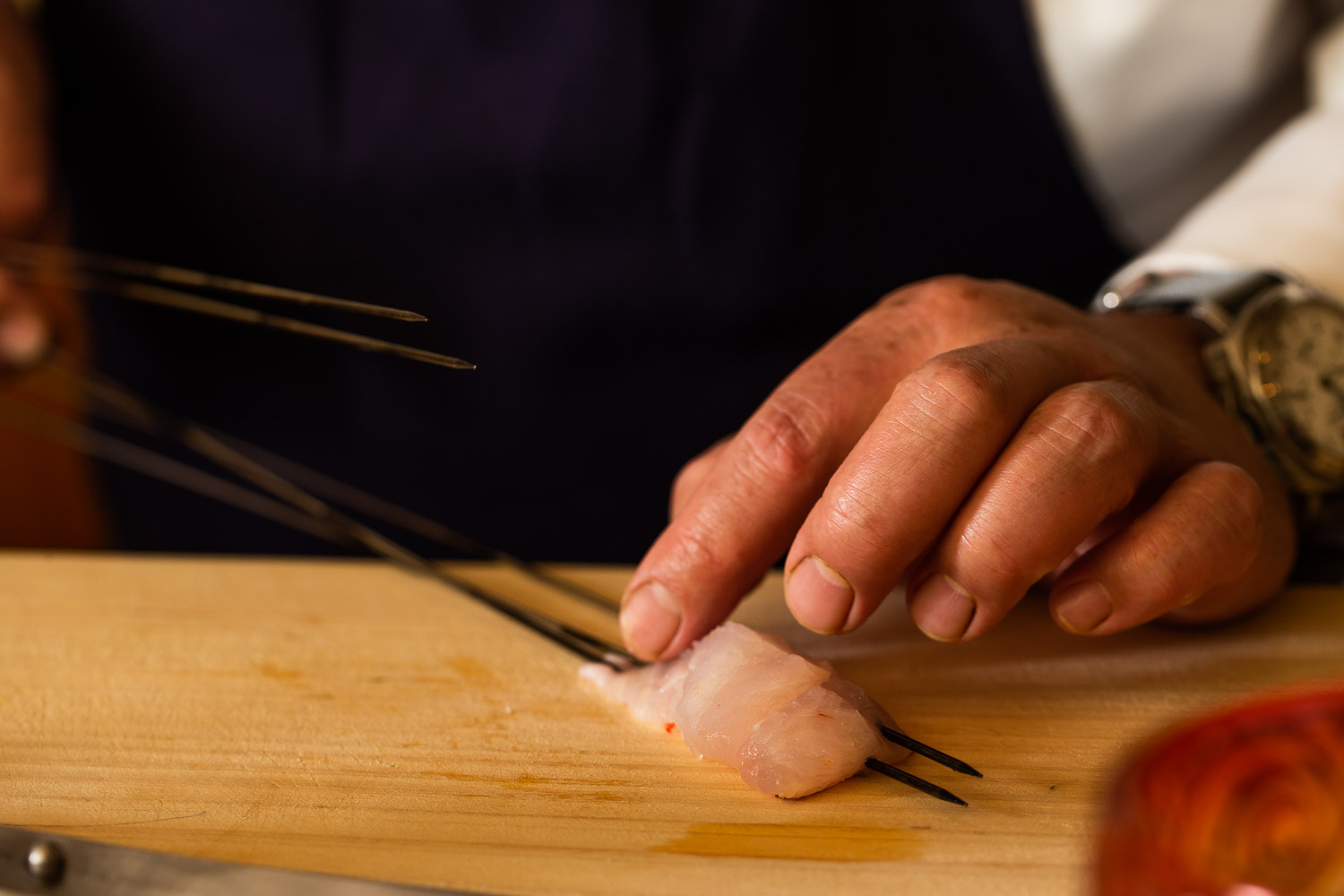 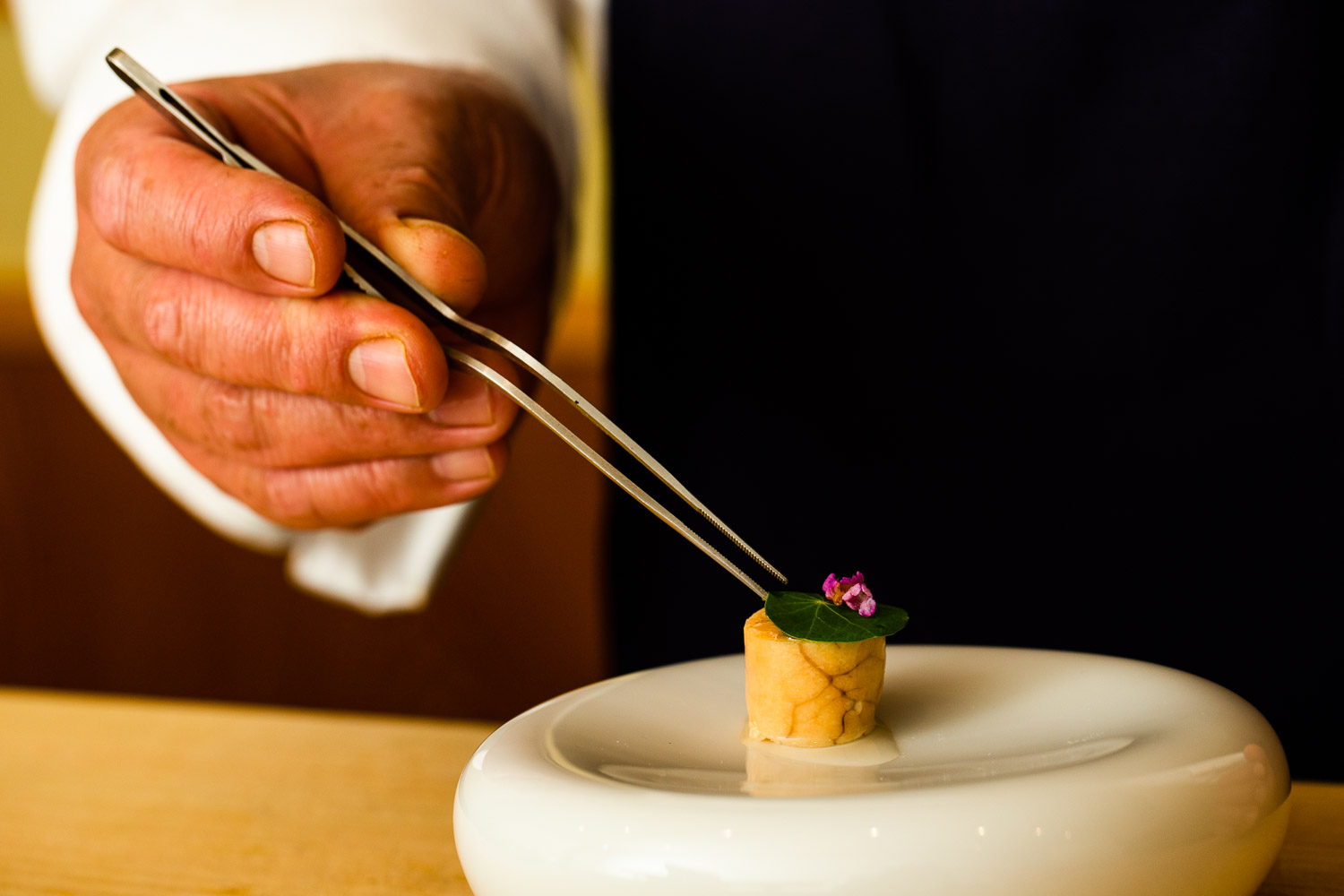 Hiroki Nakanoue was born in Kagoshima Prefecture in 1971 and grew up in Osaka where his father ran a casual sushi bar that catered to the locals. Inspired by the world of sushi, he came across a book about Edomae sushi by a famous chef Yukio Morooka and became fascinated by the depth of the traditional style that roots itself in the capital of Tokyo.

“I want to become an Edomae sushi chef,” he told himself. While he dreamed of training in Tokyo, he began his apprenticeship after high school at a restaurant inn in Shiga Prefecture.

Just six month after he began his apprenticeship, his father suddenly passed away, leaving the family business to young Nakanoue. In order to support his mother, he spent the next few years manning the restaurant with no experience or teacher to rely on. All he could do was to start teaching himself, mainly through books. After filling his head with images and descriptions from cook books and food guides, he would get on a night bus to Tokyo to taste the sushi at top restaurants. He had no time to waste so he would go around four or even five restaurants in one day.

“I worked so hard and tried all sorts of ideas,” he remembers. “I wanted to establish my own Edomae sushi style.” Then, he came to an awakening. It was around when he was 27 or 28 years old that he realized he was too caught up on the idea of Edomae style and that obsession was restricting his creativity. Riding on his experience abroad, he decided to part with the traditional discipline and began experimenting. This became the beginning of what Sushiyoshi is today.

The source of his culinary inspiration comes from outside Japan. He frequently travels abroad to places like France and Hong Kong, where he not only visits local restaurants but walks around museums and explores other points of interest.

VISION Unsurprisingly, Nakanoue’s vision is set on international expansion. In 2018, he opened a sister restaurant in Hong Kong and another in Bangkok. Next, he is considering China and France.

“Michelin isn’t everything, but it’s a big deal for me,” he says. “ I would love to win their recognition abroad too.”

During his last trip to France, a local chef gave Nakanoue a large French oven as a gift. He loves cooking fish or seafood soup in the cast iron cocotte, just like his French counterparts.

“The base is thick as 3cm, which is how the pot can retain heat,” he explains.

Behind the open counter, you will also notice that he is a fan of the Gastrovac, the vacuum-packaging machine that chefs at modern gastronomic restaurants like El Bulli also use. The high-tech appliance helps the sushi chef challenge the potential of sushi even further.