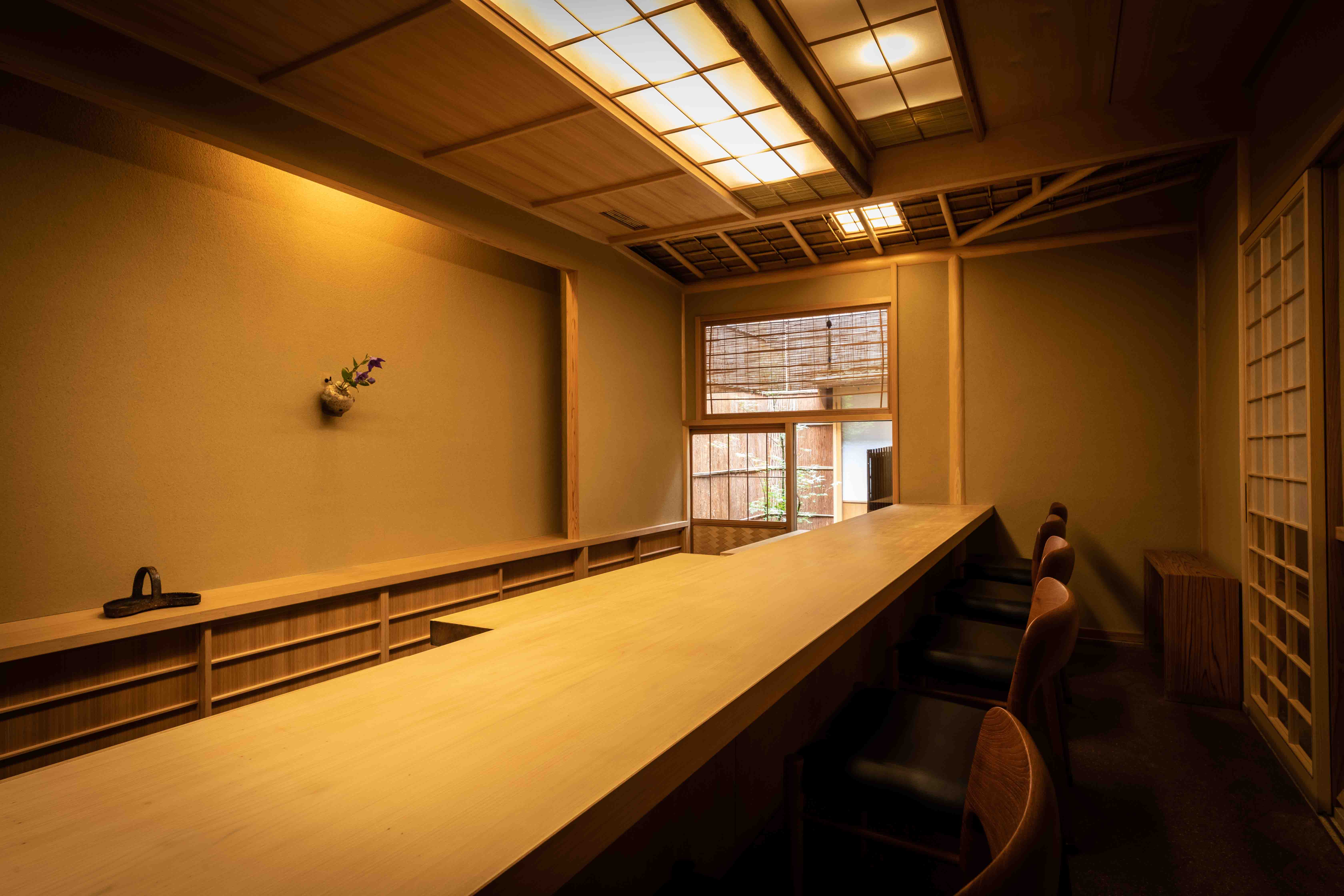 A gourmand always relishes the chance to try something new, and at Nihonryori Kataori, dish after dish offers delicious surprises. The refined ambience belies its relatively remote location and the chef never misses an opportunity to showcase the bounties of Kanazawa and the Hokuriku region. Kataori is the perfect excuse to venture into a less familiar part of Japan.

In the deeply atmospheric town of Kanazawa, a chef has staked everything on local Hokuriku produce. Having developed his skills at the famous local ryotei Tsuruko, Kataori went out on his own presenting clean, minimalist cuisine that beautifully conveys his talent and sensibility. Elegance flows through the interior to the tableware and is deeply infused in the service style.

Kataori can be found on Kyoka no michi, a path that oozes Kanazawa style leading from Tenjinbashi Bridge spanning the Asanogawa River. With going independent the ultimate goal, the chef had great foresight purchasing the location eight years prior. Majestic pine trees line the river where the restaurant is located, just across from the breathtaking Higashichaya district. Hanging on the simple exterior is an unadorned sign with the characters for Kataori, penned by the chef’s former master, Saburo Koda.

The interior was created by a local sukiya tea house style designer and includes beautiful local touches, such as a single plank counter made from a variety of Noto Hiba cypress called ate – Ishikawa’s prefectural tree. The floors are made from the same stones found in the walls of Kanazawa Castle, excavated from nearby Mt. Tomuro. And the chef’s beloved chairs are refurbished antiques. The tableware collection has grown over ten years and includes Rosanjin pieces and works by renowned Kutani Ware artists Seika Suda and Eiju Yaguchi, as well as antique pieces from many artists connected to Ishikawa Prefecture. For a final touch, wild grasses and flowers adorning the alcove are picked personally by the chef each morning on his return from Noto and then arranged by the restaurant’s proprietress, the chef’s wife, Hiromi.

Upon entering, you will be greeted by Hiromi and led to a waiting room deep within the restaurant. Here you are treated to a welcome befitting the season, like a piping hot towel in the heat of summer, which the hostess suggests you place on your nape. Then be soothed by a cup of tea, perhaps brewed with candied green plums and brown rice. Once you have settled into the moment, you will be shown to your front-row counter seats. Take a seat and allow the chef to show you his intentions for the meal by pouring each guest a cup of local sake from Ishikawa brewer Furuta Shuzo.

Incredibly simple cuisine showcasing Hokuriku produce with no unnecessary adornments. This style demands a discerning eye and commitment to securing the very best produce. The daily sourcing of ingredients becomes a crucial step in the cooking process. Extremely clean and refined flavors in no way lack impact, and within the simplicity there exists a sense of surprise and originality, as seen in the paper-thin slices of abalone and the novel pairing of vinegar soy sauce and mustard with chargrilled eel. It’s the chef’s effort in the parts guests don’t see – employing traditional Japanese techniques to ensure the ingredients star – that ensure delicious, satisfying mouthfuls. The five senses seem to be increasingly stimulated as the meal progresses.

Cuisine driven by ingredients means a daily changing menu, but one constant is the dashi – the very foundation of Japanese cuisine. The finishing touches are added right before guests’ eyes as the apprentice shaves the most premium special-order bonito flakes from Makurazaki, Kagoshima. The dried aged bonito is only made with fish that did not come into contact with the net and therefore suffered the least stress, and when shaved it releases the most magnificent aroma. It is added to stock drawn from premium Kafuka Rishiri kombu steeped for 40 hours in the miraculous local Fujise water. The small cup of dashi you are given just before the lidded dish arrives permeates your whole body with incredibly comforting flavor.

With no menu, part of the pleasure and excitement of sitting at the counter is gaining clues as to what may come next. Even then, many of the ingredients can't be found elsewhere so flavor surprises still abound. And that's why you need to dine at Kataori for yourself.

Nestled within the lidded dish adorned with seasonal motifs is a crab dumpling in a warming and deeply satisfying dashi soup. Adamant that the local variety is no less exquisite than

Oma brand maguro from Aomori, Kataori serves chutoro from maguro caught off Himi, Toyama with a soy-based sauce. A local eggplant variety called Hetamurasaki is served with sea urchin from Obama, Fukui, in a dish whose simple yet stunning presentation gets the taste buds excited for the authentic flavors within. Abalone sliced impossibly thin reveals Kataori’s skillful knifework and is served in the liquid it was just steamed in. The flavor is so satisfying, you will want to slurp it all up. A local delicacy, nodoguro black-throated seaperch from Himi is served with finely shaved Kanazawa new cabbage – a simple yet incredibly delicious match, accented by a salty-sweet sauce. Kataori’s unagi eel comes from Mikata Five Lakes, not known by many, and the service style is equally unusual: lightly grilled and accompanied by the refreshing combination of hot Japanese mustard and vinegar soy sauce.

INGREDIENTS
Kataori is about a devotion to local Hokuriku ingredients and all his ingredients are pure and natural. Blessed with both mountains and seas, guests will delight in everything this land has to offer. From wild vegetables, bamboo shoots, shellfish and coral trout in spring; to ayu sweetfish, kuruma shrimp and unagi eel in summer; followed by the autumn riches of mushrooms like heady matsutake; and the winter specialties of crab, yellowtail and the highly-prized mayoigatsu – the delicious fatty bonito so named as they seem to get lost in the Japan Sea before being fished in Toyama.

Kataori gets in his car and heads for Noto and Himi in time for the morning auctions to source his vegetables and seafood. He calls in on farmers to make purchases and listen to their thoughts as he joins them in harvest. Local meats like deer also make an occasional appearance on the menu. By heading straight to local ports, Kataori has access to the freshest and most premium seafood like crab and torafugu pufferfish. He can also source rare unagi eel from the Mikata Five Lakes area – named for five lakes which straddle the towns of Mihama, Mikata County, and Wakasa, Mikatakaminaka County in Fukui Prefecture. On the road home from Nanao, he detours to Tatsuruhama to draw water for his all-important dashi from a spring called Fujise no Reisui – miraculous water according to ancient legend. Kataori’s sake selection focuses on local brews, while the broader beverage list includes French wines and champagnes, as well as local Noto wine. 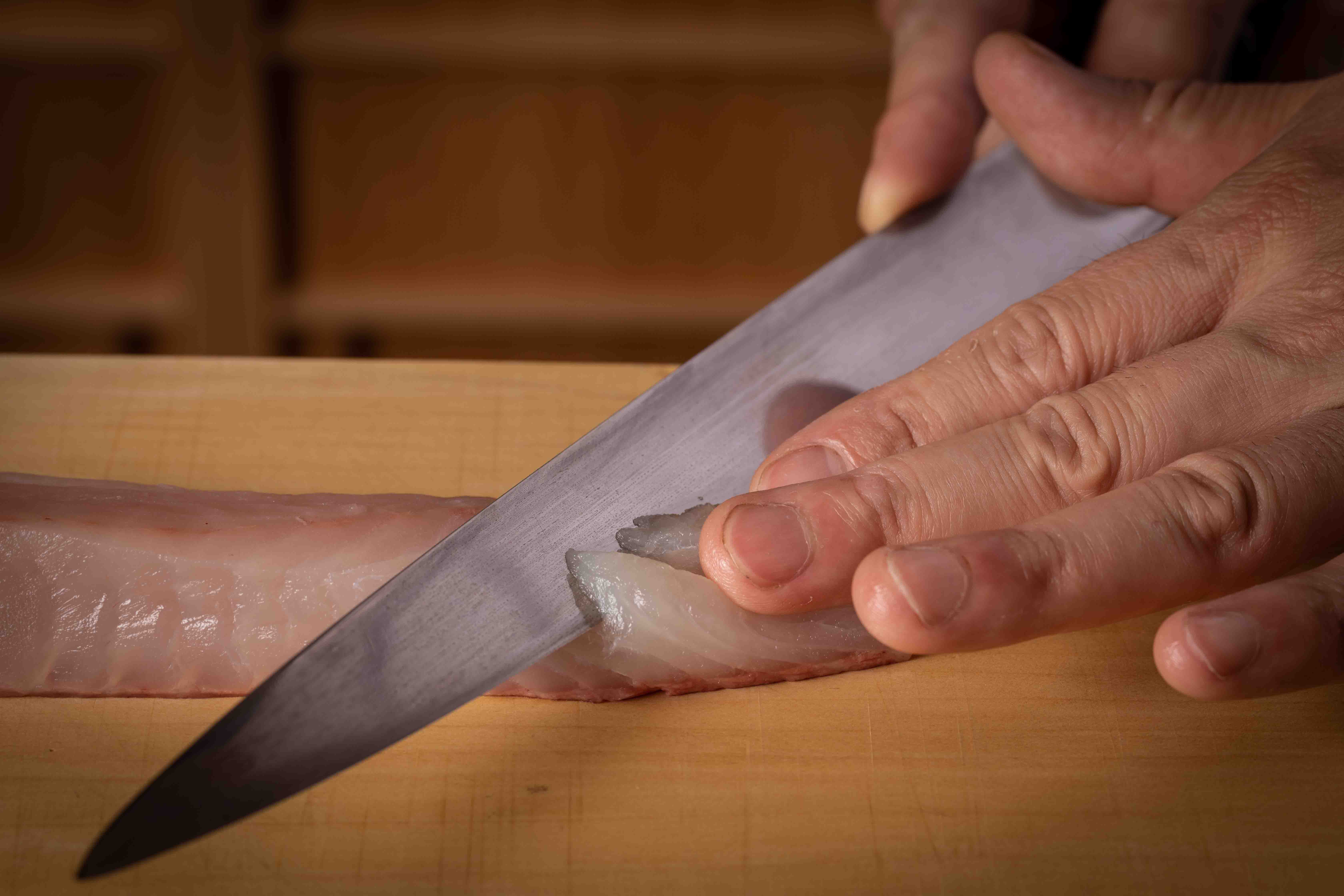 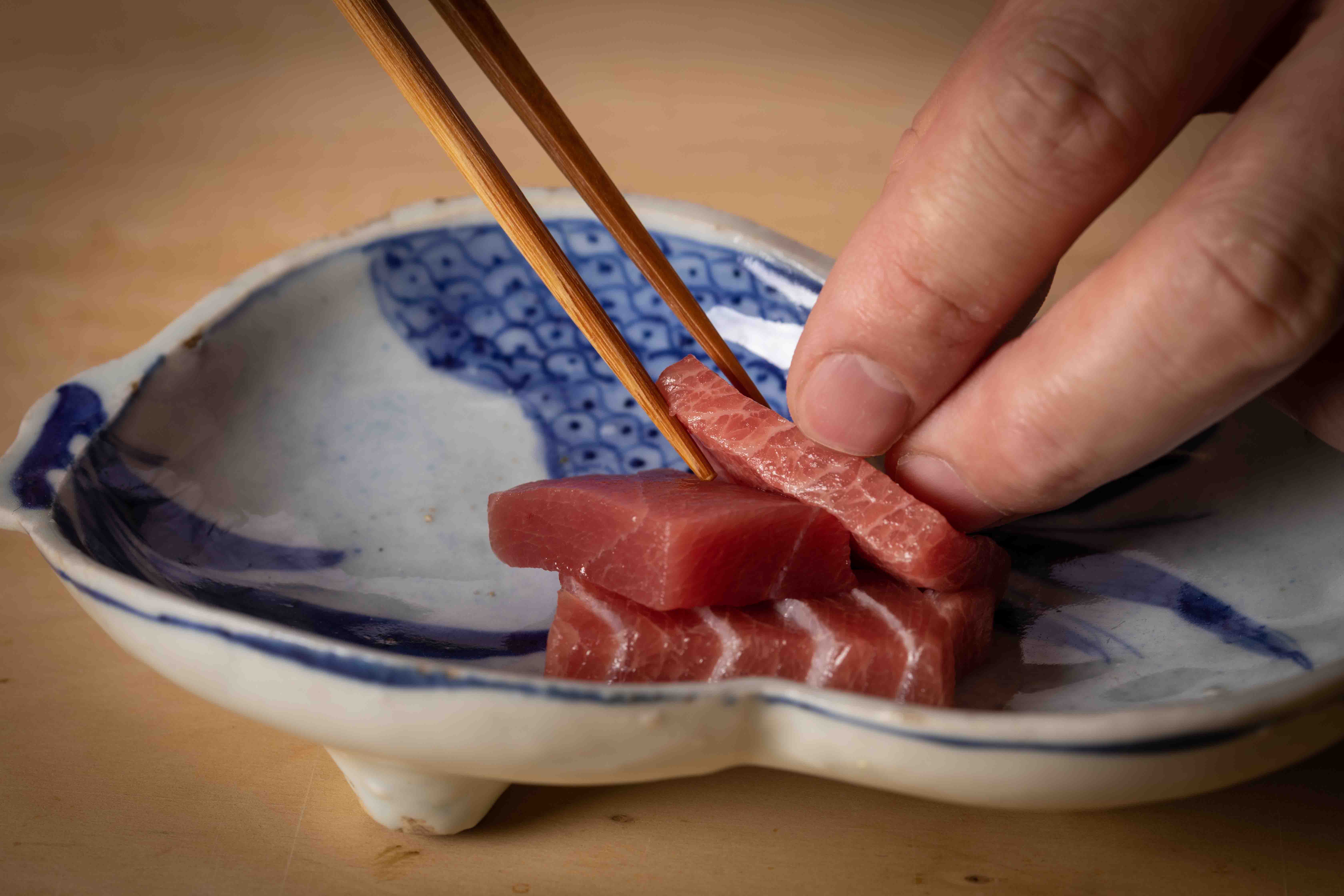 Takuya Kataori was born in Ishikawa Prefecture in 1983 and raised in Himi, Toyama. Entry into a Kanazawa cooking school offered the chance encounter with Hiromi, his now wife and Kataori proprietress. Together they joined the famous local restaurant Tsuruko, and Kataori spent 11 years carefully learning everything he could. Just as he contemplated going independent, out of the blue an offer came from the head chef of the historic Gyokusen-tei, who had been speaking with Kataori’s wife. He accepted the role and worked for four years, earning the restaurant a Michelin star in the process.

From that time, he had already begun considering his own style of cuisine and that’s where the vision began to create a restaurant based entirely on Hokuriku ingredients. It became a reality in May 2018 thanks to a wonderful balance between the chef’s diligence, passion and refined sensibility, and incredible teamwork by husband and wife. With five years of top-level culinary experience and an additional seven years of service experience, proprietress Hiromi dressed immaculately in kimono is the perfect host, offering excellent dish descriptions throughout the meal. Kataori wakes at 4:30 am daily to make the 90-minute trip to Nanao port to source ingredients before heading a further 30 minutes to Himi to secure more local specialties. His thoughts are entirely on the produce and menu planning as he drives. Preparation commences at 12:30 pm once he has returned to the restaurant. He says it’s a daily battle with himself. His wife says his eyes simply sparkle when he comes across an exquisite ingredient. You can sense the intimacy of husband and wife as she talks of his delight at securing 20 kilograms of kue longooth grouper one day and whenever he devises new dish ideas. While of course Kataori’s days are filled with anything to do with the restaurant, when he can find some time to step away from it, he loves spending time with his precious daughter and relishes those happy family moments.

VISION
Kataori talks of the happiness of his suppliers being paramount, be they vegetable farmers, fishermen or sake brewers. Nothing makes him happier than seeing their efforts succeed through his cooking and the restaurant. At this stage, every day is a challenge for Kataori, who opened his own restaurant just over one year ago, as he searches for ingredients and seeks to make ever more enticing menus. He perseveres with the unwavering support of Hiromi, his wife and the restaurant’s proprietress.

The chef’s motto is “produce local, consume local” and in an extremely heartwarming connection, the rice used by Chef Kataori is first-class Koshihikari grown by his own father in Himi, Toyama. It was not a biased choice. The chef travelled the country tasting countless varieties from each region before arriving at the conclusion that his father’s rice simply tasted the best. The opening rice porridge dish is made in a clay pot, whereas an iron pot is used to steam the rice that concludes the meal.

The freshest local ingredients all make their way to Kataori, including the most incredible kuruma shrimp in summer, and richly aromatic matsutake mushrooms in autumn. For the latter, the chef makes a six-hour roundtrip to his wife’s hometown of Suzu to harvest the matsutake himself before returning to the restaurant to wow customers with their heady aromas that evening. It’s beyond extravagant. Specializing in Hokuriku ingredients may be difficult, but Chef Kataori embraces the challenge.