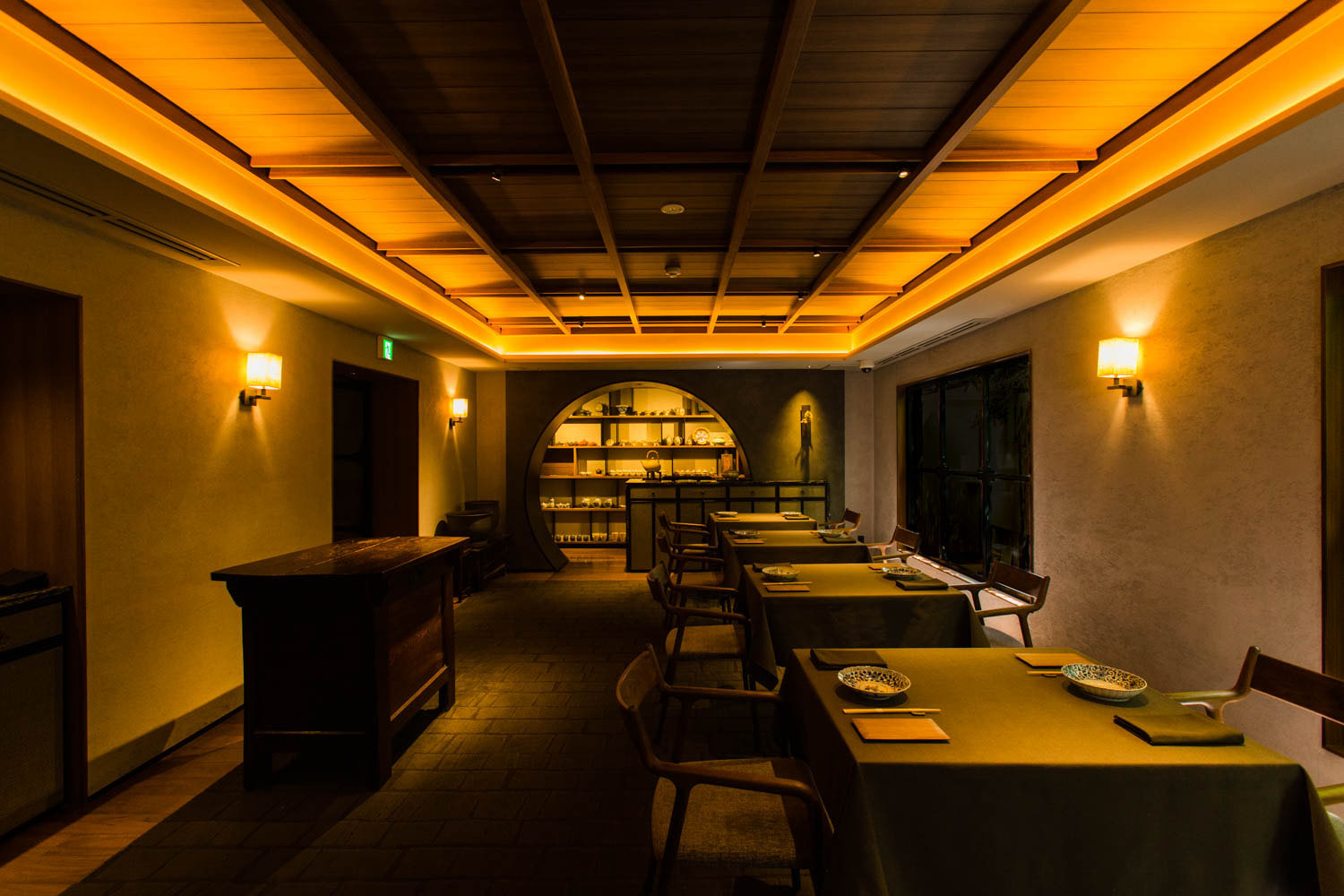 Embracing the concept of wakon kansai, Sazenka is a beautiful marriage between Japanese spirit and Chinese scholarship. Sophisticated, delicate and subtle, the two-star restaurant creates a new world of fusion cuisine by melding the ingredients, flavors and traditions of the neighboring cultures.

Hidden behind the swaying bamboo trees, Sazenka is located a quiet residential neighborhood of Minami Azabu. Known as the center of Tokyo’s international community, the restaurant is built on a former diplomatic estate, resembling a peaceful, classic Chinese tea house.

At the entrance, the multilingual staff warmly greets guests in Japanese, Chinese, English or French. The interior of the spacious main room is modern yet classic, applying both linear and circular lines. The polished wooden furniture and warm-colored lighting create an inviting atmosphere, while the large windows add a sense of flow to the room. There are also private rooms that offer a quieter setting for guests, including families with small children.

Led by a young and talented duo, the restaurant has been quickly recognized for its excellence, winning two Michelin stars within a year since opening. The bicultural and innovative cuisine is curated by the head chef, Tomoya Kawata, an expert in both Chinese and Japanese traditions. Kawata works closely with Ryoji Hayashi, CEO, who brings an extensive and unique set of experiences in the hospitality business.

“Everything about the restaurant needs to meet the quality of our cuisine,” Hayashi says, who is also a trained chef himself.

The restaurant showcases a priceless collection of classic artwork and tableware in every corner. Among the most memorable is a large dish that hangs on the stairway to the upper floor. The piece, decorated with a painting of a dragon, comes from Jingdezhen, the porcelain capital of China. At the tables, the place settings feature beautiful kutaniyaki plates, a type of Japanese ceramic, decorated with blue brushstrokes.

Resembling traditional kaiseki, the meal at Sazenka flows through a series of 15 or so small, beautiful courses. The recipes have deep roots to old Chinese traditions, which Kawata has accumulated over the years. At the same time, he reimagines those traditions under a new light by overlaying his own culinary styles and techniques.

“Only the insipid is pure taste,” he repeats an old Chinese saying that describes how the best of flavors manifest themselves in the simplest dishes. This powerful idea has become an important pillar in his cooking at Sazenka.

One of his signature dishes symbolizes this beautifully—the pheasant wonton soup. In contrast to its simple appearance, every drop of this clear soup contains deep and complex umami, condensed from cooking the carcass and blood of the bird for three to four days. Almost like a blend of Japanese dashi and Chinese shàng tāng, the broth warms you to the bones.

The appetiser is a wonderful collection of small and different delicacies. Curated on a square wooden tray, the first is a little green sudachi citrus fruit, carved out and used to serve a refreshing jellyfish salad, dressed with scallion sauce. Next to it are cubes of Japanese spikenard, tossed with aromatic kinome pepper herbs, and some soy beans infused with a blend of spices. On a separate plate are slices of fatty chashu pork belly that have been marinating in a special sweet and savory soy sauce for hours.

The next beautiful dish highlights another unique element of Sazanka—its extensive knowledge of Chinese tea. Served in a little ceramic grail, fine somen noodles are infused with fresh Kuding tea from Sichuan province, flavored with drops of pure white sesame oil. The noodles are served cold in the summer and warm in the winter, providing either refreshing or warming experience that compensates the season.

“Every dish has its right temperature that gives out its fullest flavor,” Kawata explains.

Trout fillets are steamed with seasonal mushrooms in a large piece of lotus leaf, which unleashes aromatic vapors as you unwrap the parcel. On the side is a long slice of the fish skin, first steamed and then fried for extra crispiness. Squeeze drops of sudachi citrus fruit to bring all the flavors together. Unknown to traditional Chinese cooking, he has also incorporated charcoal grilling to his recipes, a long-established technique in Japan. It allows for precision in how the ingredient is cooked, and adds incredible texture to the dishes.

The main dish is Hokkaido lamb chop—perfectly braised on the outside, pink and tender on the inside. The meat has been cooked in three steps, first in the oven, then grilled on charcoal, and lastly roasted over straw. Dusted with cumin and mala spices, the meat is bursting with different layers of aroma. Dip the fat in the hot and sour spice mix, served in a little black spoon on the side. The dish is paired with a small plate of Xinjiang tiger salad, full of spice and heat.

The sweet end to the fabulous meal is almond jelly with a twist. Served in two identical white tea cups, they each have its own character. The left is a Nanjing recipe, served warm and tastes sweet, while the right follows the Beijing tradition and is served cold and is made of arrowroot.

Ingredients
Kawata is all about searching across the continent for the ultimate ingredient, and coming up with the most simple and effective way to maximizing its natural flavor. For example, he finally set his hands on free-range pheasants raised in a beautiful farm set by Okuhamanako Lake in Shizuoka prefecture. Not only is the meat tasteful, the farm has found an ideal way to preserve the blood in its freshest state. This has made it possible for his soup to have that clear and pure flavor. 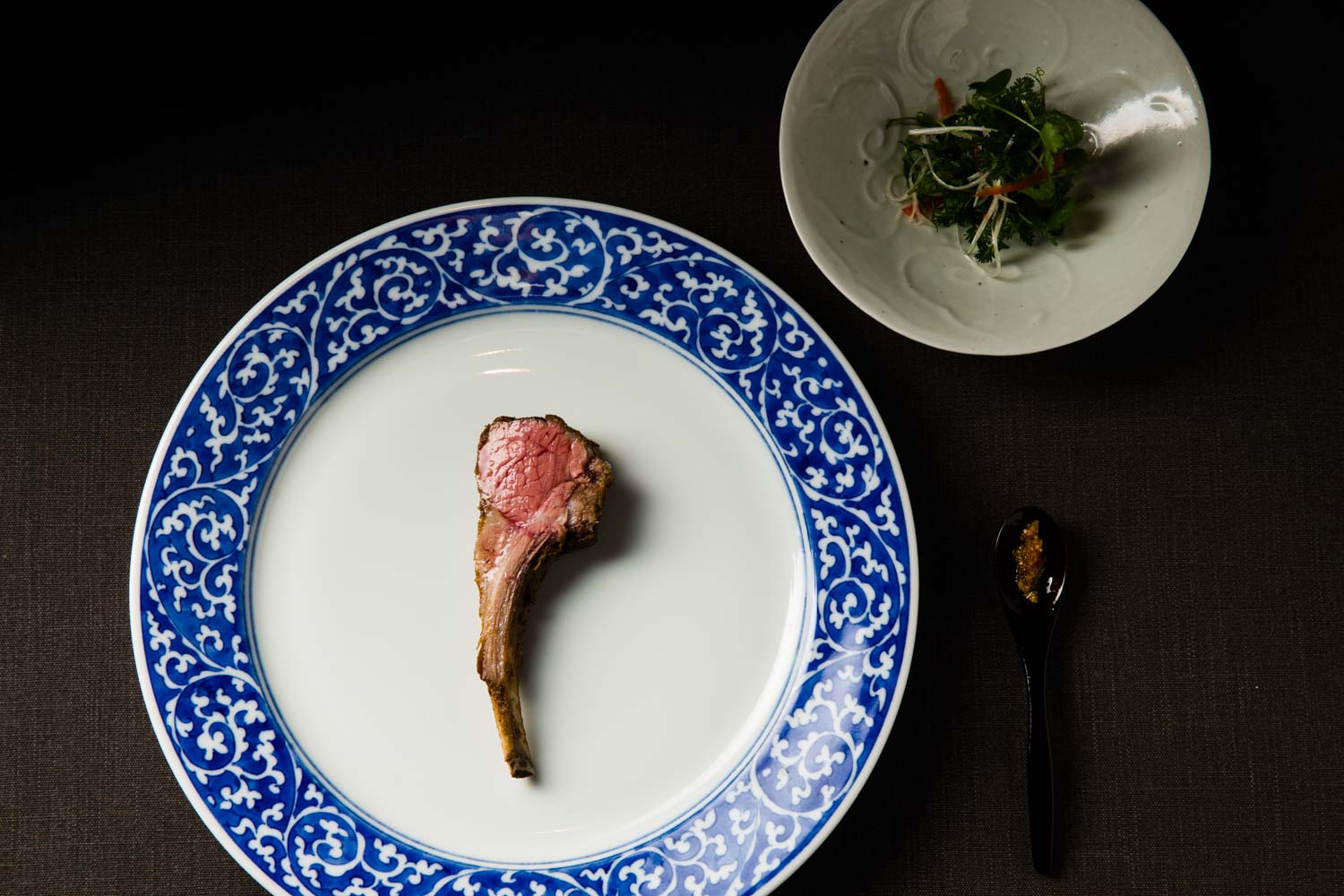 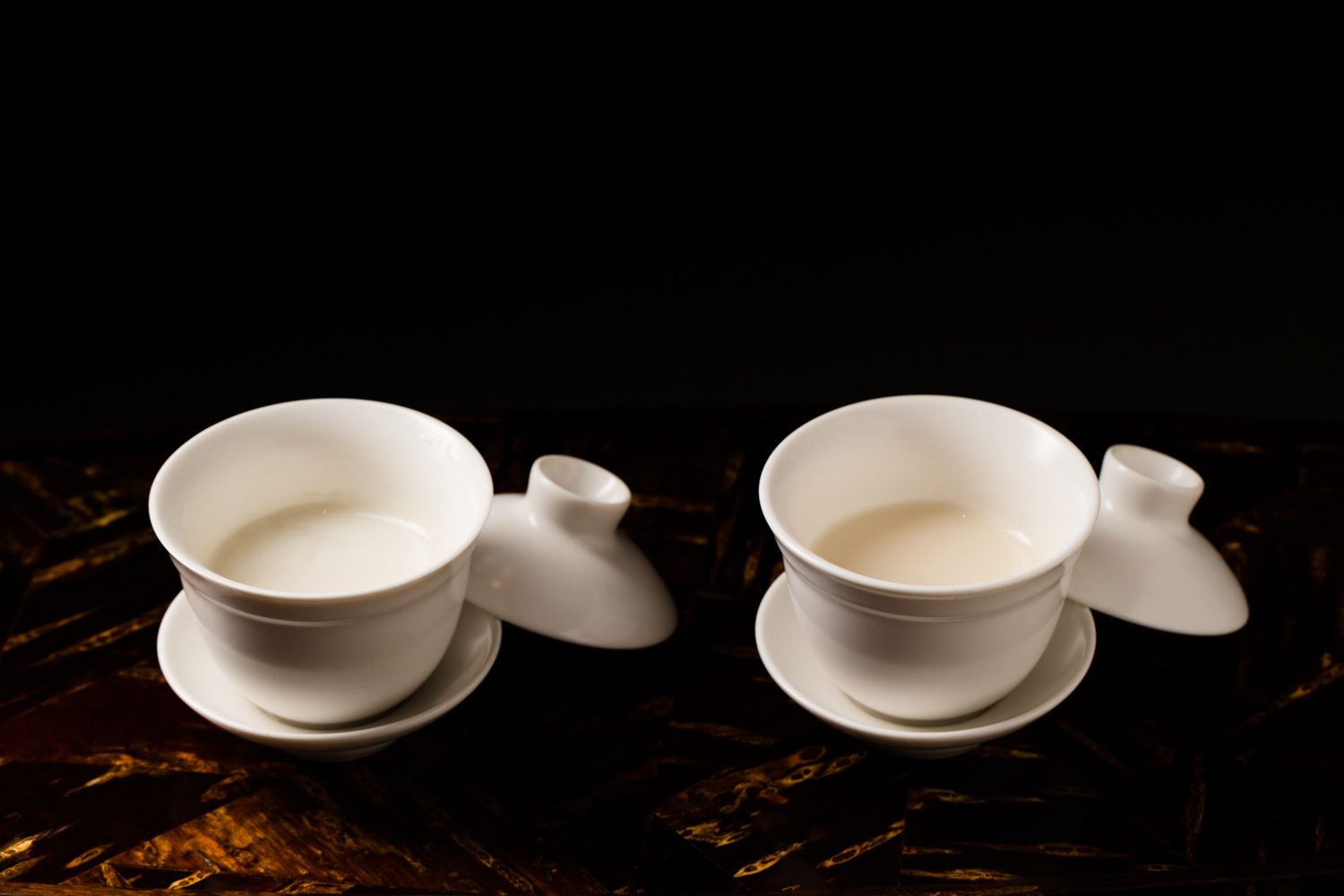 From an early age, Kawata dreamed of becoming a chef. By high school, he especially liked Chinese food and would make trips to Tokyo to explore the top restaurants in the city. It was the moment he tasted the dandanmian at the famous Azabu Choko that pushed him to pursue a culinary career. Astonished by the perfect balance of new ideas in the classic dish, he begged to join the restaurant and began working in the kitchen at age of 16. Thanks to his dedication and hard work, he rose up the chain to vice master chef by the time he was 26 years old.

After a decade of Chinese training, he came upon a realization that he couldn’t achieve his full potential as a chef in Japan without mastering the art of the country’s local cuisine. Despite his successful tenure at Azabu Chuko, he decided to embark on a new phase of his career and joined the Japanese restaurant, Nihonryori Ryugi. There, he gained an incredible amount of new experiences including mastering charcoal grilling, extensive preparation of each and every ingredient, and even helping open their branch in Taiwan.

Throughout his career, he made multiple trips to China in search for new ingredients and tableware, but also tea. Chinese tea has become a big passion for him over the years, making him an expert in its history and variations. He often experiments with new ways of enjoying tea such as pairing it with a dish or brewing it with sparkling water.

“Inspiration comes to me when I discover quality ingredients, whether it be traditional vegetables in China or high quality foods across Japan,” he says. “Every trip yields new ideas.”

Vision
Kawata’s goal is to materialize his culinary ideas into shape as diligently as possible. In order to do so, he says it’s important to continue traveling for new inspirations. When visiting places in Japan, he finds joy when discovering cultural roots and connections to China as they spark new ideas in him.

Another focus for him is to elevate the quality of the staff even more. The restaurant is not about the food alone but the entire experience including service.

Pairing is an important part of the Sazenka experience. The restaurant offers three types of pairing: alcohol pairing, tea pairing and a mix pairing of the two. The alcohol pairing offers a selection of western wines, Chinese wines and sake. The wine collection is made up of mostly Burgundy as well as some rare bottles from Georgia, Austria and China.

The restaurant takes pride in offering the rare experience of tea pairing. Some teas are brewed for hours from cold water. The pot made with sparkling water is a great match to fried dishes, while spicier teas are married to the meats. Every cup is unique and serves its own purpose.