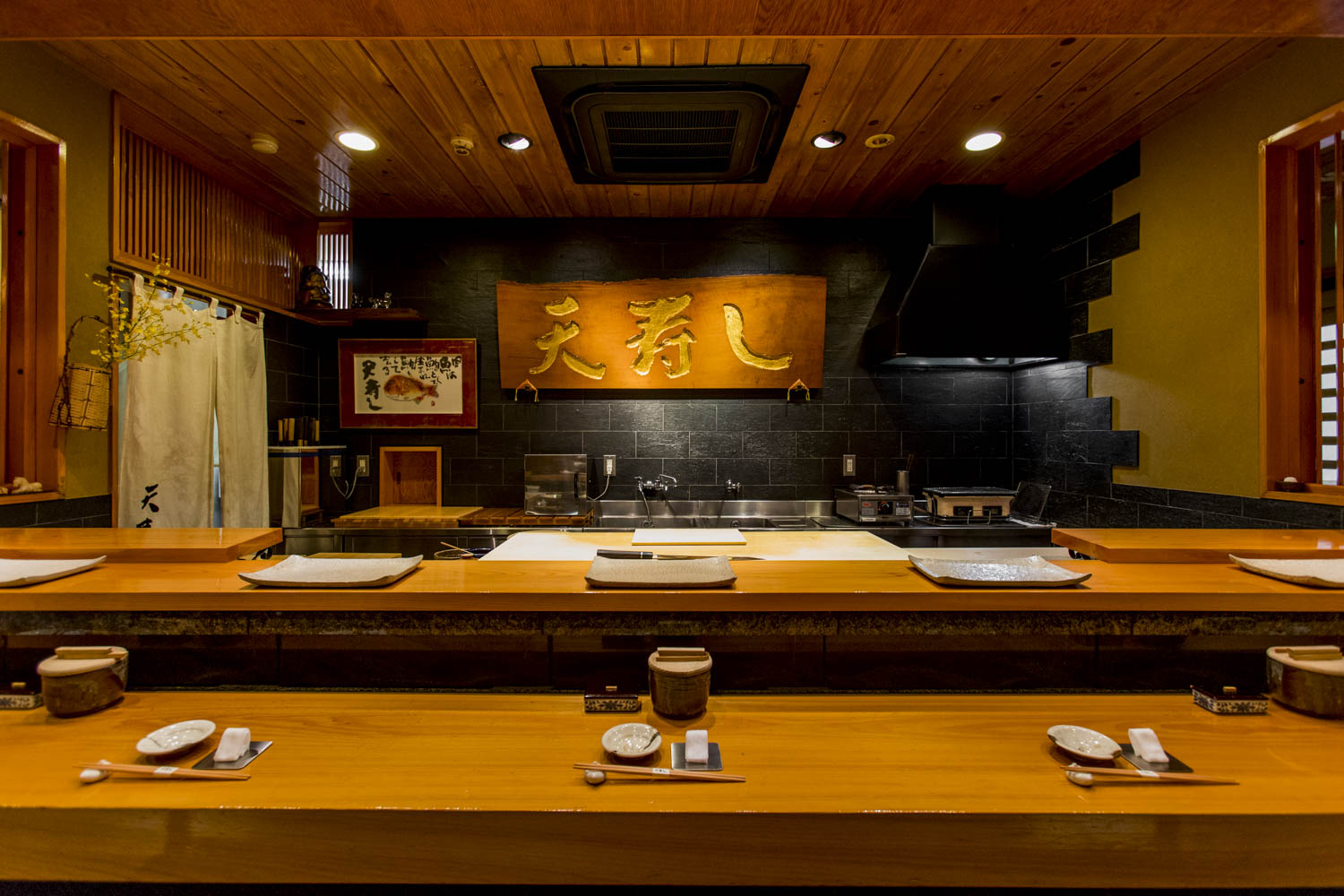 The most elusive sushi seat in Japan is found in the city of Kokura on Japan’s southern island of Kyushu. Gourmands from around the world jostle for one of just five seats at Tenzushi, which serves unparalleled cuisine described by the chef as “sushi by addition”. Inheriting the style forged by his father, the chef honors those flavors while constantly experimenting to take it to the next level. Behind his somewhat foreboding appearance, Chef Amano has a warm heart, greeting every customer and satiating their appetites for his unbelievable sushi.

Jump on a bullet train headed north from Hakata Station in Kyushu, and alight just 15 minutes later in a town called Kokura. A three-minute walk from the station and you will already notice the distinct lack of bars and eateries. Then suddenly Tenzushi appears. It began in 1939 as a street stall, but in the post-war period with increasingly strict health standards, Chef Amano the senior was forced to move his sushi business indoors, opening his first restaurant in 1949. It was just 15 years ago that the younger Chef Amano left the institution created by his father to establish is own.

A line of chairs by the entrance signifies the chef’s kindness – he would never want guests to wait outside. Passing through a beautiful draped noren adorning the entrance, your attention is drawn to the gentle sound of trickling water. As you are led to your seat, you are certain to be shocked by the scale of Tenzushi. Taking your place at one of just five counter seats is rather intimidating, but the chef’s smile sets you entirely at ease.

Sushi is best enjoyed with your hands, so beneath the two-tiered solid hinoki counter is running water with which to wash your hands and ready for the meal. The trickling sound combined with the Sarah Brightman soundtrack makes for a strangely comfortable ambience. Behind the chef, the black slate wall is accented by the characters for Tenzushi, which have been carved into a stately wooden signboard and filled with glistening gold leaf. Combined with a sparkling silver seaweed case, the grill, chopping boards, pots of salt and kabosu green citrus orbs, the scene looks like a still-life painting by Pissarro or Cézanne. It’s time to escape reality for moment and immerse yourself in that scene.

Also referred to as Kyushumae, the Tenzushi style is a world away from the Edomae sushi style invented in the region of Tokyo (formerly Edo) that most gourmands are accustomed to. Edomae has evolved from its origins as a method for preserving delicious fish flavors and textures for longer, applying various techniques to fish varieties that spoiled easily. In contrast, Kokura is blessed with its location in the middle of three seas and year-round access to deliciously fresh seafood. Thus the local style is about showcasing that freshness with touches and toppings that accentuate it. In Amano’s words, if Edomae is about subtraction, the Kyushu style is all about addition. There is not an ounce of conceit in his tone; he has utmost respect for the Edomae style and knows that the development of Kyushumae sushi would not have been possible had it not been for the groundbreaking Edomae style.

Amano’s father blazed the trail for Kyushumae sushi with years of experimentation, forging a style which is now being taken to the next level by Amano: aging isn’t really on his agenda, he very lightly marinates in vinegar if at all, and his super fresh, locally-caught seafood is accented by the simple flavors of Kyushu-grown salt and kabosu, rather than the rich flavor of a soy sauce reduction favored by Edomae chefs. Like topping fish with just a dab of pickled plum, his recipes are formulated through careful calculation of how flavors combine and evolve on the palate with methods than can only be described as culinary addition.

Take for example Tenzushi’s signature dish of akaika red squid nigiri: the exquisite red squid is topped with velvety sea urchin (usually a star on its own!), flying fish eggs, the baby shoots of sansho Japanese pepper, and a sprinkling of multicolored sesame seeds. The shrimp are lusciously sweet having been ever so briefly blanched to rare perfection. Marinated chutoro tuna is typically soaked in a bonito stock, but in search of a way to enhance the tuna’s innate sweetness, Amano marinates it in a dashi made from tuna flakes. Not only do the flavors burst forth, the marinade gives the tuna an extremely appetizing luster.

Baby aji horse mackerel is beautifully accented by the deep pink hues of myoga Japanese ginger, tiny green onions and kombu kelp from the tiny fishing village of Rausu on the picturesque peninsula of Shiretoko on the vast north island of Hokkaido. The more mature version of aji horse mackerel is served fresh with ginger and sesame, and in a genius twist, flecks of freeze-dried soy sauce powder, which slowly melt to release their flavor in your mouth. Kohada gizzard shad is very lightly pressed so as not to interfere with its extremely fresh flavors. You can also enjoy plump local Toyomae anago eel, and luxuriously fatty otoro tuna accented only by a sprinkling of salt. And while pickled ginger is the only palate cleanser traditionally found at sushi eateries, Tenzushi also provides deliciously refreshing salt-pressed cucumber.

INGREDIENTS
Chef Amano is totally devoted to local Kyushu produce, from seafood to vegetables and everything in between: organic rice from Oita Prefecture, Amagusa salt, and a wealth of seafood from brokers at central Kokura’s Tanga Ichiba, secured through relationships established in Amano’s father’s time. For some truly outstanding items, Amano deals directly with the fishermen, including a certain Mr. Toiyama in Yamaguchi and Mr. Ryoha in Ainoshima, off the north coast of Kokura. 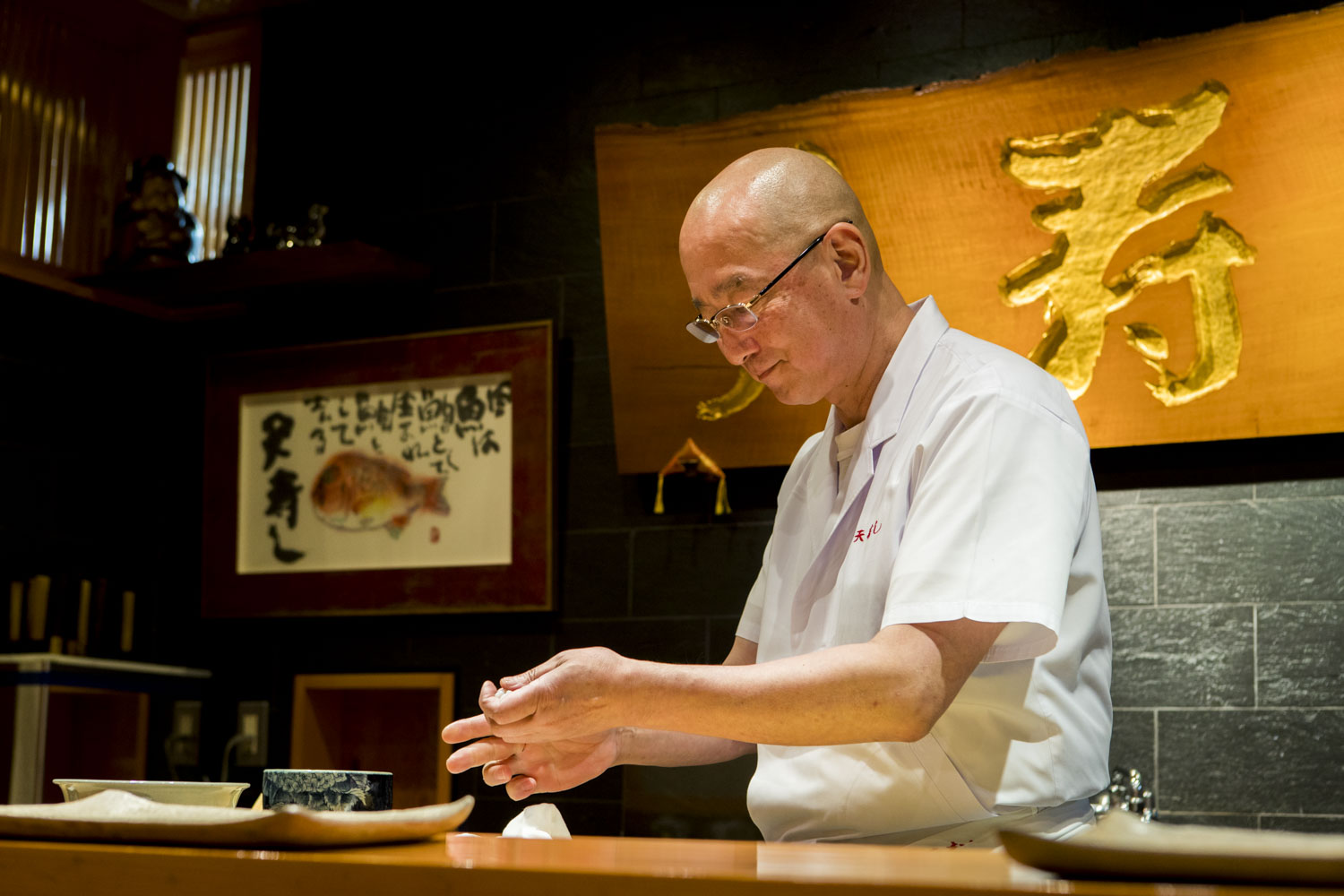 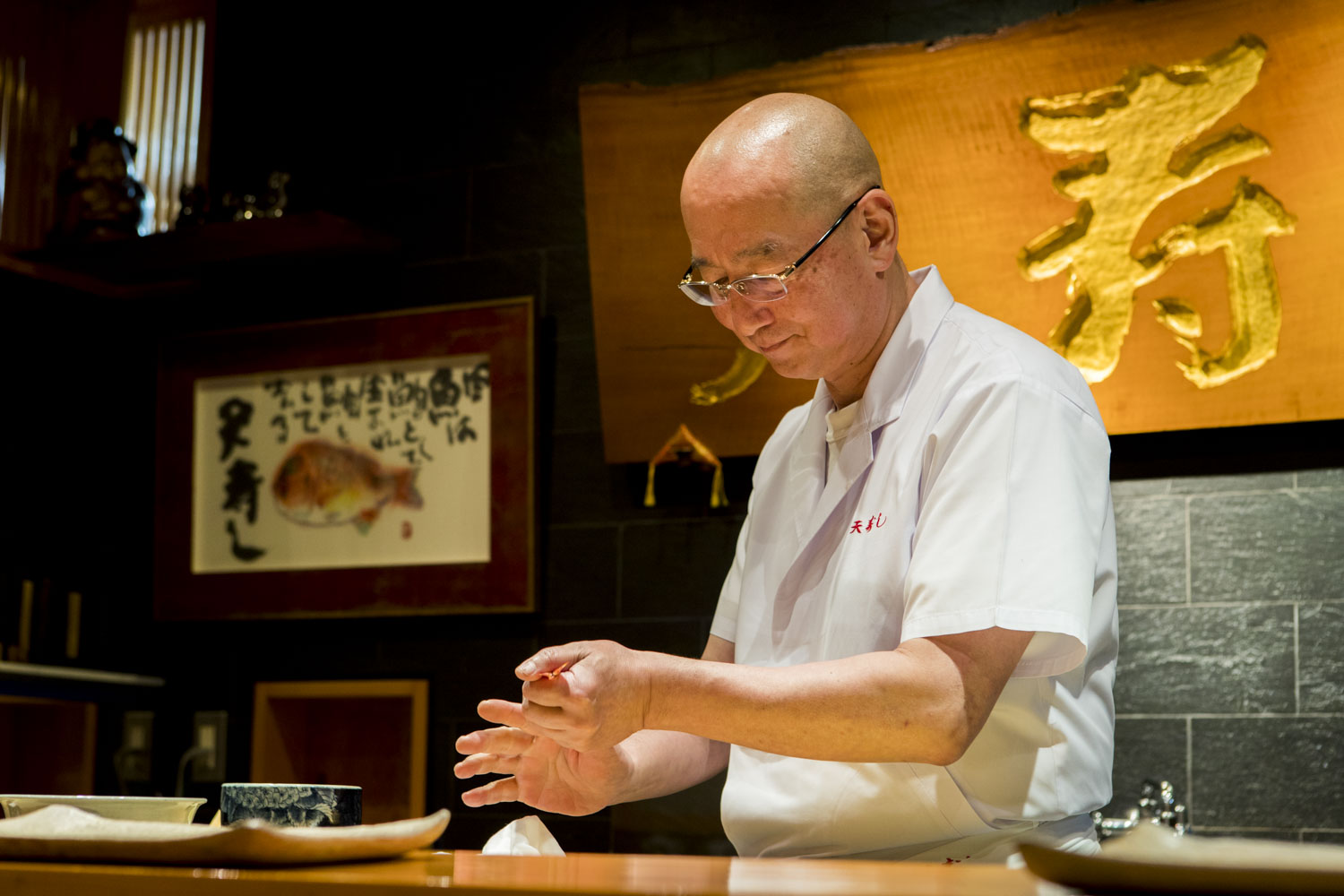 Isao Amano is a man filled with warmth, love and a strong sense of obligation. He has nothing but respect for his late father and the Kyushumae sushi he created, and he works tirelessly every day to take it higher and make his father proud. The youngest of four children, Chef Amano is now 62 years old. From as early as he can remember, he was fascinated by sushi far more than his siblings, heading straight to his father’s restaurant as soon as school let out to help and earn some pocket money. In an elementary school essay he wrote of his dream to one day become the best sushi chef in Japan.

He threw himself into volleyball during high school, but as soon as he graduated all his thoughts turned to sushi. With an eye to first learning sushi fundamentals he joined a sushi restaurant focused on the Edomae style. But it felt too far from his father’s style and after just six months he left to start from scratch again under his father’s tutelage. From that day onwards they worked together for 42 years, separated 15 years ago upon his father’s death. The restaurant where they had stood together all those years was taken over by Amano’s older brother, so he took the opportunity to go out on his own.

In line with his father’s philosophy, Amano laments the decrease of nigiri in favor of appetizer dishes in sushi courses and makes sure to maintain a large proportion of nigiri in his cuisine. Now with his profoundly successful restaurant where the phone virtually rings off the hook, Amano never loses his kindly, hospitable style, employing extreme care with every customer.

VISION
Amano is clear that the key is not in making something new, but in making the best from what you have before you. He certainly doesn’t believe that his work as a sushi craftsman is complete or that there are no new discoveries to be made; he is constantly trying new varieties of salt and topping combinations to create ever better flavor profiles. In his own unique terms, Amano says he wishes “to clarify further”, and humbly declares that although he doesn’t believe perfection is possible, that he at least wants to try to get close. In that pursuit, it is not simply about flavor – Amano is determined to wield his skills to give his guests the most satisfying dining experience possible from the time they pass through the Tenzushi draped noren until they turn to head home, bid farewell by the bowing heads of the Tenzushi team.