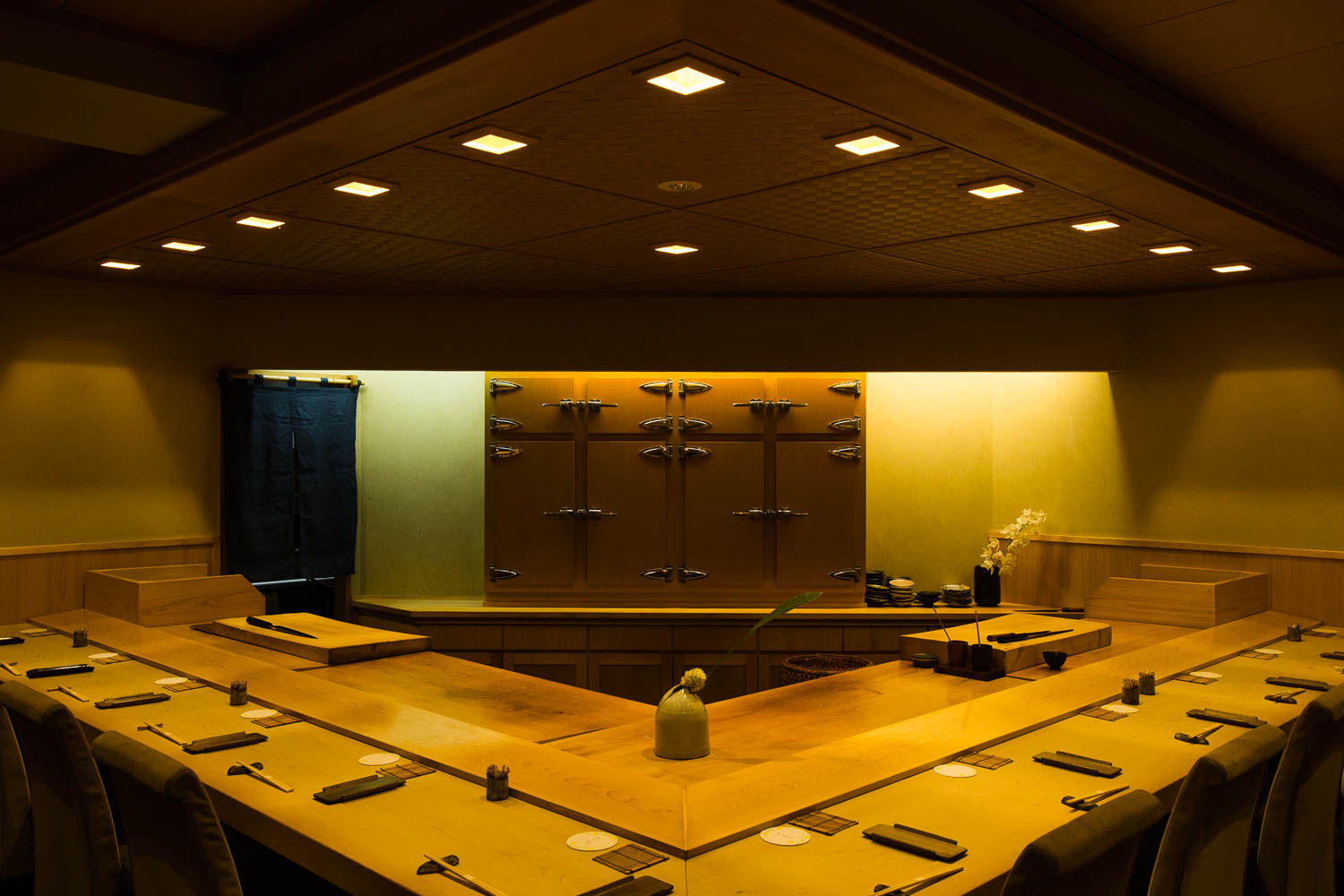 With refreshed aesthetics of the current generation as well as a new name, Sushi Shunsuke is embarking on a new chapter under a young master chef. Carrying on his mentor’s obsession with the perfect rice, Chef Shunsuke Takaoka is testing the potential of sushi even further with techniques he can call his own. Combining signature dishes with new flavors, the latest menu is redefining the value of this iconic Tokyo restaurant.

Originally known as Sushi Nanba before it was renamed to Sushi Shunsuke, it has lured fans from near and far over the years. First opening in Ogikubo in 2005, it relocated to a remote Asagaya suburb five years later, but that didn’t stop gourmands from trekking to taste founder Hidefumi Nanba’s cuisine. In 2018, he made the bold move of moving the restaurant to the new Hibiya Midtown complex, leaving Asagaya in the hands of his trusted 10-year apprentice, Takaoka.

Found on a quiet residential corner just a few minutes from the Chuo line station, the restaurant stands with an elegant entrance. Step inside the spacious room, a majestic corner counter made of kiso hinoki wood awaits to welcome the evening’s 12 lucky guests. Mounted on the wall behind the counter like an alter is a fridge with wooden panels and pretty metal latches, where the assortment of top-quality seafood is kept safely in perfect condition. It’s the favorite part of the kitchen, the chef says.

A new chapter under a young master chef

Based on Nanba’s philosophy, the cuisine at Sushi Shunsuke is 80% about the shari, the sushi rice ovals on which the seafood rests. Examining every possible factor from firmness, sweetness, aroma, and most importantly, temperature, the restaurant presents you with delectable morsels of fish and rice whose formulation has been calculated down to the degree.

To bring out the natural flavors of each seafood, he prepares two tubs of rice, each with different amounts of red vinegar and white vinegar. Oilier fish like gizzard shad and other blue fish are paired with red vinegar, while white fish and shellfish are pressed together with white-vinegar grains. Contrary to common thinking, he thinks rice vinegar is the best match for tuna.

While honoring his master’s techniques, Takaoka is unafraid to add his own twist. Tairagai or pen clam, for example, is typically dipped in soy and wrapped in seaweed but he prefers to marinate it with white miso and mirin for a sweeter flavor. A unique and rather strenuous technique he devised to prepare octopus is to beat the meat over three hundred times with a large sake bottle before slow cooking it in broth for over two hours. He blames this for why his right arm has more muscles than his left.

Every morsel of sushi is prepared with art of sushi craftsmanship. Botanebi prawns from Hokkaido are rested in between kombu for almost 6 hours, and served with shrimp miso that adds a sweet accent. The slice of barracuda from Chiba is broiled just on the surface for smokiness and texture, and sprinkled with salt and young green onions. White squid is sliced so thin you can almost see through it. The chef skillfully layers three pieces on top of the shari and drizzle a few drops of sudachi lime.

A signature tsumami dish combines two delicious delicacies: black abalone and monkfish liver. The thick and juicy piece of abalone is softened with many slits and steamed. The rich liver is drizzled in dashi broth sauce, creating a harmony of flavors. Seasonal anago eel is to be enjoyed in two folds. For tsumami, the fish is grilled and dressed with flavorful soy-sauce based broth and shichimi chilli powder, and served with refreshing cucumber. Gently pressed with red-vinegar rice, Takaoka likes to serve anago as the last sushi course.

To conclude the meal, he cuts slices of the signature egg cake. Sweetened with shiba shrimp, brown sugar and honey, the light and soft bites taste like dessert. Cooked 20 minutes on one side and 8 minutes on the other, they have this perfectly smooth texture.

INGREDIENTS
Leveraging the restaurant’s cultivated network, every fish at Sushi Shunsuke comes through Tsukiji. Rather than maturing the fish, Takaoka believes in the idea of resting it, whether it be a day for most sashimi, and a few more days for the slices he wants to use for sushi.

The rice, the heart of Sushi Shunsuke’s cuisine, comes from Fukushima. The Koshihikari grains are matured in low temperature for a year for greater depth. Equally important, the vinegar comes from high quality brands like Shiragiku vinegar from Mitsukan and Yohee from Yokoi Vinegar Brewing. The salt is sea salt from De Guerande of Burgundy. His favorite batch of octopus come from Sajima coast in Kanagawa, and has a wonderfully soft texture but the meat stays together even after beating and cooking it for a long time. 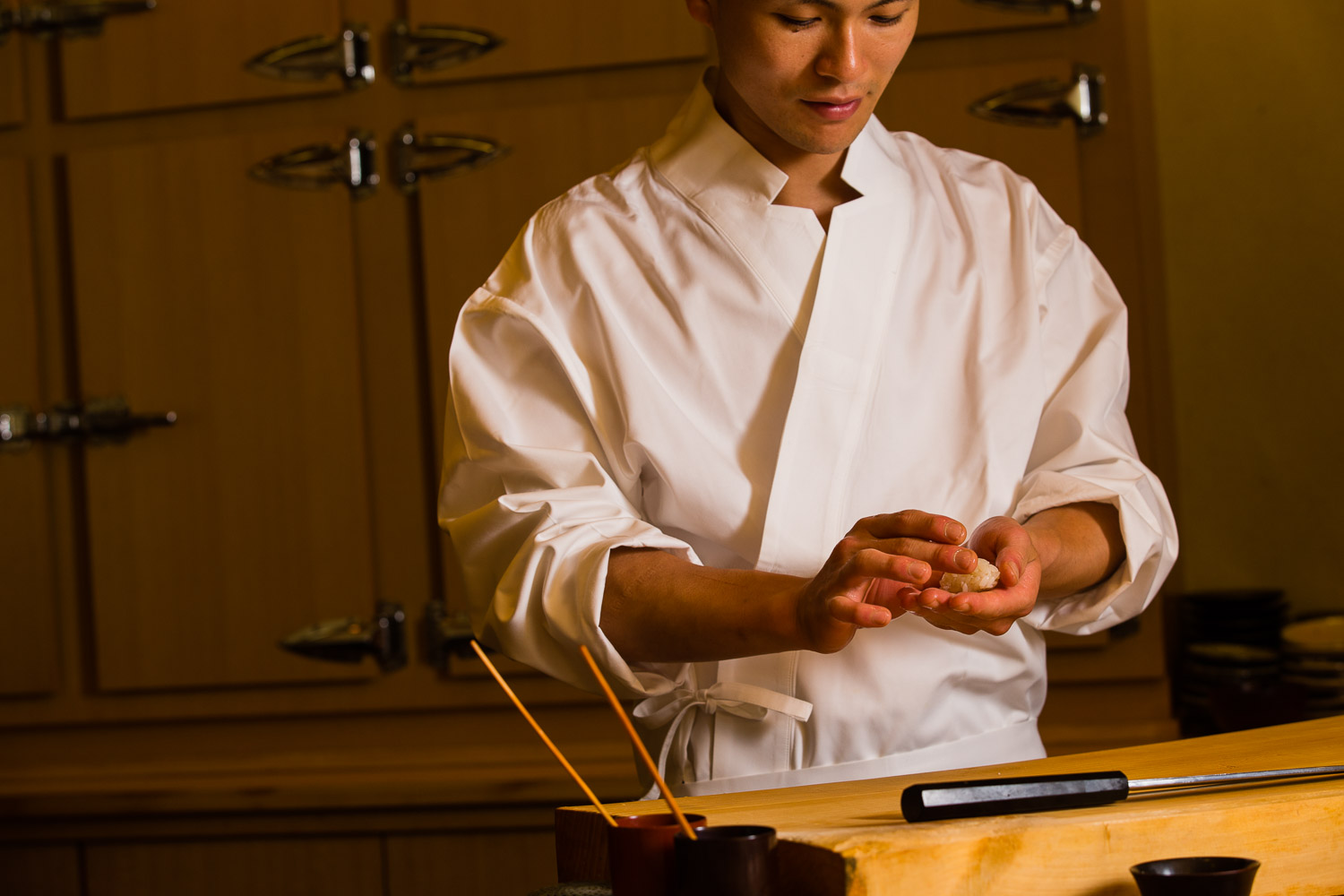 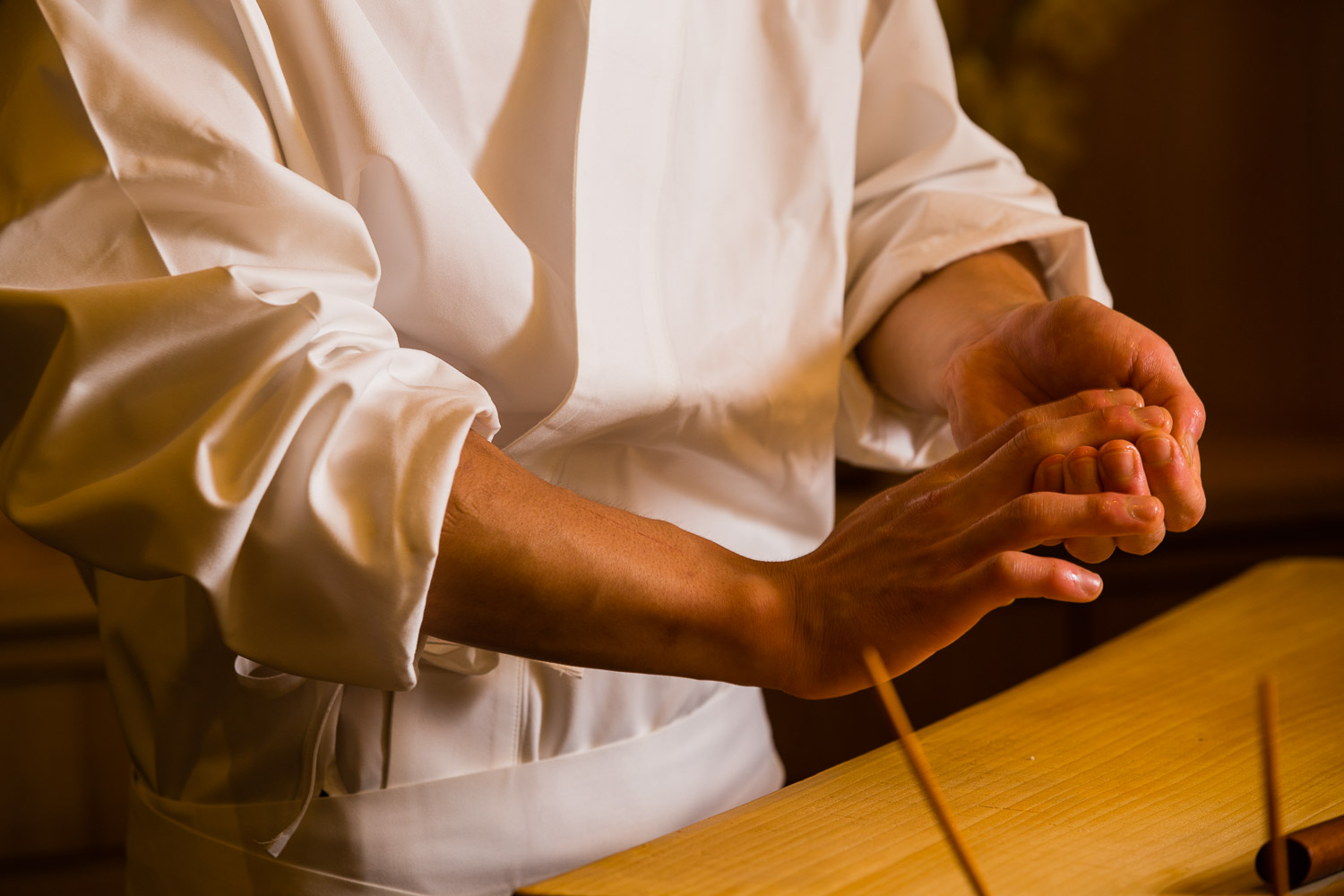 Born in Nakano, a busy neighborhood west of Shinjuku, Takaoka’s first encounter with the world of sushi was through a fishmonger he started working for at age 16. Within a couple of years later, he already had his heart set on mastering the way of sushi. Thanks to an introduction by a friend, he joined Sushi Nanba to start his training. Under Nanba’s guidance, he quickly internalized the various skills, and rose to the No. 2 spot within five years. By his seventh year, he was standing alongside the master chef.

It was not an easy challenge to accept when he was asked by Nanba to take on the Asagaya branch at age 29. “It was a huge pressure to take on such a reputable restaurant,” he explains. “But this is the place I learned everything over the past 10 years and I hope to give it my best shot.”

Outside work, he is a father of a 1-year old girl. “At home, I’m a non-stop babysitter,” he says with a sweet smile.

VISION
Still new to being the top chef, Takaoka is committed to dedicating everything to please every guest who comes through the door. He cherishes the familiar faces that have made multiple visits over the years, as well as the newcomers who are tasting the flavors of Sushi Shunsuke for the first time. Once he has a big enough team, he plans to open up the gorgeous private room in the back to entertain more guests.

“Now settled back in the area where I grew up, I hope to showcase the best of Japanese sushi to guests from all over,” he says.

A sake lover himself, Takaoka selects the restaurant’s drink menu. He prefers sakes with lighter aroma that don’t interfere with the flavors of the food. Among his favorites is a bottle called Somura, made by a Yamagata brewery he’s known for 7 or 8 years. As he likes the guests to enjoy many variations from the vast collection of 18-25 kinds of sake, he serves each order in small glasses. Don’t be shy to ask him for the best pairing with the cuisine and the hidden stories behind each bottle.