You may wonder if the appeal of Komada outweighs the challenge of its remote location. Just one visit and any doubts will be swept away. From the beautiful interior design perfectly fitting the feel of the old Japanese-style home and incredible warmth of the couple who runs it, to the dazzling skills and creative sense of the chef, you need to add Mie and sushi restaurant Komada to your itinerary. A visit to Ise Shrine will be all the better with a small side trip to this incredible treasure.

An elegant sushi restaurant in Ise City, Mie Prefecture, which is best known as the home of the culturally important Ise Jingu Shrine. Chef Komada honed his skills at one of Japan's best sushi restaurants, three-Michelin-starred Araki, before returning to his beloved Mie to open his own. The skillful combination of Edomae techniques and ingredients with delicious elements from local cuisine can only be enjoyed here, and as a bonus…the chance to discover a unique pocket of Japan.

In the Edo Period, this area flourished as the so-called kitchen of Ise. The town oozes atmosphere with many old buildings that remain. The property was recommended by a friend and Chef Komada immediately fell in love with the 40-year-old building which exemplifies the feel of the town. The location is hardly convenient, but it speaks of Komada’s great love for his home. Despite having the bounties of the sea all around, the Ise Shima area lacked a restaurant serving authentic Edomae sushi, so Komada’s appearance on the scene was a savior.

The understated signboard outside was crafted by a senior apprentice. It leads you into the door to pass through the garden and into the restaurant proper. Brilliant red carpet whisks you away to a different era – an escape from the every day. With dark timber walls to accentuate the varied colors of the sushi, and a persimmon-dyed draped noren, at every turn the interior design beautifully complements the style of the old Japanese home. Everything the chef needs is impeccably arranged at his fingertips; tools perfectly aligned, not a single superfluous object in sight. The elegant 4.6-meter counter is a single plank of local Mie hinoki Japanese cypress prepared by an artisan who has also worked on the majestic Nagoya castle. With just six seats, every guest gets a commanding view of the chef at work. A delicious performance awaits.

"Clear expression of his earnest attitude and the utmost care"

Komada’s sushi is a clear expression of his earnest attitude and the utmost care he gives to each ingredient. The chef’s omakase course is the only menu and includes four to five appetizers and twelve nigiri pieces. While the focus is on fresh seafood from around Japan via Tokyo’s Tsukiji Market, Komada skillfully weaves local specialties such as Ise-ebi spiny lobster and kuroawabi black abalone into his course. The presentation including salt, wasabi and sake, speaks of this place, giving the full experience of what can be enjoyed only here, pleasing local customers and determined visitors alike.

Simple in appearance but full of flavour owing to many steps of careful preparation, appetisers include seasonal dishes of white-fleshed fish sashimi, steamed abalone, vinegared sardines, Bering Sea cockles, and water shield plant. Nigiri seafood is typically served fresh, which is the chef’s preference over ageing. Local Mie Prefecture rice is seasoned only with red vinegar and salt and served above body temperature — a faithful re-creation of his former master’s style. Just like the chef, nigiri pieces are beautifully precise, providing the perfect melt-in-your-mouth morsels. Maguro from Oma Port, Aomori is presented as both five-day-aged akami and deliciously fatty otoro. This may be followed by salted kasugo young sea bream from Kagoshima, local Ise kuruma ebi prawns, and superbly luscious sea urchin from Karatsu, Saga Prefecture. Carrying on Edomae traditions, winter features nigiri of delicious steamed fleshy hamaguri clams, replaced by their equally tasty but smaller counterpart called asari in other seasons. The asari clams from Hamanako Lake in Shizuoka Prefecture are simmered for just two minutes and topped with the chef’s signature reduction sauce. Shime-saba vinegar-pressed mackerel is perfectly prepared in the traditional Edomae way, and the soft, almost fluffy texture of the anago conger eel is sublime.

INGREDIENTS
Ingredients at Komada are primarily sourced from Tsukiji, based on relationships forged since the chef’s days as an apprentice, and include renowned tuna broker Ishiji. And to the delight of customers who travel here from afar, Komada makes a point of including local Mie delicacies such as Ise-ebi spiny lobster from Ise City, wild black abalone from Toba, and sawara Japanese Spanish mackerel and kuruma ebi prawns, and torigai Japanese egg cockles all from Ise Bay. Komada sticks to a product when he knows he’s found a winner. Having fallen in love with luscious sea urchin from Karatsu, Saga, he is not willing to compromise on flavor and maintains dealings with the market in Fukuoka solely for that product. That extended effort is the sign of a top craftsman.

A blend of old Mie Prefecture Koshihikari rice is used for the shari rice oval bases. For the touch of green that adds a kick to each morsel, Komada uses fresh wasabi grown in the crystal-clear waters of Miyagawa, Mie, lovingly tended at the hands of Mr. Nishi, a solo 70-year-old farmer. The restaurant maintains a good balance of around eight famous sake brands from around Japan, accented by local favorites such as Zaku and Sakaya Hachibei, and even wine. 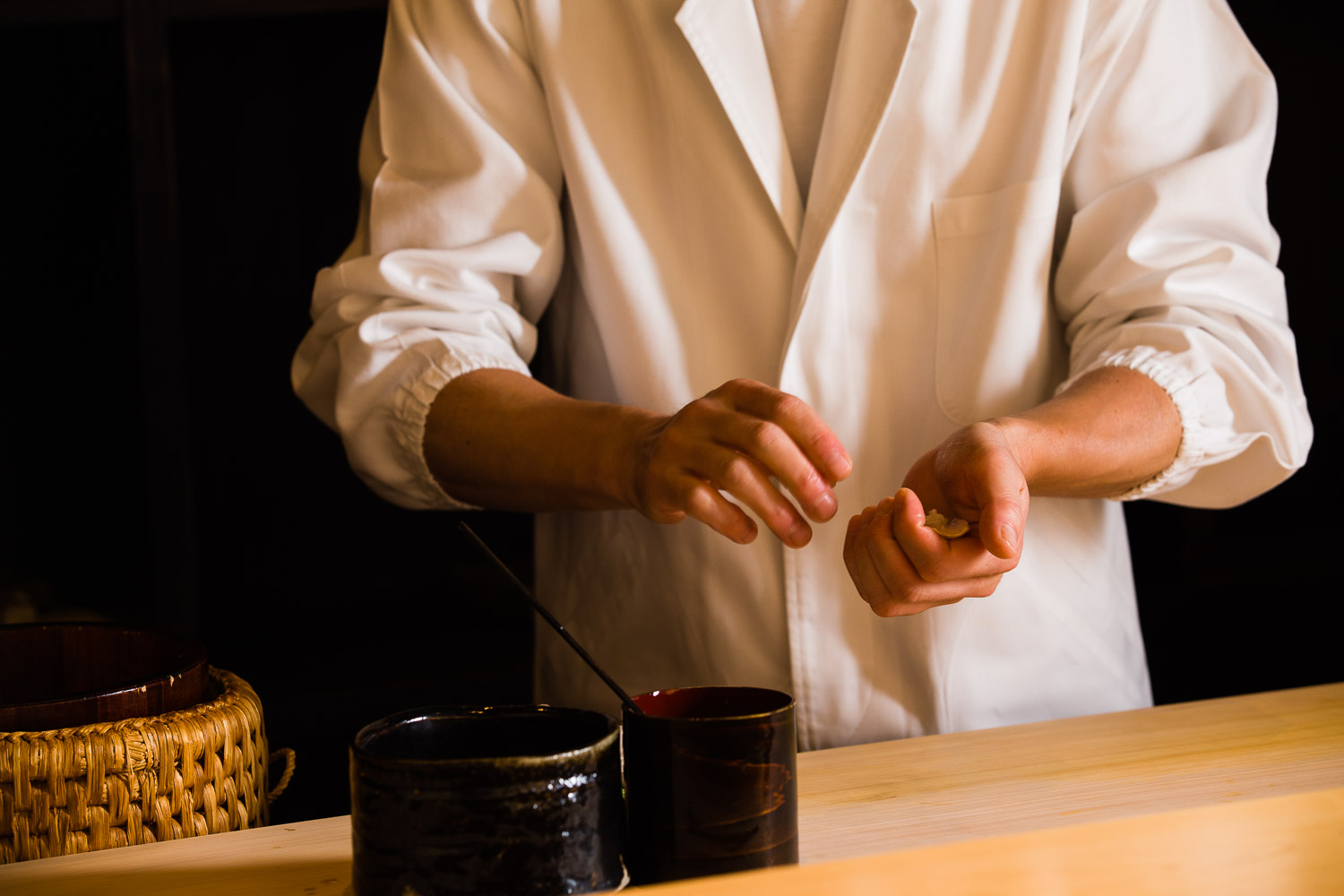 Chef Kenri Komada was born in Matsuzaka, Mie Prefecture in 1971. He graduated from university in Osaka and worked for a fashion company for four years, which may partly explain the incredible sense found both in his restaurant’s interior and food presentation. In his late 20s he returned to Mie with a simple desire to surf, supporting his hobby by working in the Japanese restaurant of a local hotel for three years. Still only 30 years old, he opened his own seven-seat counter sushi restaurant in Ise.

At 37 years old, despite already having gone independent, Komada found new resolve. He knocked on the door of Araki, at the time in Setagaya, Tokyo (but later in Ginza and now London), seeking to apprentice to Chef Mitsuhiro Araki. Of the countless Tokyo sushi restaurants Komada had dined at before, none were as outstanding as Araki. He was blown away by the flavor of the shari rice ovals and arrived on the chef’s doorstop seeking to absorb his mastery of sushi.

It’s an enormous challenge to embark on chef training at the ripe age of 37 but Komada was determined to see it through in order to fulfill his dreams. Having polished his skills at this premier restaurant, he left with both amazing techniques and a sharpened state of preparedness and headed for home. He opened his current restaurant Komada in 2013, running it with his wife who looks after their treasured guests. Made to feel completely at ease by this gentle-mannered pair, guests no doubt return time and again as much for the delicious sushi as the chance to be charmed by this lovely couple.

VISION
Six years has already passed since the founding of Komada and the chef steadfastly sticks to his motto of making the most of every day and meticulously pursuing his work. On holidays he starts without a plan letting the day and his mood carry him. He laughs as he talks about several years into the future: “maybe I’ll be thinking about opening a new space; maybe I’ll be right here same as now.“ Whatever Chef Komada decides, we will probably see an increase in chef’s following his business style of acquiring top skills at the best restaurants in Tokyo and taking them back to their hometowns to showcase local specialties. Within lies great value for the gourmands willing to stray from the beaten path.

While much of the tableware used to serve appetizer dishes is antique, Komada expresses a desire to grow at pace with his sake cup collection and chooses pieces from modern artists. He visits the private exhibitions of many artists with his wife. Iga-yaki ceramics made in Iga City, Mie, feature prominently in his collection, and Komada especially loves the works of Yo Tanimoto, Yoshito Sasayama and Masatake Fukumori. These pieces have an innate ability to convey the gentle warmth of the earth — the perfect fit for the space that is Komada.