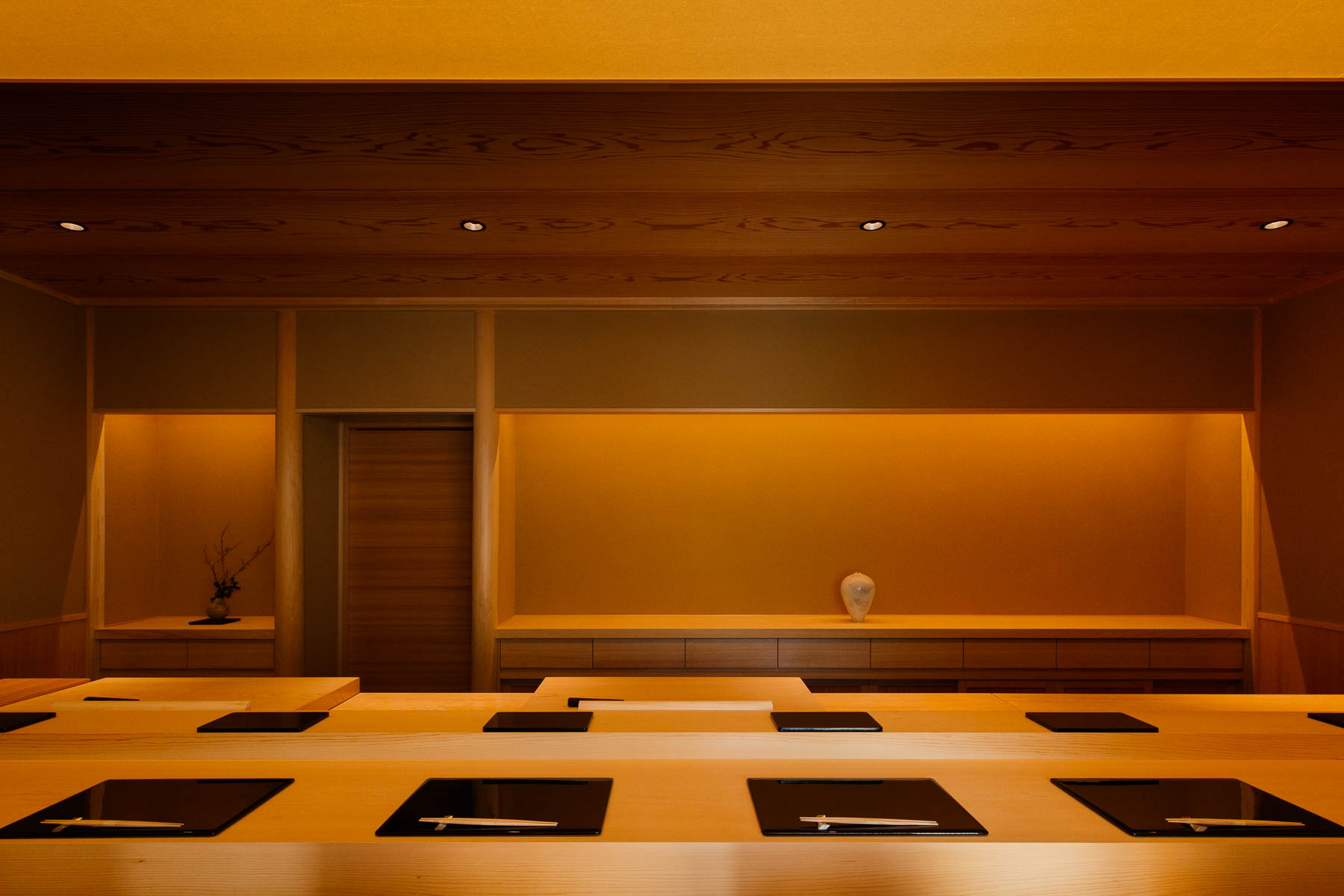 Run by chef Rei Masuda, who excelled his skills at some of the best sushi restaurants in Japan, such as Tenzushi in Fukuoka and Sukiyabashi Jiro in Ginza, the new Sushi Masuda opened two years and a few months after the closing of the former establishment. Already booked up by guests who have been anxiously waiting, the new restaurant features upgraded details from the previous one, which had earned two Michelin stars. With part of its fish sourced from his hometown Fukuoka, the exquisite nigiri is made with the highest level of craftsmanship and enjoyed at the luxurious counter seating.

Sushi Masuda, formerly located on Kotto Dori in Aoyama, moved to a new location and re-opened on January 29, 2022. He chose the same Aoyama area because of its atmosphere and the clientele. The restaurant is on the first floor of a new glass-walled building in a quiet area, just a few minute walk from Omotesando station. Upon entering the stylish door typical of the fashion and design companies in the area, another atmospheric entrance with a noren curtain greets us. Inside, the space features versatile use of natural woods on the walls and ceilings, and the eight-seat counter features a magnificent single piece of Kiso Hinoki cypress. The pure white chairs provide a pleasant, uplifting tension. The floor is made of stone and equipped with heating at the foot level, providing maximum comfort. The walls are decorated with seasonal Japanese flowers to welcome guests into the refined space.

The kitchen is three times larger than the previous location, making it easier for preparation with an enhanced capacity. The elegant trays that line the platformed counter are Wajima lacquerware. ”Using pottery or placing them directly on the counter is also appealing, while the glossy black trays accentuate the beauty of nigiri even more,” comments Masuda. The drink selection now includes champagne, white and red wines, alongside an exquisite choice of about ten types of sake.

Further from the noren entrance, the private room hosts up to six people with an L-shaped counter, carpeted floor, and a wine cellar in the back, presenting a different atmosphere from the main counter. The second chef serves the sushi at this counter. Additionally, the restrooms on the way to the private room feature exceptional details: the two are both equipped with the latest models, with large mirrors and a wooden design.

Masuda is acclaimed by Jiro Ono of Sukiyabashi Jiro, one of most prominent sushi chefs in Japan, as having an outstanding sense of taste. "If I had wanted to open the same sushi restaurant, I might have had the option of bowing down and asking to become part of the branch, but I chose to go on my own,” Masuda recalls. From the moment he became independent, he quickly made a name for himself as a first-class restaurant. Indeed, it is most fitting to call it the culmination of his career.

Traditional principles but progressive in thinking.

The only option available is the Omakase course, consisting of six to seven small dishes that accompany the sake for about an hour. After that, 10 to 11 pieces of nigiri, followed by maki and egg custard.

The small dishes change monthly. As an example in winter, the soup made by slowly simmering softshell turtles for two days is served. Ten softshell turtles are boiled down to fill 20 sake cups, making it a generously rich and delicious dish. It is followed by pufferfish liver in ponzu, grilled eel from Lake Shinji, steamed egg custard with winter shirasu (young sardines) and butterbur, homemade dried mullet roe, bite-size maki rolls, and sake steamed clams. All of the dishes are thanks to Masuda's extensive experiences that also include kappo Japanese cooking.

The preparation of the fish and the vinegared rice featuring an accented sour flavor have both been passed down from his mentor Jiro Ono. While maintaining the same style, three types of vinegar are used instead of just one, making it milder with just a hint of sourness. The sushi rice has a skin temperature, and interestingly, its acidity is perceived differently depending on the ingredients. The boiled soy sauce has evolved into a slightly milder and gentler flavor. Additionally, Masuda has also adopted a unique method of blending the regular rice and the old rice, which is cooked all at once in a broad-rimmed cooking pot. He has firmly established his originality by incorporating the techniques of the famous restaurant. When the nigiri is placed on the plate in front of the guests, it “sinks", because it contains just the right amount of air while the chef holds it together. The sensation of its crumbling in the mouth is superb.

Medium fatty tuna
On this day, the tuna was from Yamaguchi Prefecture, weighing 144 kg. Fatty and aromatic.

Sea urchin
Bafun sea urchin from Nemuro, Hokkaido. Served as a gunkan-style maki with a generous amount on top.

Conger eel
From Tsushima. Boiled to a soft and fluffy finish. Its broth is used for the sauce.

Egg custard
Made with Shiba shrimp and served in place of dessert. It is sweetened with sugar and mirin and cooked for over an hour. 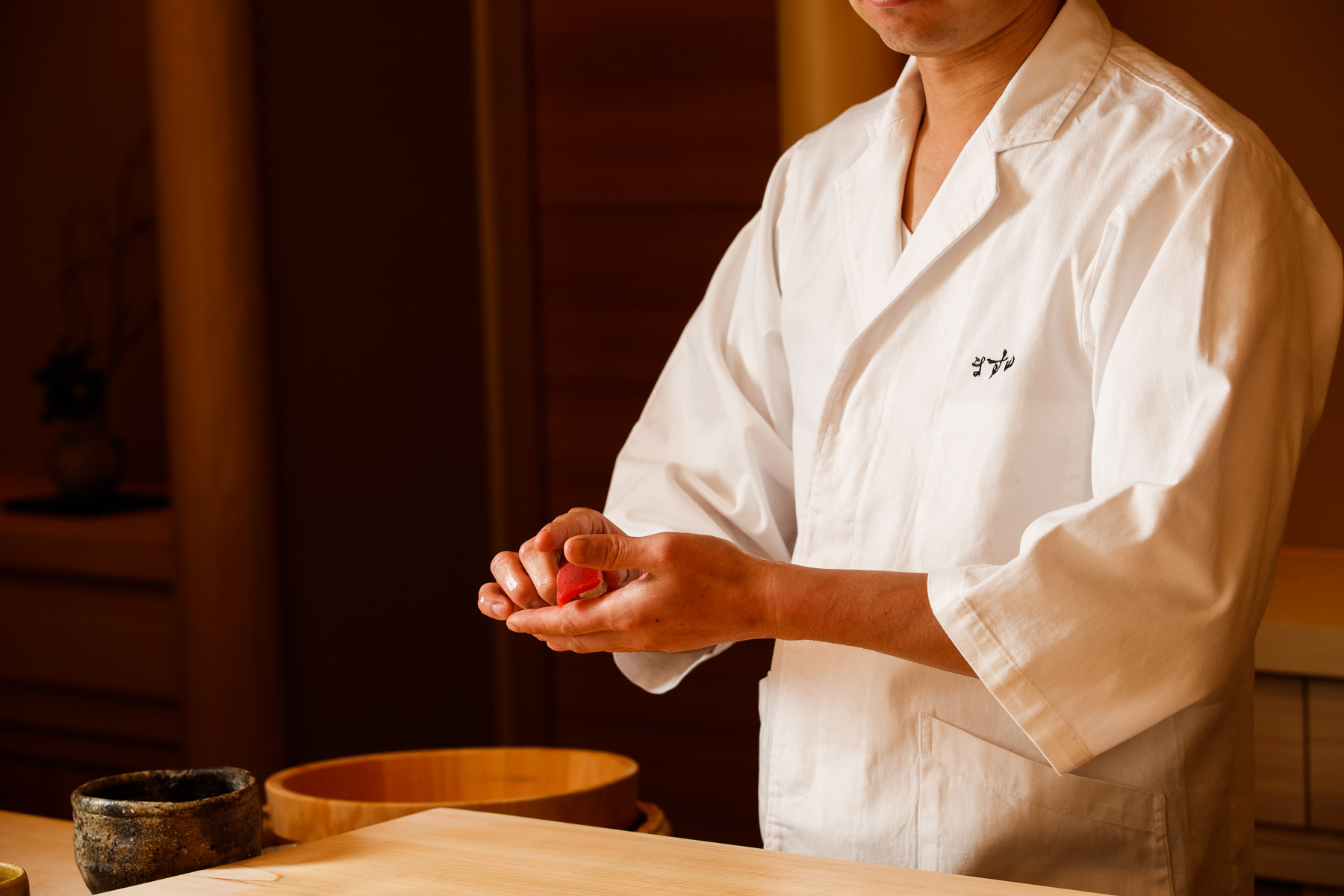 Born in 1980 in Kokura City, Fukuoka Prefecture, Rei Masuda began his apprenticeship when he was 17 as a part-timer at Tenzushi, a famous sushi restaurant in Kokura, Fukuoka. He made the decision as a result of his childhood dream of becoming a sushi chef. After graduating from culinary school, he learned the basics of Japanese cuisine at the kappo restaurant Mansou, in addition to a sushi restaurant.

He then moved to Tokyo and looked for a restaurant to further his training, and after two months of eating his way around Ginza, he was impressed by Sukiyabashi Jiro, which he found to be the most delicious sushi restaurant, and knocked on their door. In a harsh world where many apprentices fail, he honed his skills for nine years, starting with making staff meals and ending up with the secret recipe of the sauce, which Jiro Ono described as having an outstanding flavor. Masuda has learned that it was not good enough to simply imitate the technique, but rather interpret it in his way.

In January 2014, he chose Aoyama as the location of his restaurant because he wanted to respect his master and open in a place other than Ginza, where he trained for many years at Sukiyabashi Jiro. He closed it in September 2019, after which he worked on the opening of new restaurants in Taiwan. On January 29, 2022, he re-opened Sushi Masuda in Aoyama.

Although his days are busy, he never misses a chance to eat out at famous restaurants whenever time permits. He also interacts frequently with top-class chefs.

VISION
He has had a wide range of experiences in Japan and abroad, but for the moment, he intends to focus all of his energy on firmly establishing the new Sushi Masuda. It is indeed the culmination of his career, and he is determined to make it happen.

He would also like to pass on the skills he has cultivated to his apprentices and train them.

He is particular about the sake ware, so that the guests may further enjoy drinking it. The photo shows only a small part of the collection, but he has prepared a large number for the opening. He serves the cups suited to the appearance of each guest, selecting from the sophisticated to ruggedly elegant types in the collection. In addition to the vases for arranging Japanese flowers and art objects, he meticulously picks the small plates for the sliced gingers with the utmost care, ensuring every detail is a delight to the eyes.

The tableware selection is mainly from contemporary artists such as Taro Tabuchi and Takashi Tanimoto, purchased from a specialty store in Kagurazaka.