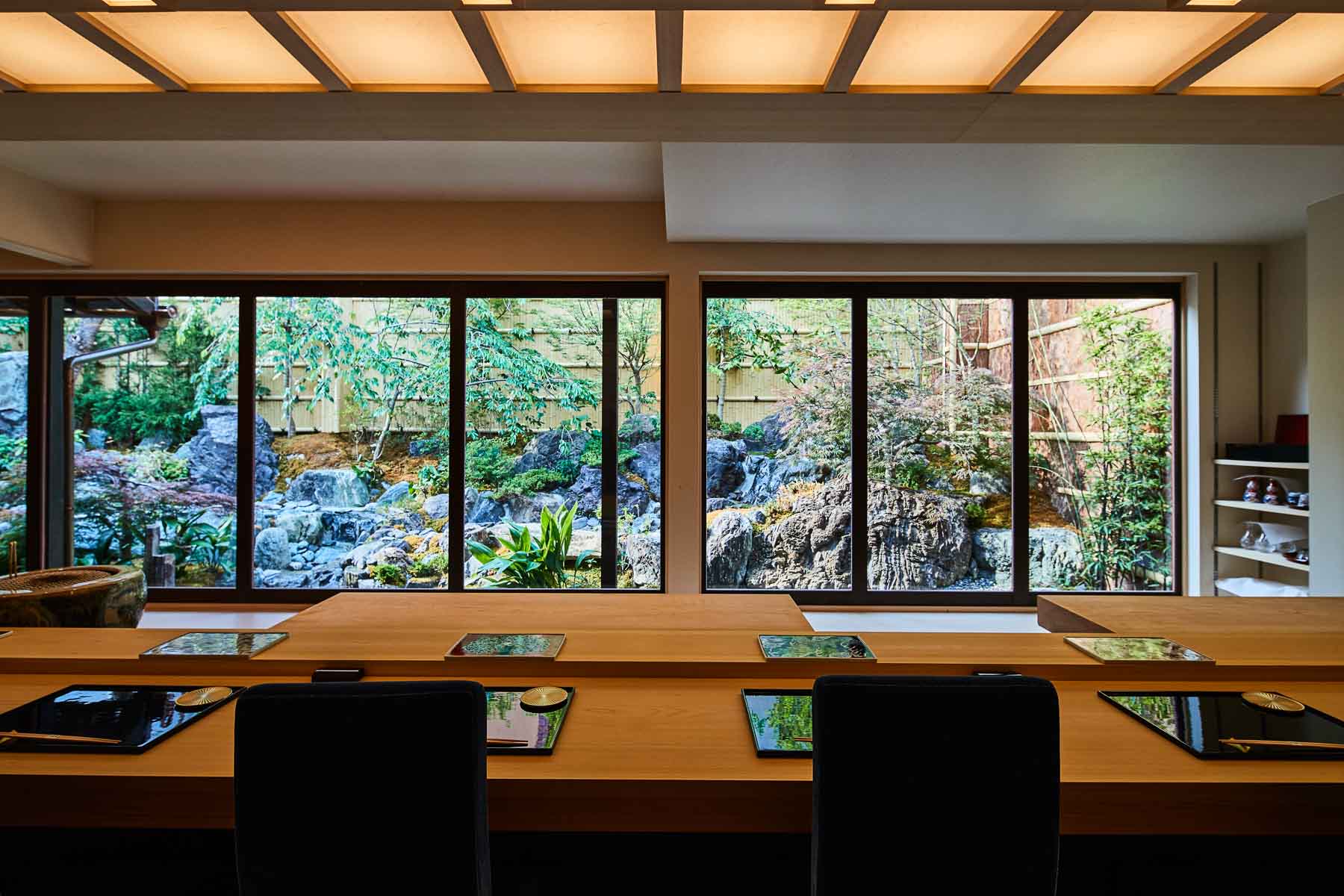 The relocation of the impossible-to-book Osaka-based Sushi Saeki to the grounds of picturesque and culturally important Nanzenji Temple in Kyoto has created a sensation in the sushi world. A stunning garden landscape, expansive luxurious space, and cuisine filled with the fastidious modern touches of a skilled chef – this sushi experience is not to be missed on your visit to the captivating city of Kyoto.

While the charm of many sushi restaurants is the cozy counter setting tucked behind a small hidden doorway, the appeal of Sushi Saeki is in its sweeping gardens and great sense of space. With his status as a skilled sushi craftsman firmly established, Saeki can now claim the magnificent and distinctly Kyoto setting of Nanzenji Temple as the biggest advantage to dining at Sushi Saeki.

Beyond the majestic temple gate to the right is a building, which upon entering you are required to remove your shoes. As you proceed to your left, at the rear you will find a door adorned with Japanese script for ‘Saeki’. The restaurant name is a play on the chef’s surname, replacing the ‘ki’ sound with the cursive character for yorokobu, which means ‘to delight in’. And there is no doubt the restaurant delights many a customer every day.

Having opened as recently as October 2018, the sense of new in the elegant interior is beautifully juxtaposed with the deeply historic building it is situated in. At one of two counters, you feel like you have front-row seats at a stage production, and stealing your eyes immediately is the perfectly manicured garden as the backdrop – you know this culinary experience will be one to treasure forever.

The highly atmospheric garden is landscaped and tended to by Jihei Ogawa, eleventh generation Ueji, the name of a long line of gardeners credited with pioneering the modern Japanese garden. Water gently trickles through the lush setting in which each tree, flower and rock has been meticulously placed according to traditional Japanese aesthetics. A lunch reservation affords diners the view of vivid, fresh greenery; by night, with carefully placed lighting, it turns into a magical, romantic scene. It is an unparalleled breathtakingly beautiful location.

The dinner course is offered at the early time of 5:30 pm and again at 7:30 pm, split across the two counters of nine and ten seats each, both offering magnificent views of the gorgeous garden. Bringing nature inside, the bold, broad counter is made from hinoki Japanese cypress from Gifu Prefecture, and its texture is so delicate, many a guest finds themselves caressing its smooth surface.

Once seated, each guest is greeted by an exquisite Arita ware plate in Old Imari style, hand-crafted by Gen-emon Kiln twenty years ago especially for Chef Saeki. All with different designs of flowers, trees, Mt. Fuji and other motifs that speak of the seasons, it feels like a personal message from the chef, and sets the scene for the course about to begin.

Chef Saeki’s cuisine is based on a foundation of traditional Edomae techniques, but focuses on sushi that appeals to the taste buds of customers today. He aims for cuisine that is simultaneously faithful to its style and “dashing and chic”. The degustation course involves an incredible seven appetizer dishes followed by eight nigiri sushi morsels, and a rolled sushi delicacy called torotaku, combining buttery fatty tuna with the refreshing crunch and flavor of takuan pickled daikon radish.

Kohada gizzard shad from Amakusa in Kumamoto Prefecture is shaped in a flowing style, with curves evocative of the samurai topknot hairstyle. The anago sea eel nigiri is equally beautiful shaped in layered curves. The chef ages his toro tuna ever so slightly to achieve his desired flavor, and akami tuna is marinated just before serving. Nestled between the rice oval and glistening aji horse mackerel is a layer of spring onion shoots and refreshing ginger.

One dish that will delight your palate and stay with you forever is the chef’s signature bowl of sea urchin. Sushi rice in a ceramic bowl is topped with crispy seaweed and then covered with a generous helping of rich, creamy bafun-uni from the east coast of Hokkaido. Equally, the gentle comforting flavor of anago sea eel can be enjoyed to the fullest from a bowlful of rice smothered with the delicious fish and topped with a satisfying reduction of the simmered anago dashi.

INGREDIENTS
Chef Saeki uses only heirloom rice from Shiga Prefecture that is planted in paddies in rows so generously spaced that the ears, full and heavy with rice, are allowed to bow to the ground. Having soaked up plenty of sunshine throughout the growing season, the individual rice grains are large, with a soft exterior and deliciously chewy middle.

Topping this specialty rice is an array of ingredients sourced through routes personally cultivated by Saeki, who says it is crucial to be faithful to your all-important suppliers. Maguro tuna is supplied by wholesaler Ishiji, known to Saeki for more than thirty years. Fished by hand or longline-caught, Saeki prefers tuna of 150 to 180 kilograms, and is confident that the best pieces come to him. Sea urchin varieties like bafun-uni and kitamurasaki-uni are supplied by Kyosui, now at the new Toyosu Market but with whom Saeki has been trading for twelve years. Seaweed is from Ariake – the prized location in Kyushu – and wasabi is the freshest from Shizuoka Prefecture.

Saeki offers a selection of more than ten varieties of champagne and white wines, as well as an astonishing line-up of more than thirty sake brands from around the country. With a chef who knows his flavor profiles so well, it is no surprise that his pairing course is extremely popular among guests. 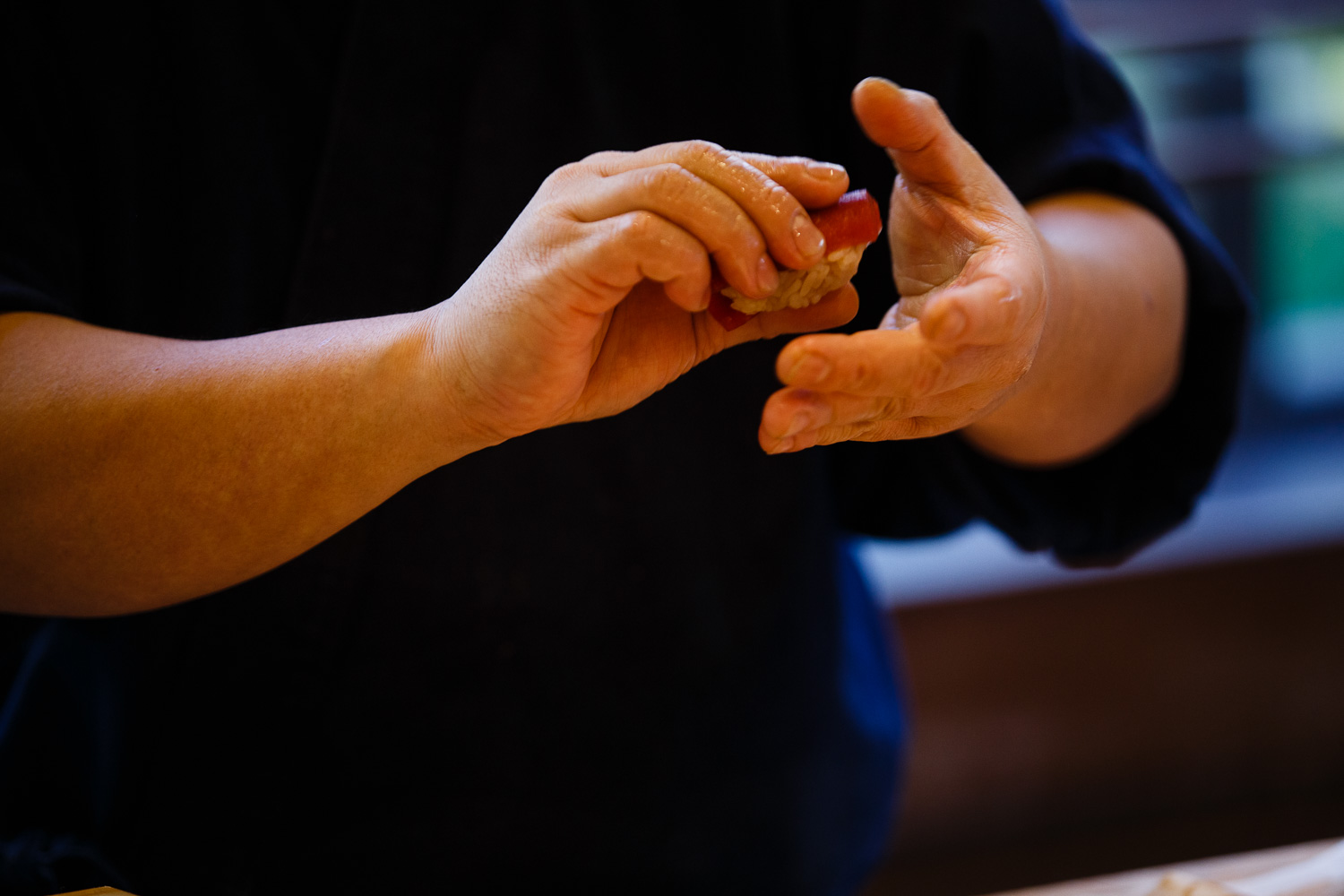 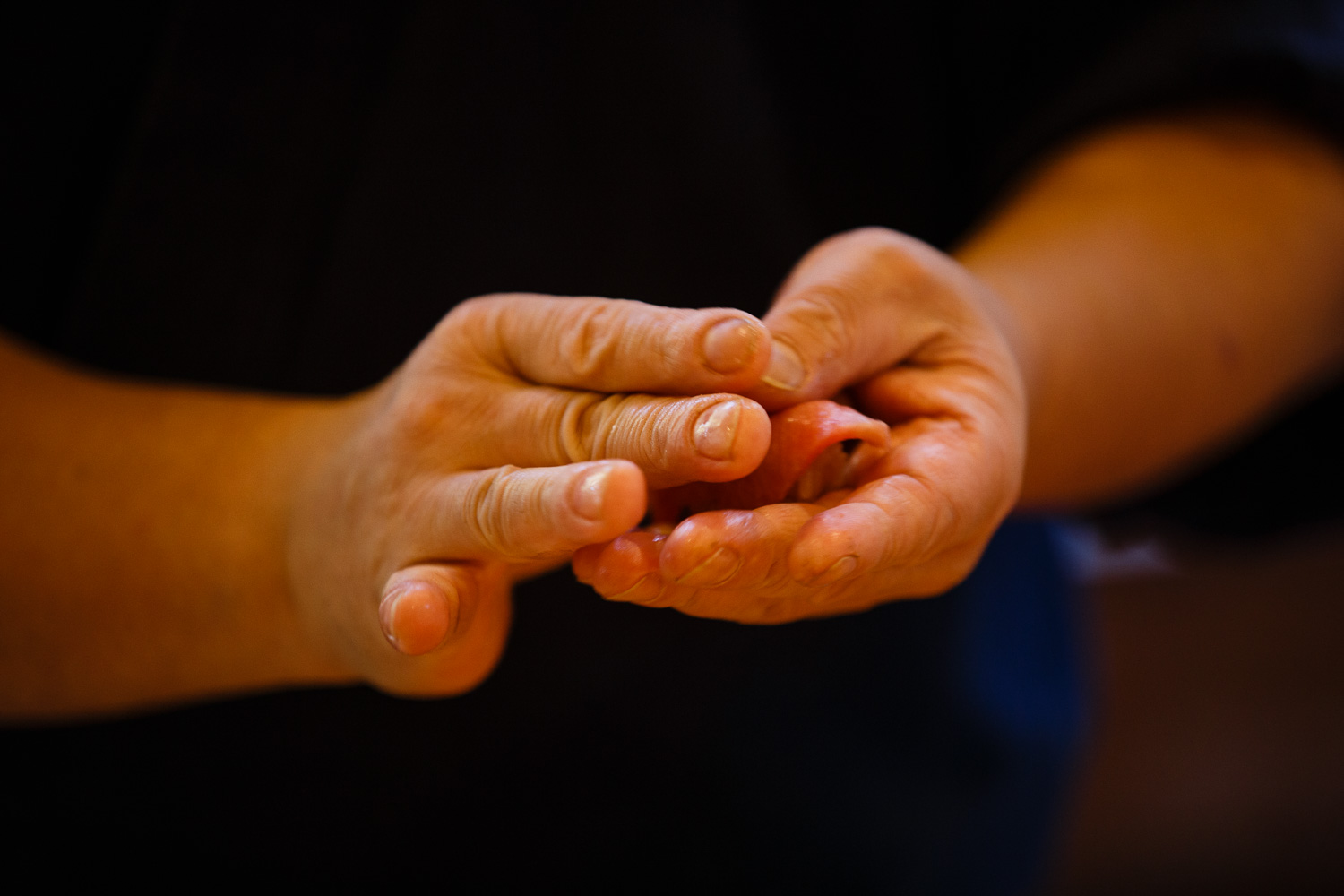 Hiroshi Saeki was born in Osaka in 1971. He launched on the path to become a sushi chef with the idea that being able to make delicious sushi would always ensure him a job, and from early days he was determined to open his own restaurant. After training at Sushi Noguchi in the Kitashinchi area of Osaka, known as the Ginza of the west, Saeki went independent in October 2007 with the opening of his own Sushi Saeki in the same neighborhood. The popularity of the restaurant grew, with many even calling it the best in Osaka, until Saeki closed it in June 2018.

The sense of shock grew even greater when Saeki reopened three months later in Kyoto, within the precinct of the stunning Nanzenji Temple. But much to the delight of guests who had patronized Osaka’s Saeki for many years, in January 2019 the chef launched a custom-made sushi boat that cruises the waters, taking in the evening skyline of the energetic city of Osaka. The first of its kind, the elegant black boat is specially fitted with tatami mats and a stunning untreated timber counter for eight guests. It’s a luxury and incites excitement on a level that helps you understand why Chef Saeki has so many fans.

VISION
Chef Saeki has been busy of late preparing for his grand opening in Ginza in summer 2019. Having established himself in the Kansai region, Saeki is ready to take on the highly competitive Tokyo stage, and vows to keep shaping sushi for at least the next twenty years. The Kyoto restaurant is currently supported by a team of seven, and Saeki plans to train them all to a level allowing them to go out on their own. A skilled sushi craftsman, Saeki also appears to be a tuned-in businessman, with designs in his head for all kinds of businesses related to sushi. Not simply limited to conventional restaurants, listening to him talk about ideas like his ingenious sushi boat cruises heightens expectations for his future forays. Aiming to spread sushi culture unrestrained by tradition, Saeki regularly participates in events, and has set himself the goal of one day serving sushi to the emperor of Japan.

Sushi is seventy percent about the shari rice ovals, according to Chef Saeki, who goes so far as to say that he coaxes the toppings to match his rice. The key is the perfect balance of seasoning between salt and acidity, the latter which he achieves with akazu red vinegar. And at Sushi Saeki, there are no blends, there is just one variety of deeply colored red vinegar, and it is entirely homemade. Resting in a lidded ceramic pot, the vinegar is topped up only after it falls below the halfway line. Allowed to breathe, the vinegar has a very mellow, rounded flavor – the secret to Saeki’s delicious sushi.