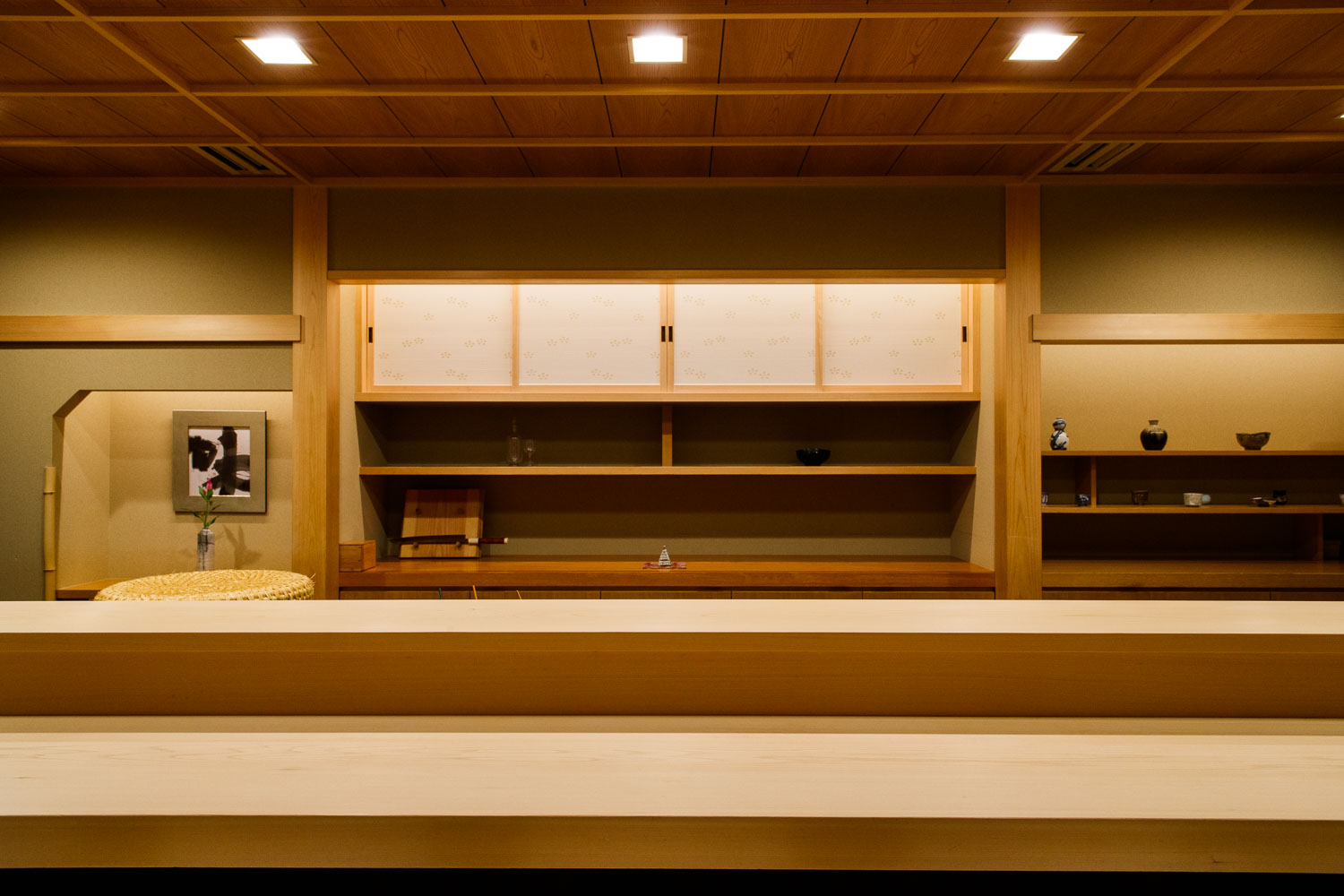 A masterclass in sushi: one moment in this space and you will appreciate why world-renowned chefs bow their heads to the brilliant master. Rather than focusing on procuring expensive ingredients, the chef’s attention is on wielding his traditional Edomae skills to shape the most premium sushi. The sushi is exquisite and must not be missed, and the joy in conversing with Chef Sugita will draw you back time and again.

One of Japan’s preeminent sushi restaurants, Nihonbashi Kakigaracho Sugita is a favorite of chefs and epicureans alike. Steeped in Edo-esque nostalgia, the feel of the town, the restaurant interior, and Sugita’s style all come together in a perfectly authentic way. Walking in a quiet corner of Tokyo’s Nihonbashi district, there appears a signboard announcing the location of “Nihonbashi Kakigaracho Sugita”. Beyond the door lies a staircase and another charming door. Expectation builds as you pass from the high-ceilinged space to the narrow hallway designed specifically by Sugita to whisk you away to another world. As you arrive at the counter, everything opens up again in an instant to reveal an immaculate and elegant space. Already the chef is showing his intentions to guests.

The ambience perfectly captures the essence of Edomae sushi with crisp white-linen covered seats and a nine-seat Yoshino hinoki counter that gently curves allowing every guest to view Sugita’s graceful movements. The private room for groups of three to four is equally exquisite. There’s a comfortable level of tension and a minimalist setting with just a few thoughtfully placed ceramic pieces. The space embodies cleanliness and purity – exactly how a sushiya should be.

Pottery pieces are chosen to express each season, including Chinese zodiac animal images at the new year and special motifs signaling spring – all the works of either Dohei Fujinoki or Kugen Arimoto. The black glossy ceramic platters for nigiri sushi were specially made by Arimoto – a distinctively different style to the lacquerware dishes often found at sushi restaurants.

From suppliers to media, and of course dining guests, everyone is treated to Sugita’s warm hospitality. Please take a front-row seat and let the enjoyment begin.

A masterclass in sushi

Built on a concept of taking fundamental sushi ingredients and serving them as exquisite Edomae sushi morsels, the only course at Sugita includes five to eight appetizer dishes followed by eleven to twelve nigiri pieces. It begins with seasonal vegetables like simply boiled edamame or steamed potatoes, followed by a duo of sashimi varieties, and then seafood ingredients served raw, steamed or boiled depending on the day and the season. Then comes the ever-popular signature dish: a seaweed-wrapped norimaki sushi roll filled with mackerel, pickled ginger and fresh green shiso leaves.

Warm dishes follow, such as flame-grilled fluke, simmered octopus or savory egg custard. Next is an array of delicacies, such as steamed Chiba Prefecture abalone sliced impossibly thin like prosciutto, increasing the rich aroma and the surface area in contact with the tongue. Another particular favorite is monkfish liver from Yoichi, Hokkaido – salty and sweet with a luscious smooth texture. It is always served with an Aramasa Shuzo kijoshu called Hinotori; with its equally luscious flavor, it is like a dessert wine. Sugita has been serving this combination ever since the sake was released more than 10 years ago.

Once the grilled fish is served, Sugita checks in with guests to see if they would like more sake and appetizers or if they are ready to proceed to nigiri. Sugita’s attention in nigiri-making is on creating a unified bite. Take iwashi sardines, for example. When shaped with a whole piece, the fatty fish overwhelms the vinegared rice, but the whole experience changes and balance is restored when the sardine is sliced and layered. Adding a dab of paste – a mix of ginger and chopped chives – just watching Sugita with his agile movements and gentle handiwork is a feast for the eyes.

The nigiri course takes you on a journey from the clean flavors of Saga Prefecture kohada gizzard shad (or the very young shinko form if available), white-fleshed fish such as tai sea bream, straw-smoked sawara Japanese Spanish mackerel, and on to baby snapper. Caught in Shitsukari, Aomori Prefecture, the akami maguro back flesh is served marinated to highlight the rich umami and perfect acidity. Ibaraki Prefecture kasugodai that had been gently vinegared is then covered with kombu for precisely three and a half hours before being served with Kure yaki-shio salt. You may also be treated to simmered hamaguri clams, kuruma prawns, alfonsino or black bluefish, and irresistible uni sea urchin. Kyushu-grown Taima anago conger eel or the bonafide Edomae variety from Tokyo Bay is served steamed, simmered and finished to aromatic perfection. The incredible course comes to a close with the sumptuous flavors of rolled omelet and savory miso soup.

INGREDIENTS
Chef Sugita says the most impressive sushi restaurants are those that make you ask how the same seafood varieties used at restaurants all over Japan can taste so different there. He is a frequent visitor to Toyosu market, sourcing his seafood from six or seven favorite suppliers. Personal relationships with fishermen and fishmongers at regional markets also allow him to source premium akauni sea urchin from Kyushu, as well as herring roe and other sea urchin varieties from Hokkaido. The rice at Sugita is Koshihikari komai, previous harvest rice, currently from Niigata. He steams it to a level that makes for plump rice morsels, flavors it with red and white vinegar at a ratio of seven to three and then accents the flavors with majima wasabi from Gotemba. The chef’s simmered down sauces brushed for a final touch of flavor are made from Higeta soy sauce with sake and mirin. He adds tamari soy sauce to those brushed on shiny silver-skinned fish.

Sugita has selected just one variety of champagne, but 30 varieties for his delicious sake lineup, focusing on flavors that lend themselves to his cuisine: light, refreshing sake for sashimi and nigiri; some with perfect acidity to accent appetizer dishes; and slightly sweet kijoshu sake to pair with fish roe. 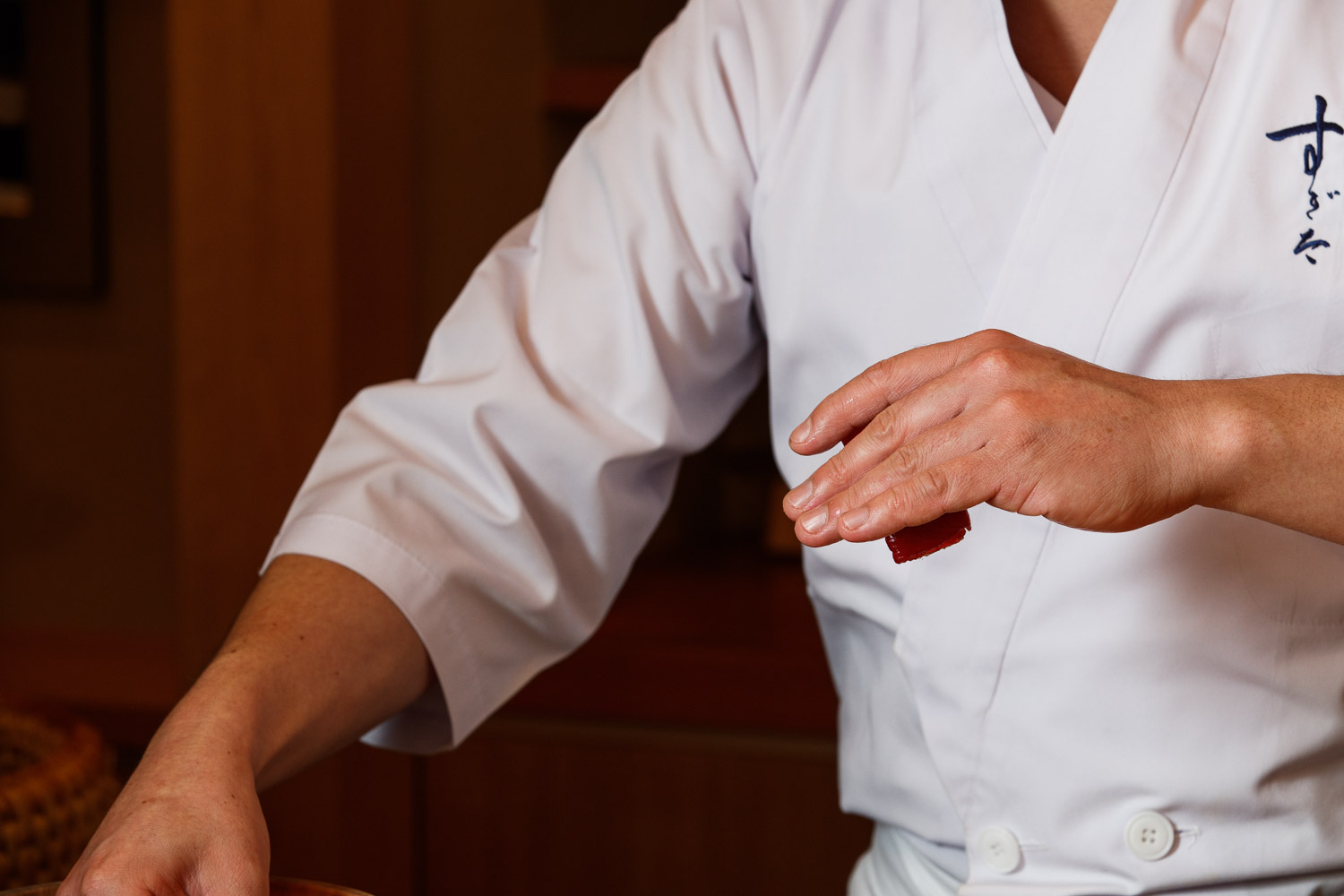 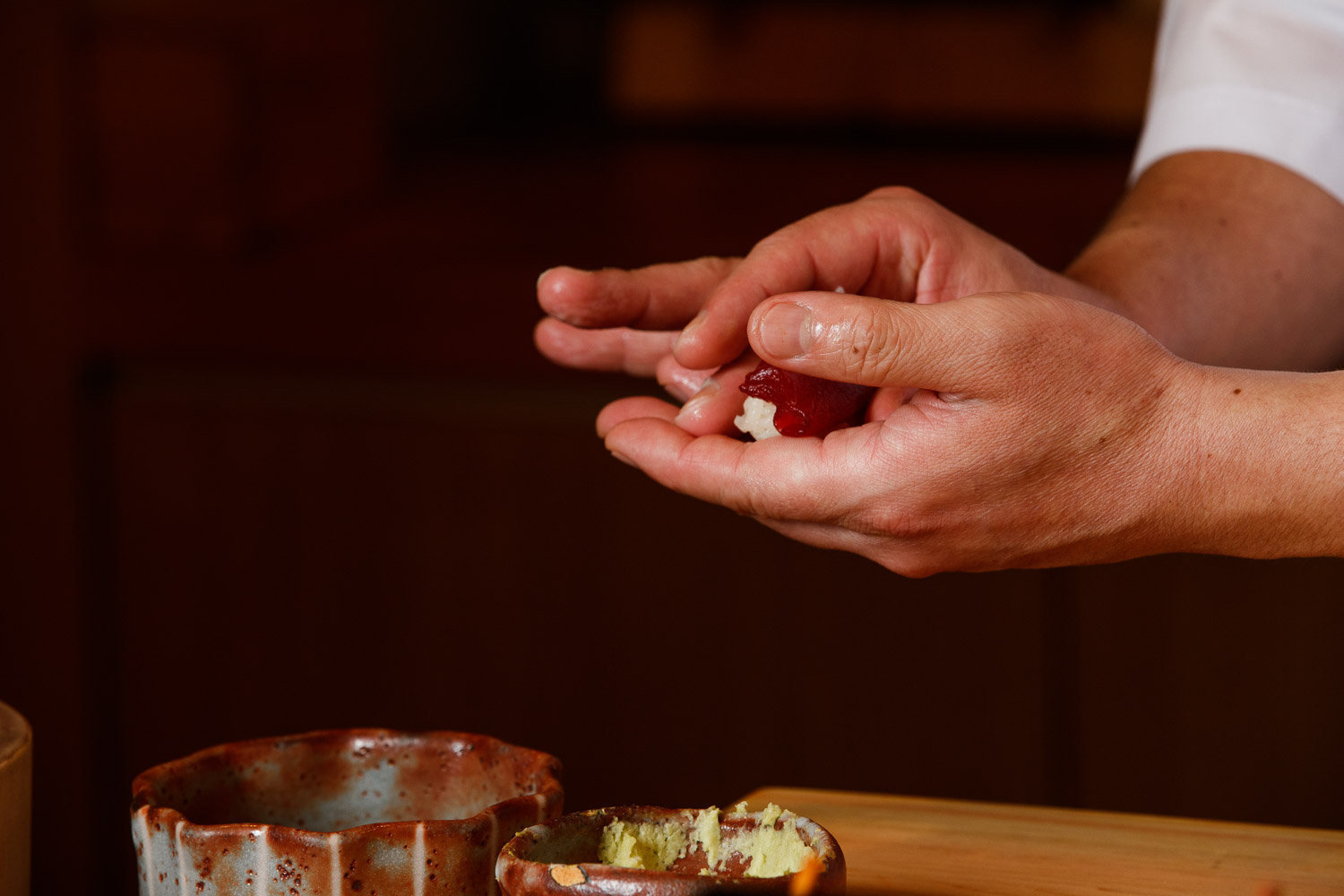 Takaaki Sugita was born in 1973 in Chiba Prefecture. His journey into the culinary world began when he got hooked on a television drama about an apprentice sushi chef on Japan’s national broadcaster NHK. His determination grew and during high school he started working part-time at a sushi restaurant, filling the vacancy left by his friend’s departure. He recalls really loving the service aspect of the work.

His first interview for a sushi apprenticeship was at Nihonbashi’s Miyakozushi. He got the job and spent the next 12 years there polishing his knife skills and learning the world of sushi inside-out. He never contemplated leaving because he adored his very kind master. Then at age 30 came the offer of a lifetime – to take over a branch of his master’s restaurant formerly run by a superior. He had just three days over the new year to make a decision, and thus began Nihonbashi Tachibanacho Miyakozushi. It was a bumpy start but Sugita was determined to make it a success. Ten years later he moved the restaurant to its present location – the former home of Sugita’s wife’s family restaurant business. Not designed as a sushi restaurant space, Sugita felt there were so many memories that should be preserved, thus it was totally rebuilt and reopened as Nihonbashi Kakigaracho Sugita. Just two years later it was awarded a Michelin star.

His success must be attributed to a combination of meticulous skills and warm personality. Sugita speaks with a beautiful rich voice like that of a rakugoka traditional storyteller. It creates this truly enjoyable, warm atmosphere that is undoubtedly the key to his very large list of regular customers.

VISION
Sugita says he has no specific goals or timelines; rather he chooses to value that which is right before his eyes and live for each moment, each day. He is dedicated to constantly improving his quality from yesterday to today and on to tomorrow. His utmost priority is offering attentive hospitality to his guests. Sugita is also extremely supportive of and hopeful for his apprentices as they go independent, opening their own restaurants, including the always busy Sushi Hashimoto in Shintomicho and Bangkok’s Sushi Ichizu.

Sugita’s greatest treasure is his team of young, unique staff members. Despite coming from different backgrounds, they all have lofty goals and dreams of going out on their own. They include the son of Hakata favorite Sushi Takao, a former Ritz-Carlton Kyoto chef, another who embarked on this career aged 34, and yet another who cold-called the restaurant asking for a job after seeing Sugita’s incredible craftsmanship on the internet. It couldn’t be a more varied team. Sugita tells them all to set their sights high and constantly broaden their perspectives as a way to raise the bar, forever exceeding guest expectations. His greatest goal is that they should all find happiness, and you can see this feeling is deeply mutual. Even in his strictness there is kindness, and his love clearly shines through.