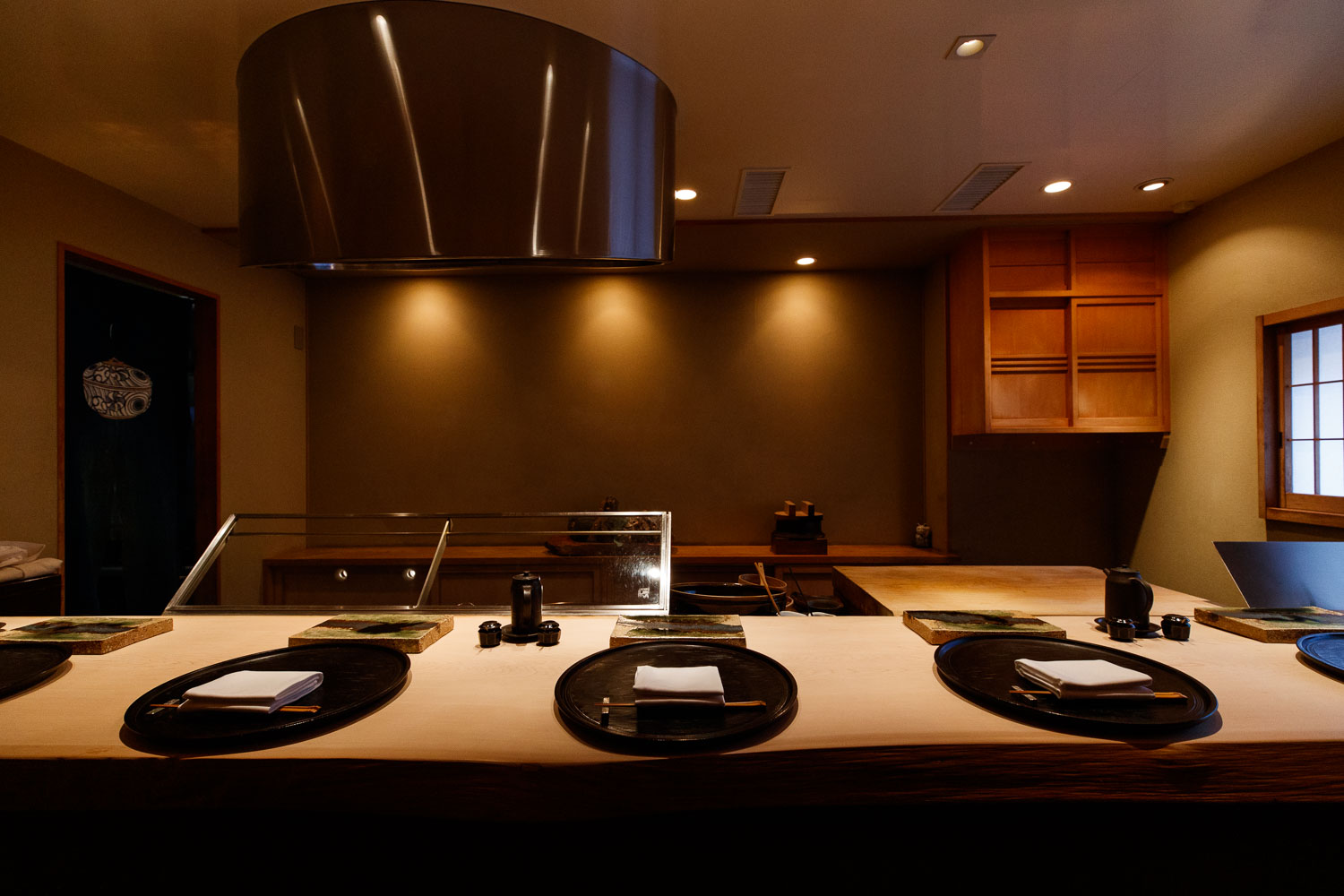 Driven by a deep love for Shizuoka, Itamaetempura Naruse is absolutely worth a trip off the beaten track. From the produce to the passion and sheer culinary talent, each seemingly simple dish will mark your memory with outstanding impact.

Jump aboard a shinkansen bound for Shizuoka and alight an hour later to make your way to Itamaetempura Naruse in a quiet residential neighborhood. Guided by the elegant calligraphy signboard and clean white stucco walls, pass through a wooden door into a waiting space. Beyond awaits a counter for just seven lucky guests – an exquisite single plank counter made from 360-year-old Hida hinoki cypress from deep in the pristine mountains of Takayama, Gifu Prefecture.

Once seated, behold the exquisite Negoro-nuri lacquerware trays by Mishima, Shizuoka-based artisan Tatsuo Okura, and chopsticks individually hand-carved from Japanese timber bamboo by Kyoto craftsmen. These are just some of the touches that show the chef’s keen aesthetic and attention to detail. A glass shield ensures guests have an unobstructed view of the chef’s hands at work without fear of oil spitting as he fries up all kinds of incredible creations.

Guests leave singing with joy at the delectable cuisine at Naruse, one of Japan’s premier tempura establishments, run by a chef who pours his unwavering love for the local produce and passion for the art of tempura into every bite. It’s simply incredible how much flavor emerges from each dish. There’s a strong sense that the experience here is like no other, from the deep knowledge of where every ingredient comes from to the chef’s authentic kindhearted manner, you’ll want to savor everything in this perfect moment. And you’ll experience for yourself why seasoned gourmands make their way here time and again.

Perfectly timed deep-frying is of course essential to delicious tempura, but Chef Shimura takes it a step further and times even the delivery of produce, making a point of gathering the ingredients just in time for each sitting. It goes without saying that the menu changes daily based on seasonal availability, but even the lunch and dinner menus differ based on which ingredients arrive when. From where you sit looking beyond the fryer, the freshness of the vegetables, sitting colorfully and dirt-covered in a charming timber box, is palpable.

Tempura restaurants often start with a prawn dish, but at Naruse there is no set pattern – Chef Shimura takes his inspiration from all the elements of the day. It may be a morsel of fish like largehead hairtail or vegetables like green bean shoots or ginkgo nuts. Led by the produce, guests’ preferences, or sparks of genius leading to new menu items on the fly, the sense of freedom and artistic flair are all part of this restaurant’s appeal.

Shimura’s signature tentsuyu dipping sauce has been brewing constantly for 13 years. It contains kombu, bonito, Sugii Shuzo Asukayama pure-rice mirin, and Sakae Shoyu soy sauce. His simple tempura batter is a mixture of flour, eggs and water. Multiple iterations of sifting incorporate plenty of air in the batter resulting in a delectably light texture. Once mixed, the batter is stored at a staggering minus 52 degrees. Shimura fries in a blend of oils based on Taihaku sesame oil, made by pressing unroasted sesame seeds. It has very little fragrance but plenty of umami and has the power to draw out the best in the base ingredient. He loves his shiny copper frying pot for how it holds its temperature and allows for gentle heating through.

In Shimura’s words, deep-frying has the ability to extract the vitality of each ingredient. He determines readiness through sound, aroma and even vibrations – signs of a true artisan. The battering technique and frying time and style differ for different seafood varieties based on freshness and preparation. He vows to handle the ingredients as little as possible before frying to ensure guests can savor the true innate and fresh flavors: live seafood is broken down right before guests’ eyes and vegetables are not peeled until immediately before use.

The chef’s omakase course includes sashimi, up to 15 pieces of tempura, a rice dish and sweets. It may begin with skin-on Shizuoka longtooth grouper that has been cooked in 50-degree oil until lusciously gelatinous and served with a soy-based sauce and Bali salt. Tachiuo largehead hairtail fish is oil-rich and fried to plump perfection wrapped in a shiso leaf and served with tempura dipping sauce filled with grated daikon. The course may meander into vegetable dishes before returning to seafood. Broccoli is sliced for frying, resulting in a juicy texture and full broccoli flavor; the warmth and rich sweetness of local Asahata Renkon lotus root can only be savored between October and February. A rare non-Shizuoka ingredient, Hokkaido pumpkin is used for its incredible flavor like sweet potato, fried low and slow. Amadai tilefish is a delight of contrasting textures with puffed flesh and battered skin side cooked at low heat until deliciously crispy. After applying a gentle brush of a soy-based sauce for added aroma, Chef Shimura cuts open the tempura sawara Japanese Spanish mackerel to reveal a beautiful interior of plump flesh that melts in the mouth. Some just-prepared dishes like the incredibly succulent gnomefish are handed directly to guests wrapped in paper, enhancing communication between guest and chef.

INGREDIENTS
Shizuoka is blessed with Suruga Bay, one of Japan’s most thriving fishing grounds, and flourishing agriculture thanks to a temperate climate. Chef Shimura takes only the highest quality ingredients from the vast selection available and works them into tempura magic for his guests. The ingredients are selected by the chef himself or in direct cooperation with producers who have worked tirelessly over many years to gather the best items available.

Indispensable to Naruse’s success is Naoki Maeda of Sasue Maeda Sakanadana – a fishmonger sought out by many chefs who Shimura met around the year 2000. Maeda is said to have patronized Naruse three to four times a week when it first opened, wishing to check that his own handling and delivery of ingredients bound for Naruse had been appropriate. Supporting his deep insight and wealth of experience are methods employed to showcase to the fullest the potential of Suruga Bay seafood. Going well beyond consideration for delivery timing and other such common factors, Maeda’s surprising techniques include very careful placement of fish in boxes to reduce their stress during shipment.

Vegetables are mostly native species grown at partner farms, in many cases harvested personally by Naruse staff. They include Asahata Renkon – a native lotus root variety narrower than typical types and longer with up to four sections, and with a fibrous texture like elegant silk strings. The potato-like sweetness and crunchy texture are features said to have made this vegetable a favorite of shogun Tokugawa Ieyasu. A deep pond is required to cultivate Asahata Renkon and it takes close to one hour to harvest just one by hand. Every year the number of farmers engaged in its cultivation decrease making this an increasingly rare treat.

Other vegetables include young bamboo shoots just ten centimeters long grown on a steep mountainside, carrots grown in the foothills of Mt. Fuji, and a thick burdock root species cultivated in volcanic soil. Early season onions are pulled from the soil in the early morning by Chef Shimura himself, and it’s stories like these you hear as you partake in these precious ingredients that make the experience even more special. Another reason for going to the trouble of using such ingredients, even though they pose challenges in some cases, says Shimura, is to ensure the local species are still around for future generations.

Naruse staff visit markets, producing districts and farms not only to secure produce but also for information-gathering. They have fascinating conversations about sea and weather conditions and often get back to the restaurant just in time for the lunch opening time. Shimura says with unwavering confidence that good ingredients, when deep-fried, expand to plump perfection. 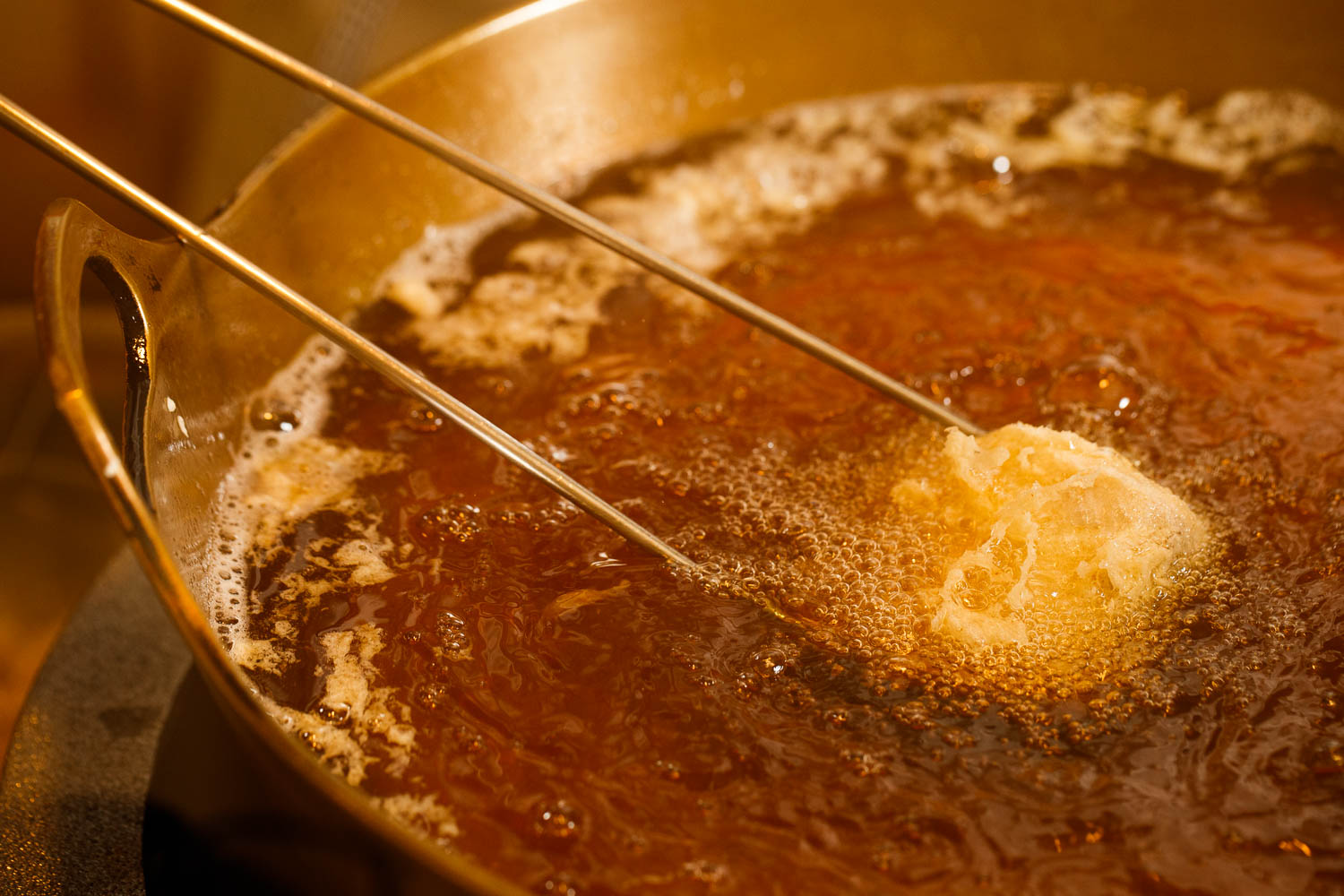 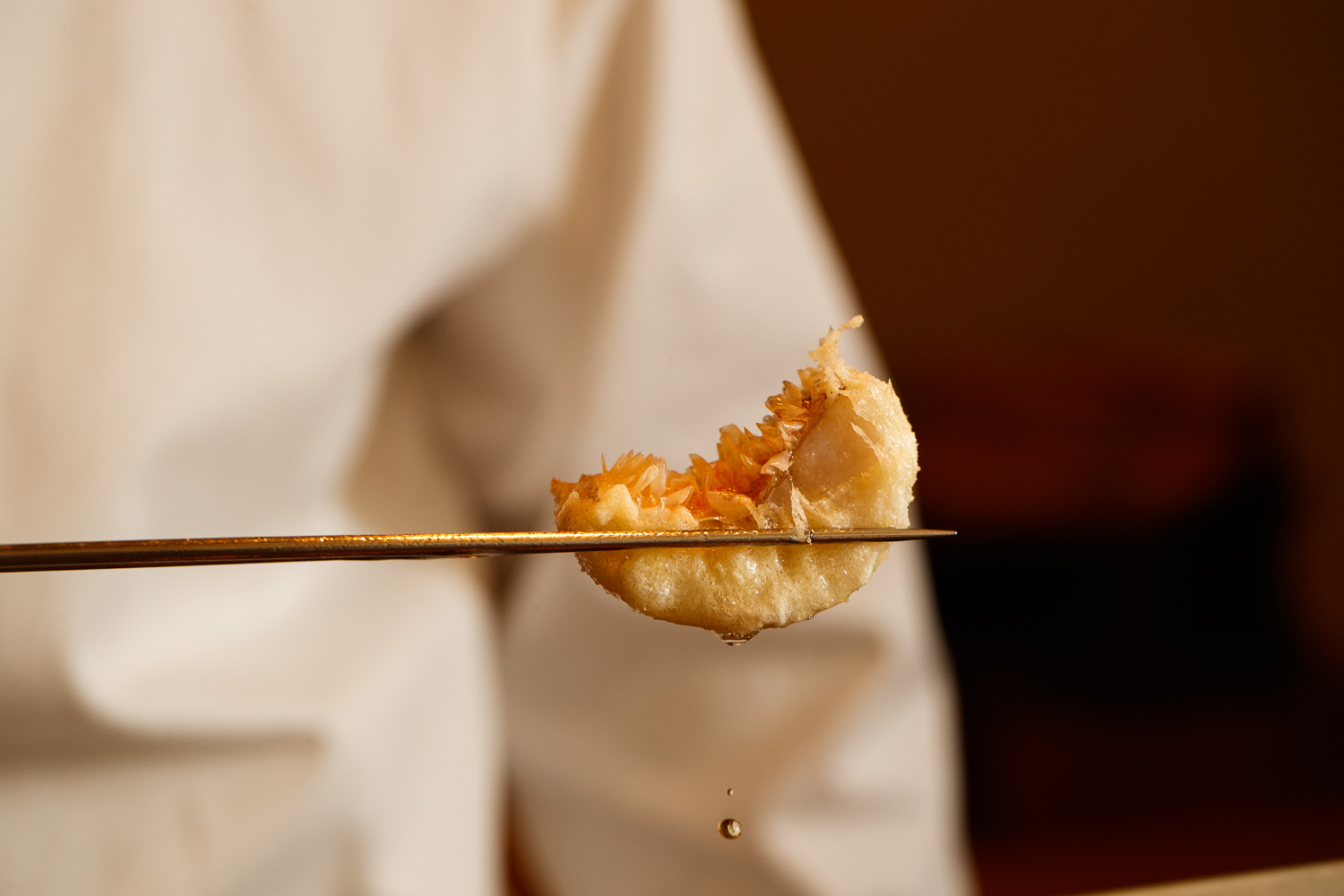 Takeo Shimura was born in Kawasaki City, Kanagawa Prefecture, in 1975. After graduating from a Tokyo high school, he attended the Tokyo University of Agriculture studying Japanese agriculture with a major in animal husbandry. Shimura spent a little under two years studying abroad in Australia upon graduation from university, drawn by a desire to surf ever since he took up the hobby in high school. An introduction from an older university alumnus led to work at a restaurant of Japanese cuisine in Sydney.

Shimura returned to Japan to obtain his culinary license before joining Shizuoka kappo restaurant Yaizu Tachikichi. Initially planning to spend just one year there, Chef Shimura found himself enamored of the cuisine and stayed more than six years. During training, the opportunity to take charge of the restaurant’s tatami mat seated tempura space turned out to be life changing. He was awakened to the depth tempura has to offer and the incredible flavor of Shizuoka produce.

In September 2007, Shimura opened his very own tempura specialty restaurant – Itamaetempura Naruse. He visits producers every day, selecting the best ingredients he can find, trusting his own eyes, ears and hands. Propelled by the mission to secure ingredients in the best possible condition, Shimura approaches his work with utmost care every day, seeking ever greater heights in the world of tempura. He is married to a Shizuoka native.

VISION
2020 promises to be an exciting year for Naruse with a planned move to a pond-viewing garden near Shizuoka’s Sengen Shrine. A Saga-ryu style landscape garden built by Ota Dokan, a samurai famed for building Edo Castle in the 15th century. The restaurant’s new location will be within a splendid expansive garden, and while the building itself will be larger, there will still be just eight seats. The new building has an adjoining tea room and it is there that rice will be cooked in pots heated by firewood. Chef Shimura’s dream is for guests to come from far and wide to discover the wonders of Shizuoka Prefecture. And the other wish always on his mind is to raise apprentices so they may become independent chefs, three of whom have already achieved that goal.

The female sommelier highly recommends a pairing course of Japanese wines, the soft umami of which she feels pairs beautifully with mild-flavored homegrown ingredients. Each is chosen for its affinity with Chef Shimura’s tempura and the selection includes around twelve varieties of wine mostly from Nagano, Hokkaido’s Takizawa Winery, Yamanashi’s Chateau Jun and world-renowned Grace Wine. The wine list also includes other carefully selected libations such as champagne, and the sake collection, like the produce, is a reflection of Shizuoka with Suginishiki, Kikuyoi and Hakuin Masamune products available.