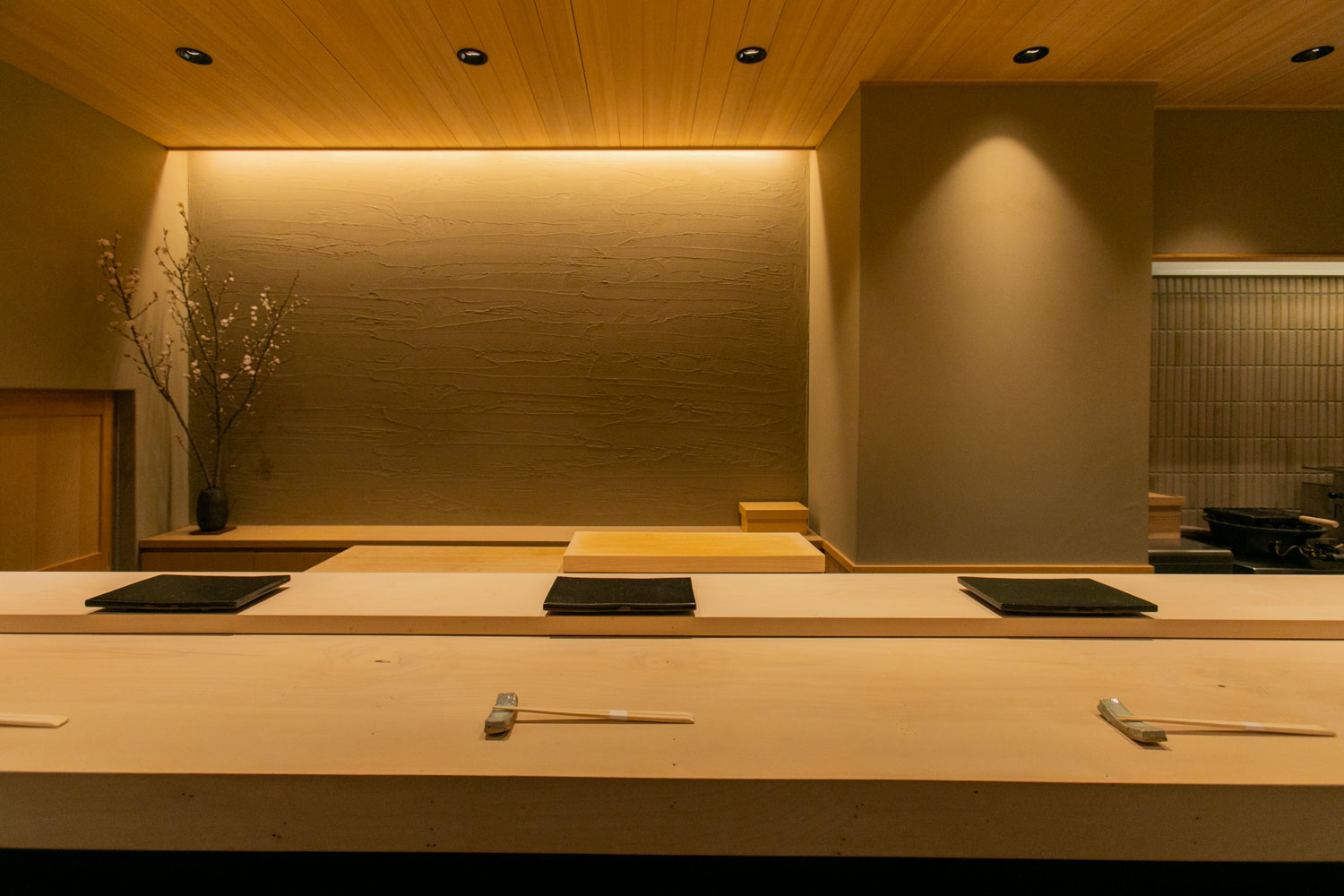 The restaurant is run by Keita Tsutsui, who has the unusual background of being entirely self-taught in sushi techniques. His seriousness and dedication to sushi are on another level, and he relocated from Kochi to Hakata with his family in order to open his own place. His motto is “sushi restaurants should be places to eat sushi”. He wants his customers to purely enjoy sushi, which his omakase menu demonstrates by mostly consisting of nigiri.

Sushi Gosuian opened in October 2017, a three-minute walk from Ohori-kouen Park. The restaurant has a great location in a serene residential area. The streamlined interior reminds you of tea ceremony room, without excess, unnecessary decorations. The counter is made by a single piece of gingko wood and has just six well-spaced seats. The high chairs with large seats furthermore promote a relaxing and comfortable dining experience. This is a place where you can concentrate on the sushi itself.

The name Gosuian was borrowed from Gosuido, a Japanese calligraphy tool shop run by his grandfather in Kokura, Fukuoka. His grandfather wanted him to take over the shop, but he chose the food industry instead. Using part of the shop’s name for his restaurant was a way for him to compensate for not taking on the family business. Tsutsui later learned that his grandfather’s calligraphy pseudonym was in fact Gosuian. This was a complete coincidence, but a very happy one.

His wife is works as the okami, hostess, in the restaurant and creates the flower arrangements. The style of the restaurant’s space is understated, but a little touch of seasonality like early cherry blossoms adds a beautiful Japanese aesthetic. The Karatsu ware and Imari ware used as serving dishes and sake cups also add elegance.

Taking advantages of the sea near Kyushu

The omakase menu starts with chawan-mushi, steamed savory custard in a cup. It’s no surprise that this dish is excellent due to Chef Tsutsui’s time spent training in a Japanese fine dining restaurant. After several variety of sashimi is served, the Edomae-style nigiri course follows with nigiri pieces of white-fleshed fish, and progresses to squid and tuna. He doesn’t choose to “age” his tuna; instead, he values its freshness. Fresh chu-toro is uniquely cut to drape generously over the shari, or sushi rice, to achieve perfection on the palate.

He serves kohada from Amakusa, Kumamoto, as a mid-course to accentuate the flow. Later on, hamaguri clam adds a different flavor profile that is both sweet and savory. You may have sayori, aji horse mackerel, shrimp, and akagai arc shell as well, depending on the season. The rice portions are relatively small and take his guests’ sake enjoyment into consideration. Worthy of a special mention, his gari, pickled ginger, is outstandingly fresh and crunchy.

For more insight into what Chef may serve in the latter courses, seared shirako of tora-fugu followed by sea urchin, smoked Spanish mackerel, a hand roll, and anago eel. If you have any space left in your stomach at this point, he will serve kanpyo rolls before finishing with a dessert made by his wife.

The lunch omakase menu consists of an appetizer, 10 sushi courses, and dessert. The diner omakase menu is comprised of two appetizers, 15 sushi courses, and dessert. If a guest is a tuna lover, he sometimes serves two pieces at once. He thinks tuna is the highlight of the sushi courses. He also serves tuna as a roll, with marinated chu-toro to make a “zuke”, which is famously known as the signature roll of Sushi Gosuian. “When excellent tuna, sushi rice, and nori meet in the perfect balance, it’s remarkable,” he says.

INGREDIENTS
He prefers to use seasonal fish and seafood caught in the sea near Kyushu peninsula, because Hakata City is blessed with many varieties of fish and seafood and he wants to highlight this area the most. Tuna may be the only exception, which is always flown in from Ishiji in the Toyosu Market in Tokyo.

He orders rice from a special rice shop that was selected by one of the top “rice sommeliers” in Japan. His rice is a blend of Koshihikari from Amagawa in Saga prefecture, Yumeshizuku from Saga prefecture, and Sasanishiki from Miyagi prefecture. When he found this rice shop in Fukuoka, he made sure that he could open his own restaurant in this area.

His seasoned vinegar for sushi is a blend of three kinds, all from Iio Jozo Brewery in Kyoto, famous for brewing their vinegars from rice grown on their own farm without pesticides. He uses Kinari soy sauce by blending koikuchi type and usukuchi type, both brewed by Mitsuru Soy Sauce in Itoshima City, Fukuoka.

For nori, he uses crisp sheets made with the first harvest of the season, gathered and made in Yanagawa, the southern part of Fukuoka prefecture. When putting it over the frame, it releases toasty, irresistible aroma and crisps perfectly. The wasabi comes from Taracho in Saga. Dried bonito flakes from Kagoshima are free of bloodlines and make clear, clean-tasting stocks. The kombu is from Rausu, Hokkaido. 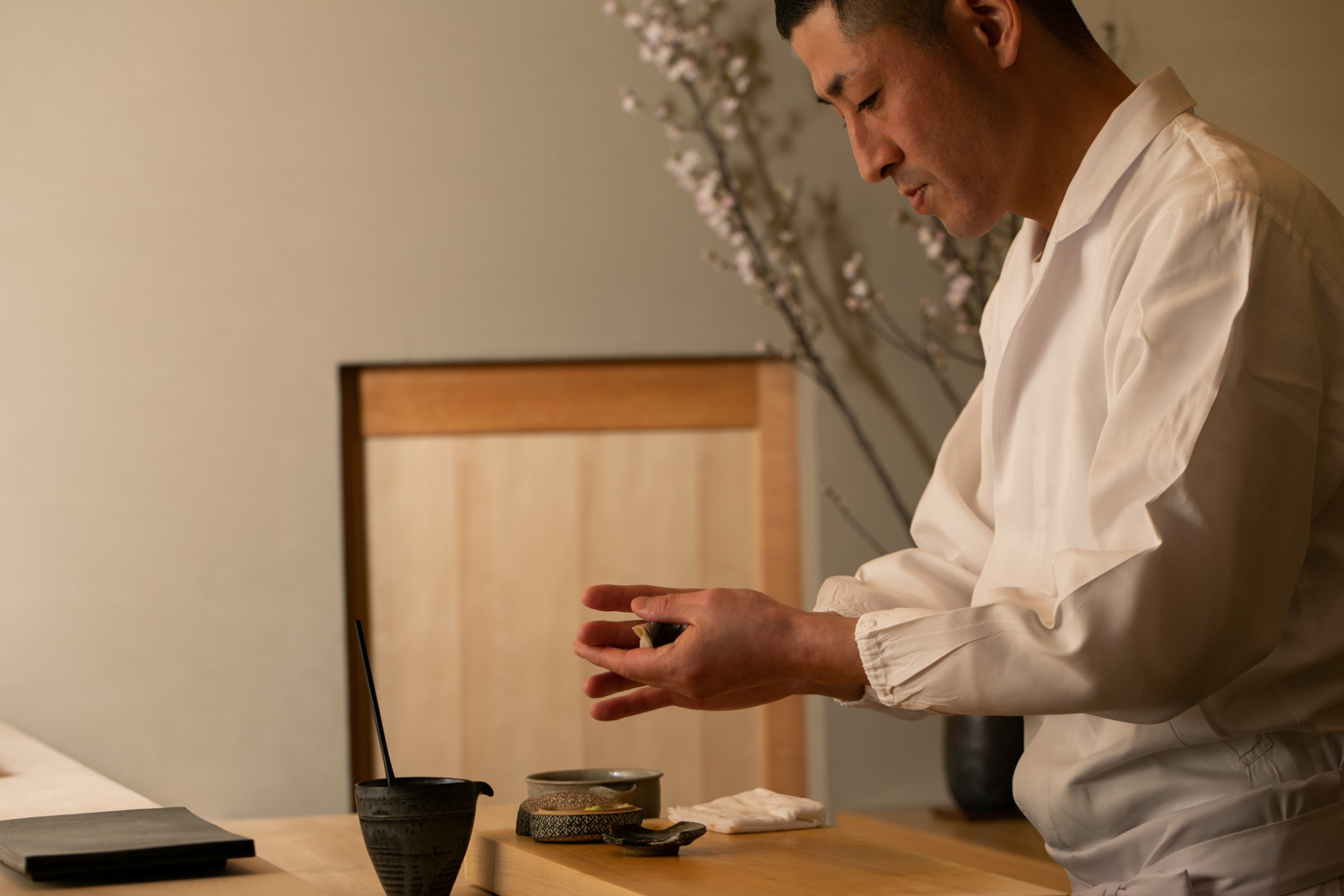 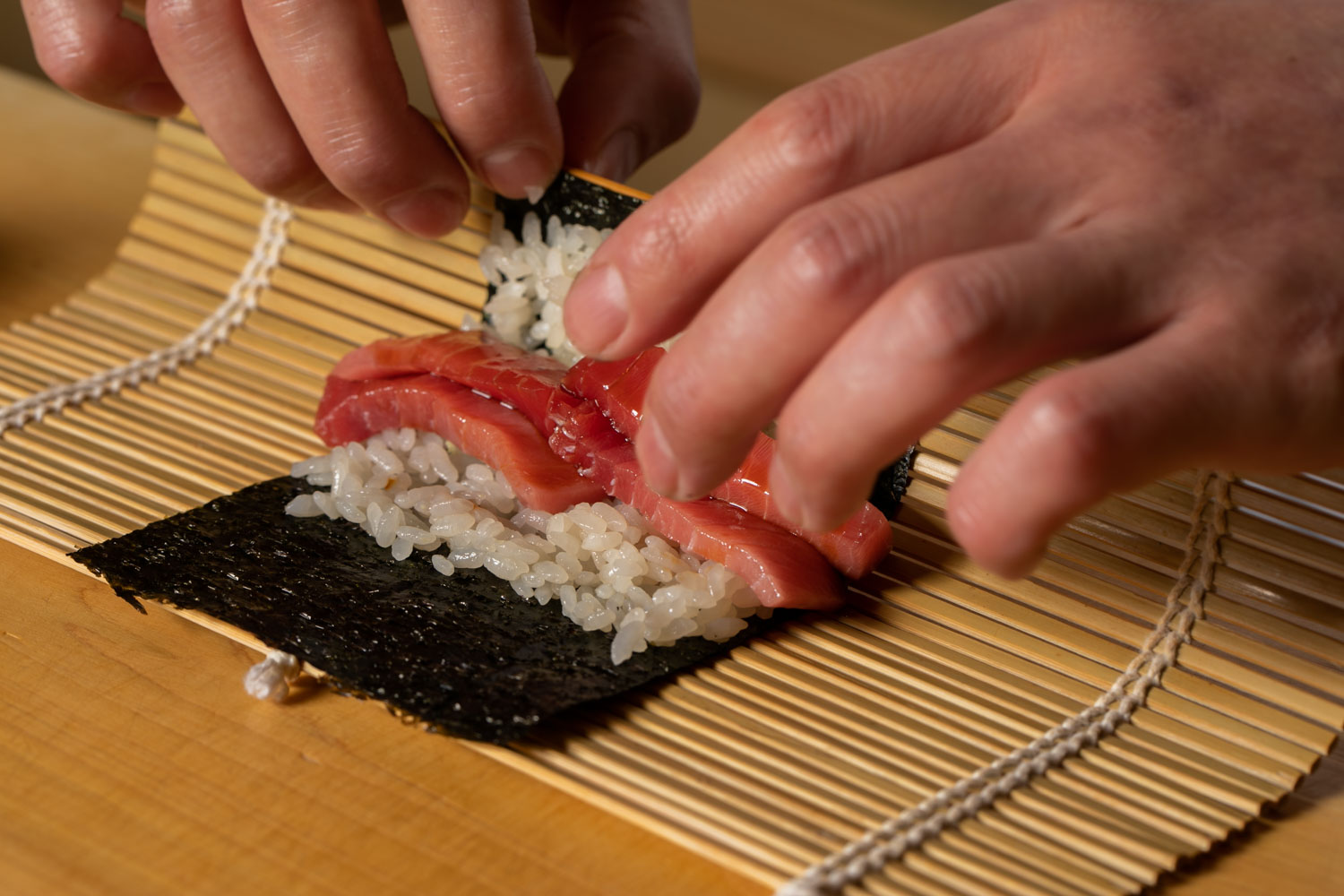 Tsutsui was born in Kitakyushu City, Fukuoka prefecture in 1979 and majored in Marine Resources at university. He did not particularly find satisfaction in his studies, but instead found enjoyment in cooking for friends and began to consider pursuing this as an occupation. After training and working for approximately eight years in a Japanese restaurant in Kochi, he opened his own Japanese restaurant when he was 31 years old.

He began to gravitate towards sushi, so while continuing to work he studied sushi in his free time before moving to Hakata in 2017 to open Sushi Gosuian. The advantage of being self-taught is that “your experience consists of all of your own trials and errors, and that’s what makes it your own,” he says.

He has been married to his wife for 20 years, and they have three children. They all are still young, but he is happy that his second daughter helps at the restaurant after school and is interested in the restaurant in future.

VISION
He wants Sushi Gosuian to grow beyond its current position as a local foodie destination and hopes to attract guests from all over Japan and even overseas. He aspires to deliver the skills, technique, and food culture that have made Japanese cuisine so revered. He also wants to deepen his level of hospitality as it relates to the tea ceremony.

His wife was a pastry chef at an Italian restaurant. Because of her experience, she is able to make daily cakes for Sushi Gosuian that recall traditional yokan bean jelly cakes, like matcha-chocolate cake, azuki cheesecake, yuzu white chocolate cake, or houjicha soufflé cheesecake. Since cheese is a fermented food, her cakes complement both sushi and sake, making a great marriage. The dessert is served in a beautiful Japanese lacquered square box.

For tea, they boil water using Nanbu-tekki, or an iron pot. During boiling, the iron component makes the water milder tasting and makes the local teas such as hojicha or Yame green tea taste even better. These little indulgences after the meal make the sushi omakase experience even more impressive.