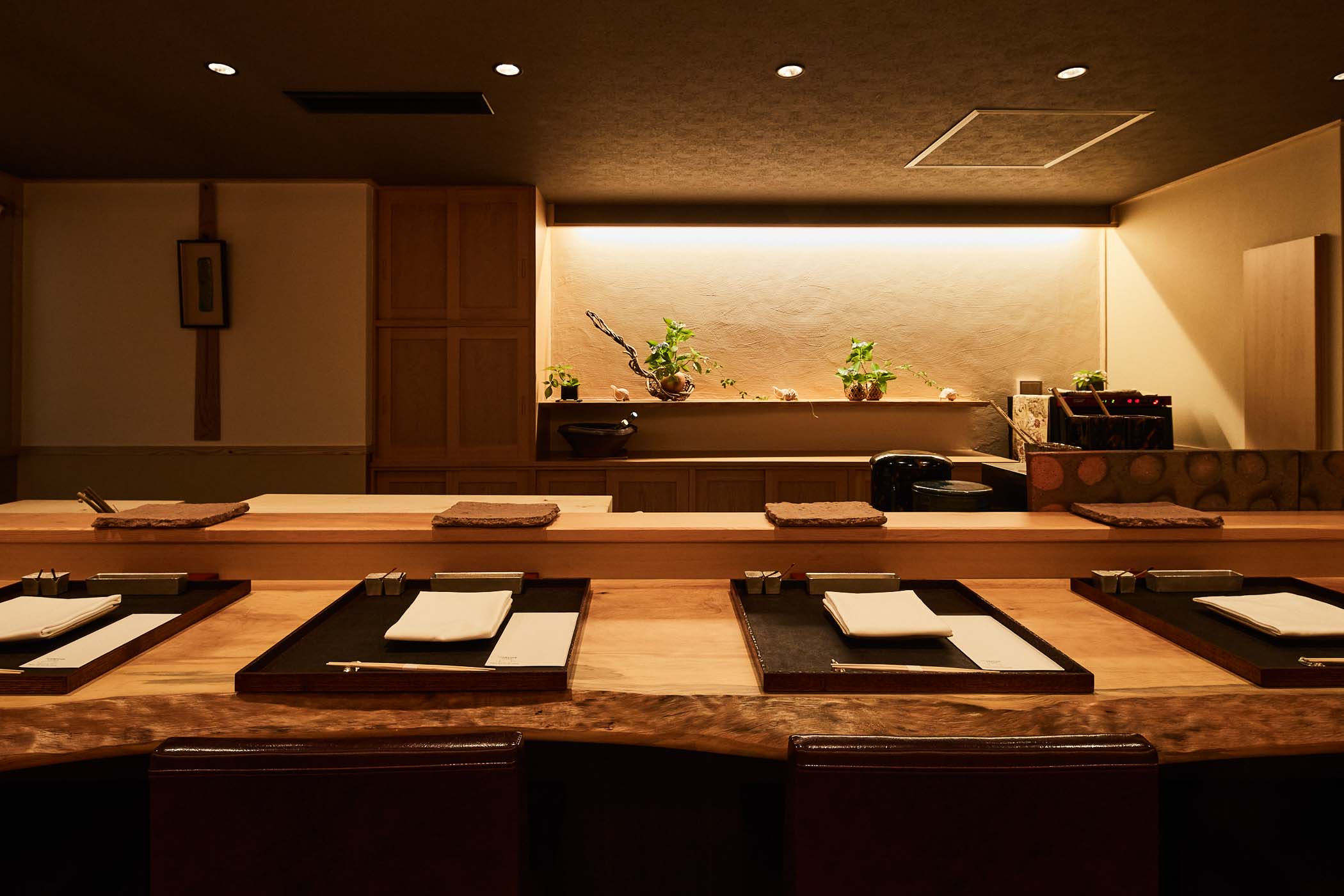 A secluded yakitori restaurant that mirrors the touches of fine Japanese dining, Ebisu Torihiro offers an elevated yakitori experience that begins in an elegant waiting space. Whether you are guided to the beautiful cherry wood counter or whisked away to the spacious private room, the mouthwatering aromas and flavors of sizzling chicken and an array of seasonal dishes are guaranteed to satiate.

In April 2022, the originally members-only restaurant Yakitori Torihiro reopened in a new location in Ebisu, in the heart of Tokyo, now welcoming both existing fans and first-time guests. In an upscale space, the chef delights guests with a wonderfully moderated course featuring Omi Jidori from Shiga and Suigo Akadori from Chiba, using fresh or aged meat to suit each dish.

A paper lantern with the restaurant’s phoenix logo is the only marker for the stairs leading down to this hideaway just a five-minute walk from busy Ebisu Station. Incense wafts gently in the air as you open the door into the elegant space. Now with heightened expectations for the experience ahead, the delicious food aromas will tease you during even the briefest stay in the waiting space.

The impressive cherry timber counter is the centerpiece in a calming wooden interior accented by a seasonal Japanese flower display. The elegant Japanese touches extend into the kimono-clad service staff and each guest’s tray replete with matching tin chopstick rests, condiment dishes and holders for used skewers. The charcoal grill area is surrounded by eye-catching Bizen-yaki pottery.

The counter offers a front seat for all the action in the kitchen, but some guests may also enjoy the seclusion of a private room with enough space for six away from the eyes of other guests.

Ebisu Torihiro is the place to enjoy yakitori in a delectable course of seasonal dishes. The chicken dishes contain two varieties of Japanese chicken either aged in an aging booster machine or served at the height of freshness, having been slaughtered that day and broken down by the chef himself. Both are exquisitely cooked over Kishu binchotan – said to be the highest quality hard charcoal in the world.

After two or three seasonal appetizers with chargrilled elements, the chef serves ten skewers of all kinds of mouthwatering yakitori, from chicken tenderloin, breast and thigh meat to precious innards, complemented by three to four vegetable varieties. The chef’s soy sauce-based yakitori sauce is not overly sweet and formulated to bring out the best flavors in the base ingredients. Each sauce-flavored skewer of deliciousness is dipped into a magic pot filled with the sauce three times: before, during, and after cooking. And some ingredients are allowed to shine with only a touch of salt to adorn them. After all, it is all about the produce and the skill of the chef.

A traditional Japanese meal typically ends with a rice dish, and for his closing dishes Chef Kaneda uses a Nanbu Tekki cast iron pot to steam the rice to perfection. You will first be treated to the just-cooked plump white rice with rich minerality brought out by the high cooking temperature. This will be followed by a bowl of rice with toppings, such as sumptuous, minced chicken, but if you are too full you are welcome to take it home.

Even if you could not finish the rice, you will probably have room for purin – the rich, custardy Japanese pudding dessert. In a nod to the Japanese tradition of finishing a meal with a digestif, Chef Kaneda serves his purin with a small glass of sake to pour over before devouring your final dish of the evening.

INGREDIENTS
Chicken is by far the most important ingredient, and Chef Kaneda is an enormous fan of the two main varieties he serves because of their full flavors and delicious aromas. One such variety is Omi Jidori from Shiga Prefecture, which arrives within twenty-four hours of slaughter, and another is Suigo Akadori, which arrives whole from Chiba Prefecture. The flesh of this latter variety has depth and the perfect elasticity, according to Kaneda. There are no absolutes for how Kaneda prepares and ages the various parts of each chicken; he follows his instincts with each new item and each new day.

Seasonal vegetables are shipped direct to the restaurant from producers around Japan. The rice is a blend of two cultivars specially prepared by a rice Meister, guaranteed to taste wonderful be it freshly steamed, served as a donburi, or taken home to enjoy. The signature dessert of velvety custard pudding is made with eggs from the town of Iwasaki, in Hasuda, Saitama, where they are laid by free-range poultry at an old-fashioned poultry farm. 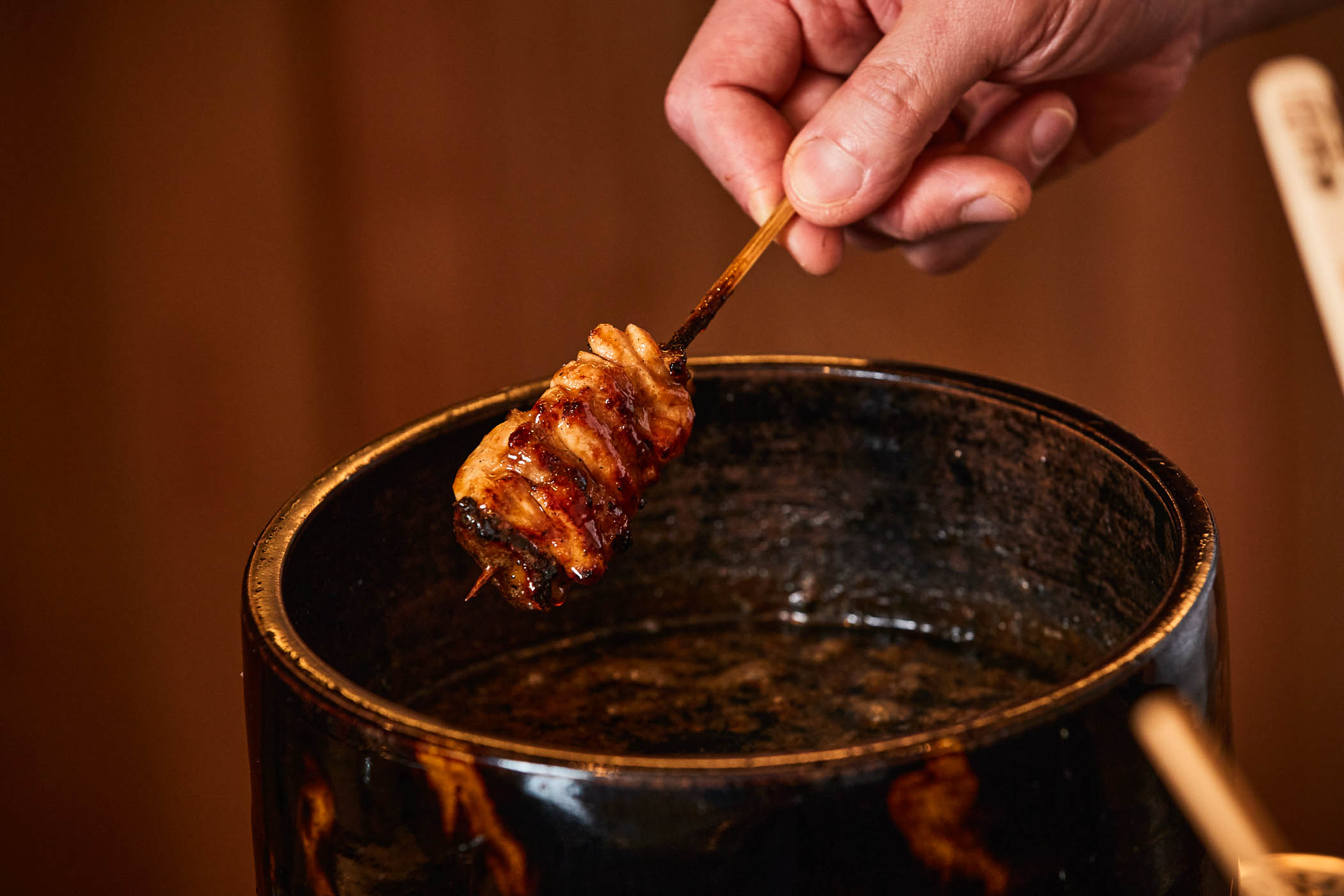 Born in Saitama Prefecture in 1983, Chef Kaneda was a dedicated judoka from elementary school right through to university, to which he attributes his perseverance. He worked for a construction-related company for three years, but around the age of 25 he began to ponder starting his own business and launched himself on the path to chefdom. He began with two-and-a-half years of training at a Tokyo Italian restaurant. Fully aware of his somewhat late start as a chef, Kaneda searched for a genre that still had scope for new players and plenty of potential, thus he settled on high-end yakitori. After five years of training at Torisei, in Omiya, Saitama Prefecture, Kaneda went independent in the same city in 2017 with Yakitori Torihiro. His dream of someday opening an eatery in Tokyo came true with the establishment of Ebisu Torihiro in April 2022 – a yakitori restaurant like no other, with a waiting space and all kinds of carefully planned high-end touches.

In his free time, Chef Kaneda enjoys exploring the sights and foods of different places, making a point of visiting different eatery styles and cuisines to gain inspiration for his own.

VISION
As the journey has only just begun, the initial goal is having a full house every day. And to that end, the chef’s singular focus is on continuously raising his quality.

Ebisu Torihiro has a selection of five or six well-balanced sake varieties and an array of wines and champagnes that pair beautifully with yakitori. The collection includes highly sought-after brands such as Juyondai from Takagi Shuzo brewery in Yamagata Prefecture and Senkin from Tochigi Prefecture, and wines with a distinct French focus.

For 2-6 people. Kids are welcome at private room.
MIN GUESTS