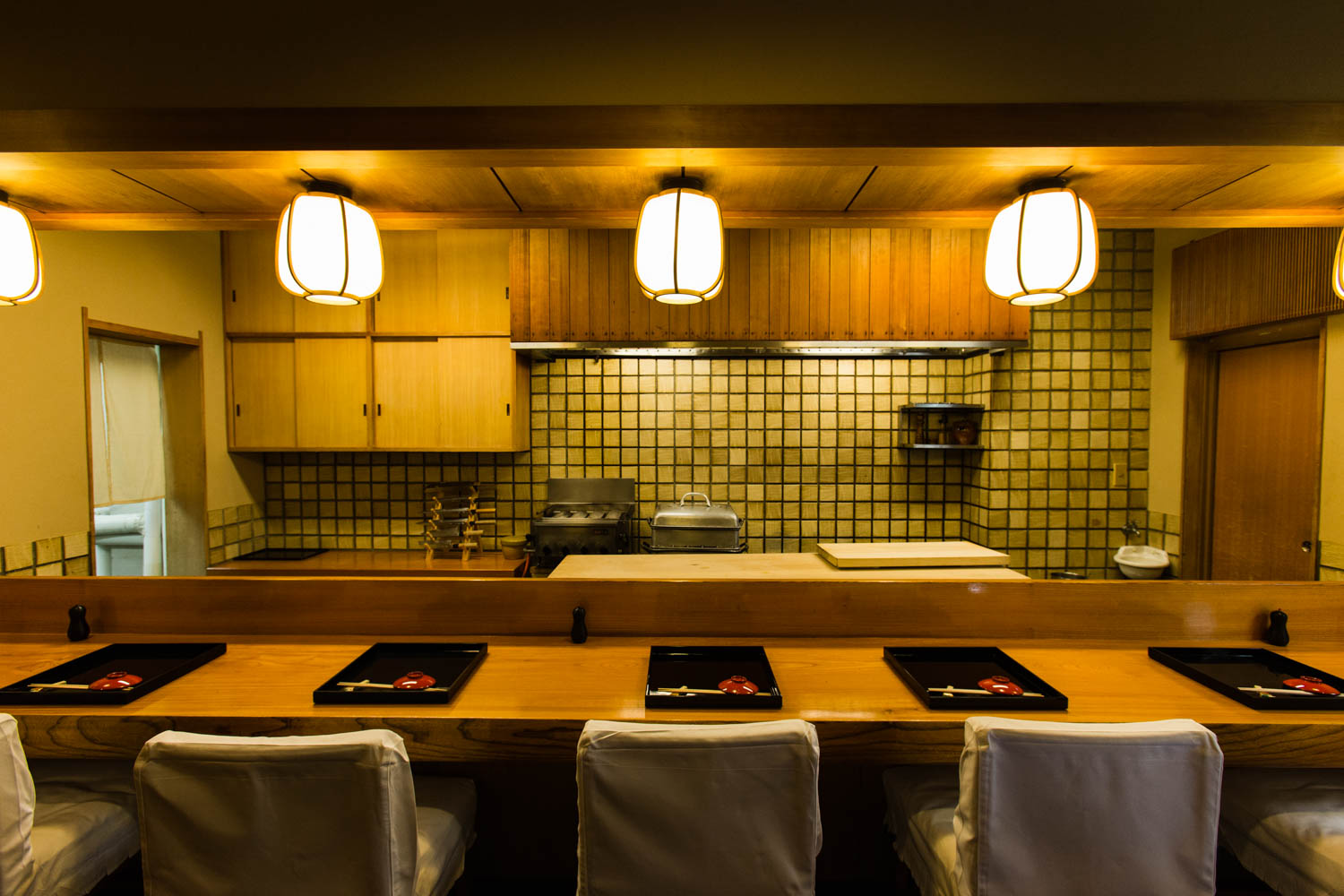 Far from Tokyo in Kanazawa is an English-speaking celebrity chef who draws famous chefs from around the world to taste his two-star Michelin cuisine and engage in fascinating conversation. Your imagination flows as you stroll the streets of the charming former samurai town to Zeniya to enjoy the highly personalized Japanese cuisine of second generation Chef Takagi.

In a romantic neighborhood of central Kanazawa lined with cobblestone streets and dotted with old samurai houses, the gentle trickle of a water well and a delicate bamboo ladle invite you to purify your hands and heart. Entering the intimate restaurant, there is a sense of nostalgia in this space that has not changed since the chef’s father and first owner opened it in 1970.

It is difficult to choose between the lovely traditional setting of a private room and the lively conversation at the counter. In the hinoki counter dining area, creamy green square tiles decorate the wall, amid cupboards and doors in different timber tones. It is minimal to the extreme; only knives lay in their rack ready to start service. The spacious private rooms beckon you to sweep your feet across the tatami mats and take a seat on a comfortable cushion. Thin strips of bamboo shade the windows and draw your focus to the greenery and stone lantern in the garden outside. Your eyes move around to view the austere beauty of artwork, calligraphy, and ikebana. Wherever you are seated, you will find a lacquerware tray with chopsticks and small lacquerware dish, the latter a vessel for a traditional welcome drink of sake that signals the start of the meal.

Zeniya offers Japanese cuisine, influenced by the local Kanazawa cuisine known as Kaga Ryori. But there is no menu. The chef goes to the markets daily and creates a menu around the seasonal ingredients that inspire him. Courses are brought together through discussions with staff and an understanding of guests’ preferences and experiences, and even their feelings on the day, to adapt and create the perfect menu for each person and each moment. Infused throughout with touches and tastes of the season, dinner follows the pattern of a traditional kaiseki course meal, including about ten dishes.

A sakizuke dish comes first, a kind of amuse bouche with elements that set the tone of seasonality that will be carried throughout the meal. In summer, velvety handmade goma-dofu or sesame tofu is topped with a lavish amount of uni sitting on a lotus leaf and adorned with lotus flowers. Resting on a glass pedestal, charcoal-grilled Noto-gyu beef is showcased with salted green gingko nuts, only found for a very short season in summer. With no other garnishes or sauces, the presentation draws the guest into the pure beef flavors and the seasonality of green gingko nuts.

The signature dish, first created by the chef’s father and served ever since, is abalone steak. Lovingly prepared in meticulous steps, the abalone is steamed, simmered and grilled before being presented ever so simply on a vibrant daisy dish, which highlights this beautiful ingredient. While the traditional Japanese influence is clear and Zeniya has focused on seasonal local ingredients since opening, there has always been innovative flair thanks to the chef’s father who liked to include unconventional items like balsamic vinegar and caviar, somehow seamlessly weaving them into his cuisine. This knack has been inherited by the son, Chef Shinichiro Takagi. The underlying concept is that cuisine is intended to nourish both the body and soul, and Shinichiro strongly believes that the positive effect of the joy of food in that moment has an immeasurable impact on our well-being.

INGREDIENTS
Given the menu is entirely determined by ingredients found at the market each day, proximity to the incredibly well-supplied central market in Kanazawa is key. Picking up the best of local seasonal ingredients ensures a strong Hokuriku focus, added to by produce from further afield, secured through direct requests to producers throughout Japan. These very close partnerships span decades, and the length and breadth of Japan. 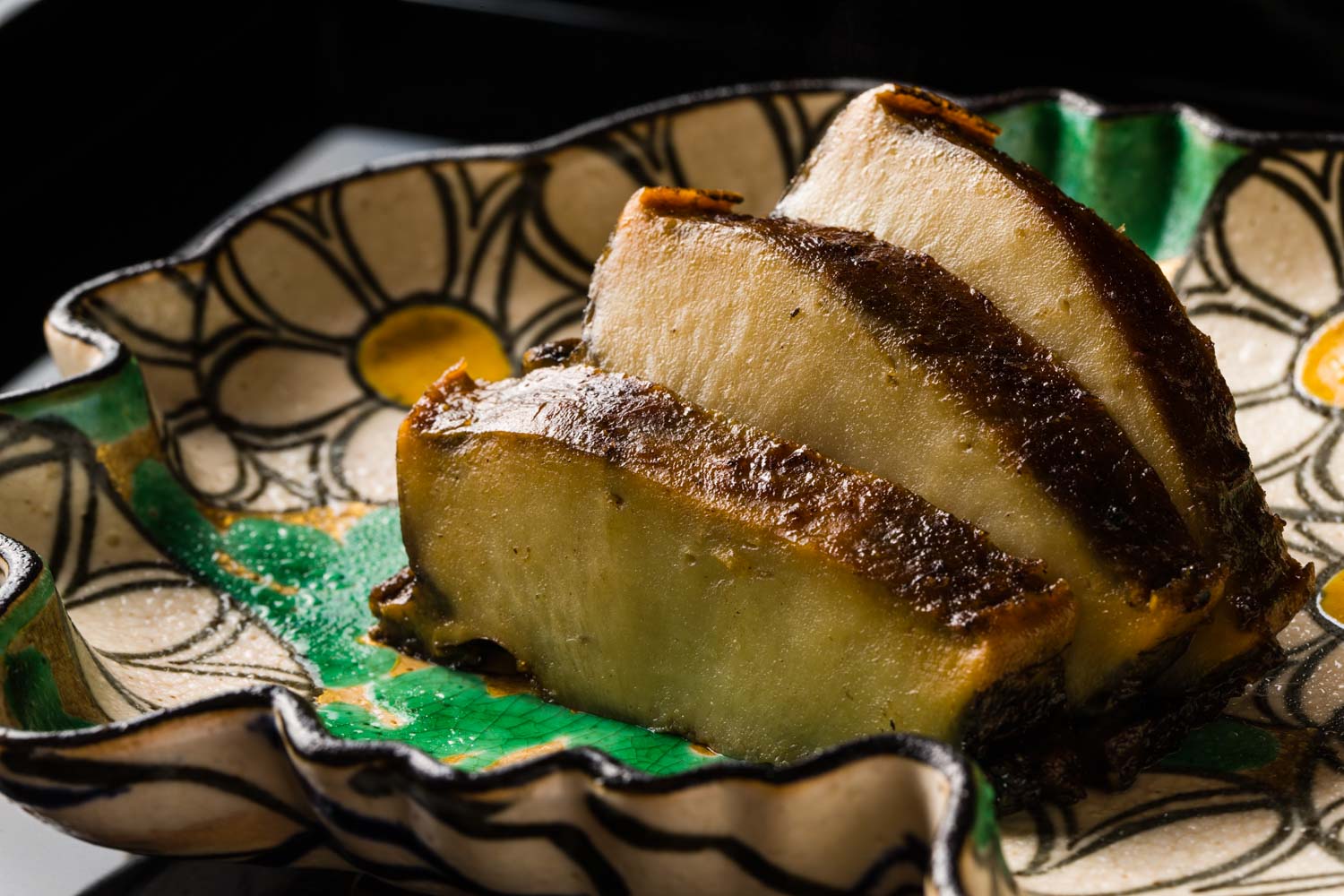 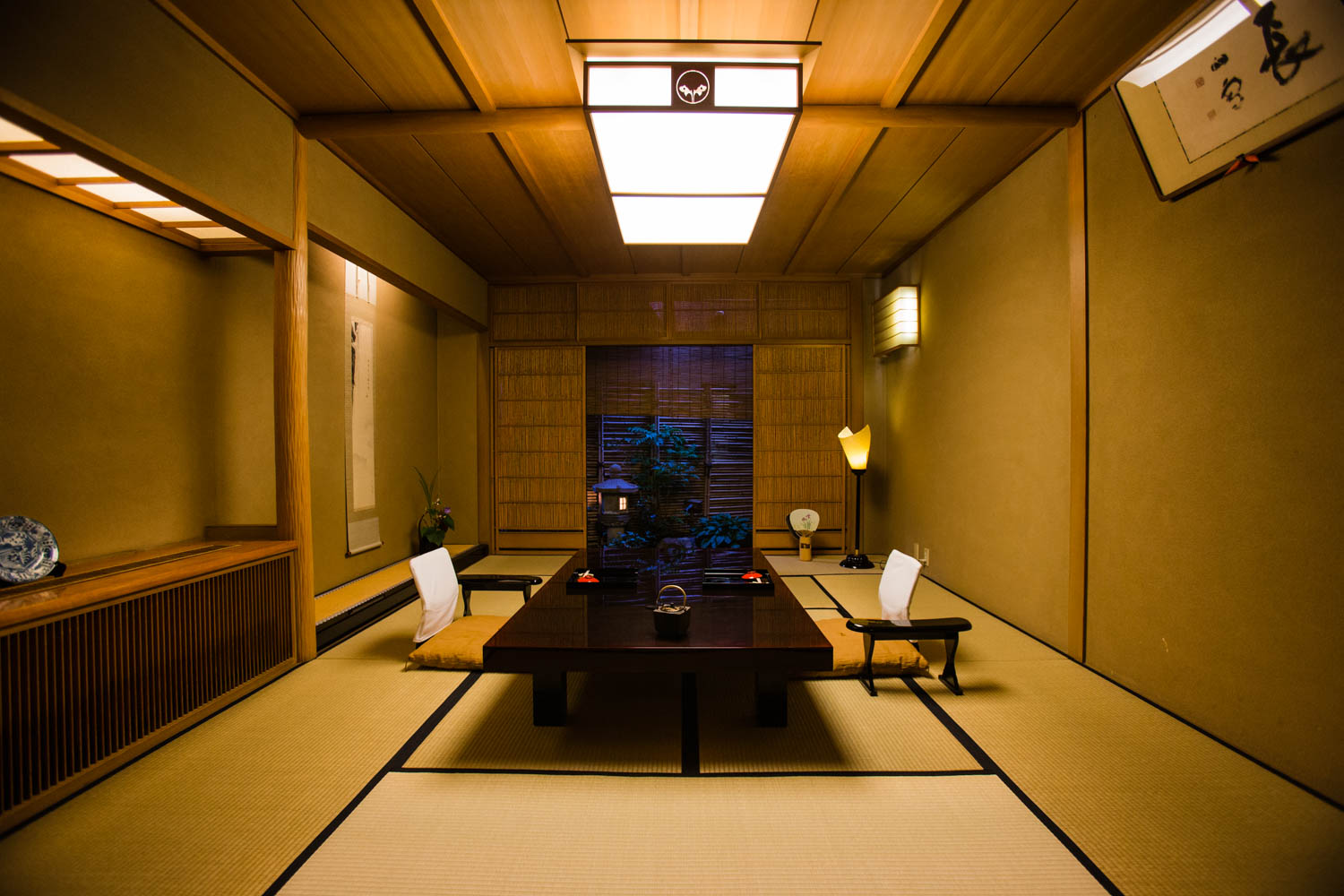 Zeniya’s executive chef is Shinichiro Takagi, a man who studied abroad in the U.S. as a high school student, studied marketing at university, and was contemplating hotel management, when his life took an unexpected turn. There had never been any discussion of him taking over the family business, on the contrary perhaps his father was always trying to shield him from the hardship of the role, but tragedy in the untimely death of his father and Zeniya’s owner, Nobu Takagi, put Shinichiro on the trajectory to becoming Zeniya’s chef.

Shinichiro’s younger brother was headed to culinary school, but the need was more urgent, and after graduation from university a family friend set Shinichiro up with an interview at Kyoto Kitcho, one of Japan’s premier kaiseki restaurants. Lost at first, not only in the culinary sense, but with no clue on the local Kyoto dialect, his perseverance and quiet accumulation of experiences earned him recognition as being able to care for his guests every need. In 1997, Shinichiro returned to Kanazawa and the kitchens of Zeniya, but was confronted with a challenging environment as the least experienced chef. And having never tasted his father’s cuisine, he didn’t know where to start. A few years later during the search for a new head chef, he was once again nudged by a family friend and mentor chef into taking the role himself at just 32 years old. For the first time ever, he went to the market and created his own menu. He threw all his efforts into finding a signature dish and implementing his own style in keeping with modern tastes.

While Shinichiro remains the executive chef, a busy overseas schedule means that the kitchen is now in the capable hands of his younger brother Jiro. When Nobu Takagi founded Zeniya in 1970 in Kanazawa, he named it after Gohei Zeniya, a late Edo Period shipping and trading merchant in charge of sea routes connecting the Sea of Japan with Russia and North America. Nobu would surely feel proud to see how his son has followed in the footsteps of the restaurant’s namesake, an ambassador connecting the cultures and ingredients of the countries of the region. Shinichiro takes his skills and knowledge out into the world to share how people can use their local produce to create Japanese foods that are fulfilling for the body and the soul. With proficient English and a passion for sharing Ishikawa Prefecture’s food culture and his own cuisine, Shinichiro has been invited to serve as chef at countless VIP dinners, including a highly-acclaimed dinner party for the Consulate General of Japan in New York, international film festivals and food summits. Travelling regularly, Shinichiro welcomes time at home in Kanazawa, and relishes the moments standing in the local market or at the counter at Zeniya.

VISION
Takagi believes strongly that one key to understanding mankind is through cuisine and culinary customs. He finds great satisfaction in gaining insight and coming together around food, regardless of ethnic or language differences. And he has a passion for doing things that others are not. Thus, the vision, which he has clearly already started living, entails travelling the world, using local ingredients to create Japanese cuisine.

Zeniya’s tableware collection contains many priceless pieces. With everything from Takagi’s father’s collection, there is almost certainly a sentimental attachment that adds to the value, and yet Takagi insists that every tool and item of tableware is there to be used – not a single piece is for decoration. He loves the stories behind them and how you can intertwine that with the cuisine, and many times customer conversations are sparked by these beautiful items. The black, green, white and yellow of a daisy plate shows the bold character distinctive of works by Ogata Kenzan, one of the most revered ceramicists of the Edo Period. With some more than 250 years old, there are bespoke glassware items, pieces of local Kanazawa Kutani-yaki ceramics, as well as lacquerware known as Wajima-nuri, from a famous enclave of lacquerware artists on the Noto Peninsula of Ishikawa. Lidded vermillion lacquerware bowls with a vivid cherry blossom design have been made with a method called makie, incorporating iridescent metallic powder. Captivated by this stunning design, when you eventually remember to lift the lid, incredible aromas will waft from within.