Tucked away in a back alley in central Tokyo, Sonoji is a small but fabulous find that brings together two of the most classical Japanese cuisines - tempura and soba. Proud to showcase his home prefecture, Chef Toshiyuki Suzuki presents the best of Shizuoka’s seasonal treasures with a few twists.

Foodies from all over the country have visited Sonoji to get a taste of Shizuoka, a region often referred to as Japan's riviera for its picturesque scenery of tea plantations and Mount Fuji. Many may have already visited the original restaurant in Shimada in Shizuoka, and have been eager to repeat their experience again. This time, in the heart of Tokyo. The restaurant has a gracious look with a soft-lit lantern at the foot of its entrance. The calligraphy on the doorway curtain reminds every guest of the simple philosophy they are about to enjoy, “First tempura and finish with soba.”

The beautiful wooden counter, which fits just 8 seats, hugs around the open kitchen where Suzuki performs his mastery. Across the counter hangs a woodblock print of majestic Mount Fuji - a picture of home. Every item on the menu, mostly quality produce from Shizuoka, is written on wooden placards and hung across one of the walls. Just seeing the sheer variety increases your curiosity and appetite for the dishes to come. “We are a soba restaurant that became a tempura restaurant,” Suzuki explains the restaurant’s history. At Sonoji, the final dish of the course is fresh soba, a distinct difference to the typical tendon (tempura on rice) or tenchazuke (tempura on rice in hot tea) at most tempura places. And compared to its peers, Sonoji’s menu is set at such a reasonable price. At Sonoji, it’s quality for everyone.

First tempura and finish with Soba

In Suzuki’s open kitchen sits two big pots of oil. One is filled with pure corn oil while the other is a blend of corn and sesame oil. The former is used for foods like root vegetables and potatoes that need slow frying, while the latter is used for fish that need less time. Sonoji’s batter is thin, creating that perfect light crispness.

Start your meal with some of the classic tempura dishes like the shrimp. Sourced from local Shizuoka seas, the entire shrimp is fried and served from head to tail. Every bite bursts with sweetness and umami. Also try the kakiage fritter, made of a generous scoop of sakura ebi, tiny pink shrimp, also sourced from Shizuoka. One of the unique signature dishes is the tempura of Maisaka seaweed. The thin black layers are rolled up into a ball and fried in hot oil. The combination of crisp and flakey outside and the rare and soft inside is a wonderful and tasty surprise.

Among the seasonal vegetables that are hard to come by in Tokyo include Tamatori mushrooms and Shimada carrots. The carrots are fried delicately for over 20 minutes to bring out the most of its sweetness. A twist to the traditional tempura menu is game meat, and a favorite among Sonoji fans is the round of venison. The meat is first smoked and then fried with light layer of batter. The timing has to be just right to get that perfect tenderness and beautiful pink inside.

Despite years of traditional training, Suzuki takes a playful approach in creating an unforgettable experience for his guests. He often adds a number of tasting plate, such as a dish of three Shizuoka carrots that come from different producers. On another day, he serves two pieces of fried flounder, where you get to enjoy one piece with darker soy sauce and another with yuzu lime zest and salt.

“It’s the comparing and contrast that brings out the most of each flavor,’ Suzuki says. Tempura, like most hot dishes, tastes the best right after it comes out of the pot. Sometimes, Suzuki doesn’t want to waste any seconds so he quickly wraps pieces of tempura in paper and hands them right over to the guest. To make their entire meal offering even more special, he prepares a soba sauce base that have matured in the same pot for over 30 years, instead of using the typical tentsuyu as dipping sauce, The sauce is distilled from four different kinds of bonito fish flakes, giving it a rich and smooth flavor.

To conclude the exciting course, he makes a fresh batch of soba every afternoon. For the best nodogoshi - the sensation of how the noodles feel against the throat - he uses a blend of course buckwheat from Kawane in Shizuoka and Mashiko in Tochigi. Along with the thinly cut noodles, he adds a small plate of sobagaki, or soba dumplings, which literally means stirred soba flour. Enjoy the texture while it’s fresh.

Ingredients
Made-in-Shizuoka is at the heart of Sonoji’s cuisine. From fresh local catches like sakura shrimp and hairtail, and rare varieties of root vegetables, Suzuki finds joy in bringing these produce to Tokyo foodies to taste and appreciate.

Now based in Tokyo, he continuously visits local producers in Shizuoka to keep a close relationship. For Suzuki, this is one of the most important part of running his restaurant as it determines the quality and cost of his ingredients. These relationships are his lifeline. 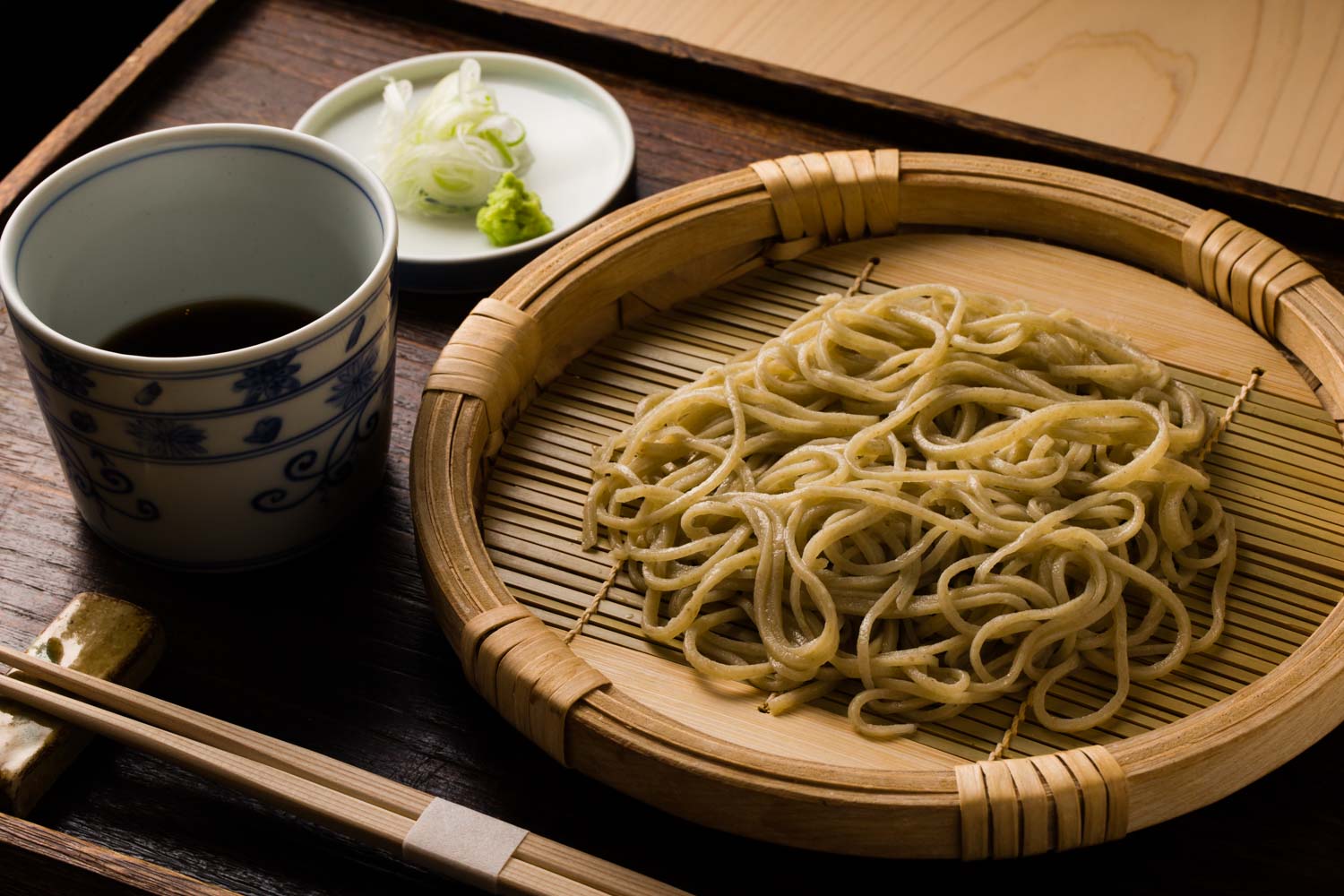 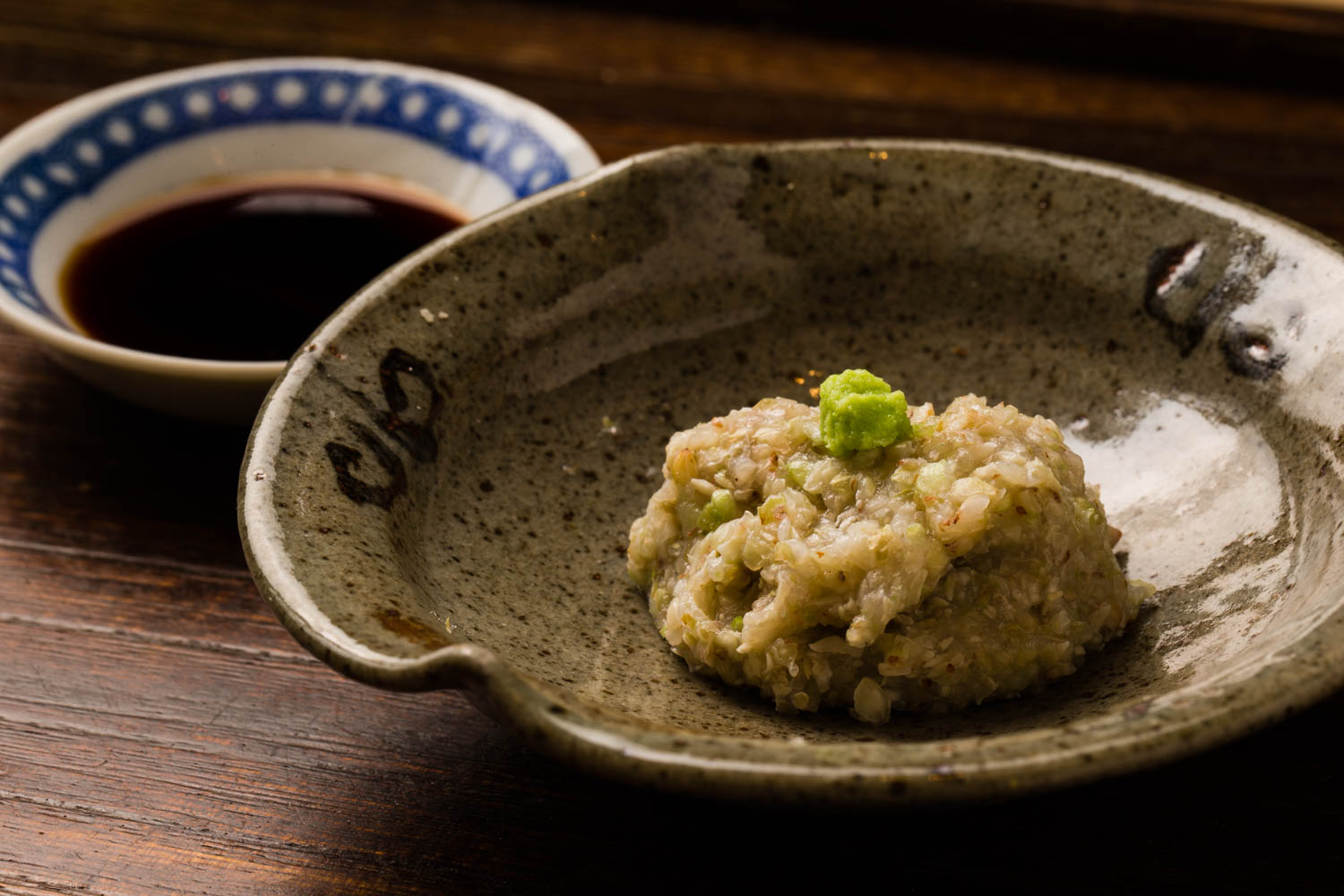 Born as the oldest son of a soba restaurant owner, he had dreamed of becoming a chef from an early age. He discovered his passion for tempura when he first watched his grandfather cook tempura, with great care and precision. After attending culinary school, he continued training under his family and also at other restaurants, while trying out many famous restaurants around Tokyo. In particular, Suzuki was astonished by the taste of the tempura made by the master chef of Mikawa, an established tempura restaurant, and continued to revisit him again and again for inspiration. After almost a decade of apprenticeship, he decided to open his own restaurant.

In 2000, he opened the original Sonoji in Shimada, Quickly, tons of gourmands flocked to get a taste of his soba and tempura. By 2016, the business had grown successful enough for Suzuki to open the second restaurant in Nihonbashi in central Tokyo. “Nihonbashi-Muromachi is said to be where tempura soba was first invented,” he explains. “As someone who is obsessed with tempura, I couldn’t think of a better place to open a restaurant.”

Vision
“There are not many restaurants in Tokyo that promote Made-in-Shizuoka,” Suzuki says. “I’m so grateful that that has become the attraction of Sonoji.” The combination of quality, creativity and pricing, it’s no surprise that it’s hard to get a reservation at Sonoji these days.

“I’ve set a number of goals for our Nihonbashi restaurant,” he says. “I will work hard to achieving them. But eventually, I would like to go back home to Shizuoka.”

Just like the food, Sonoji offers the best of Made-in-Shizuoka sakes. The collection offers only the labels made by Oomuraya Brewery in Shimada. In addition to seasonal selections, they offer classics like Wakatake and Oomuraya Jubee. If you’re lucky, you may be able to get a taste of some rare finds like Wakatakeya Premium Junmai Daiginjo. Its pure tone that comes from premium quality rice matches perfectly with the strong flavors of the tempura. “Naturally, the vegetables and sake that come from the same soil are a great match,” Suzuki says.