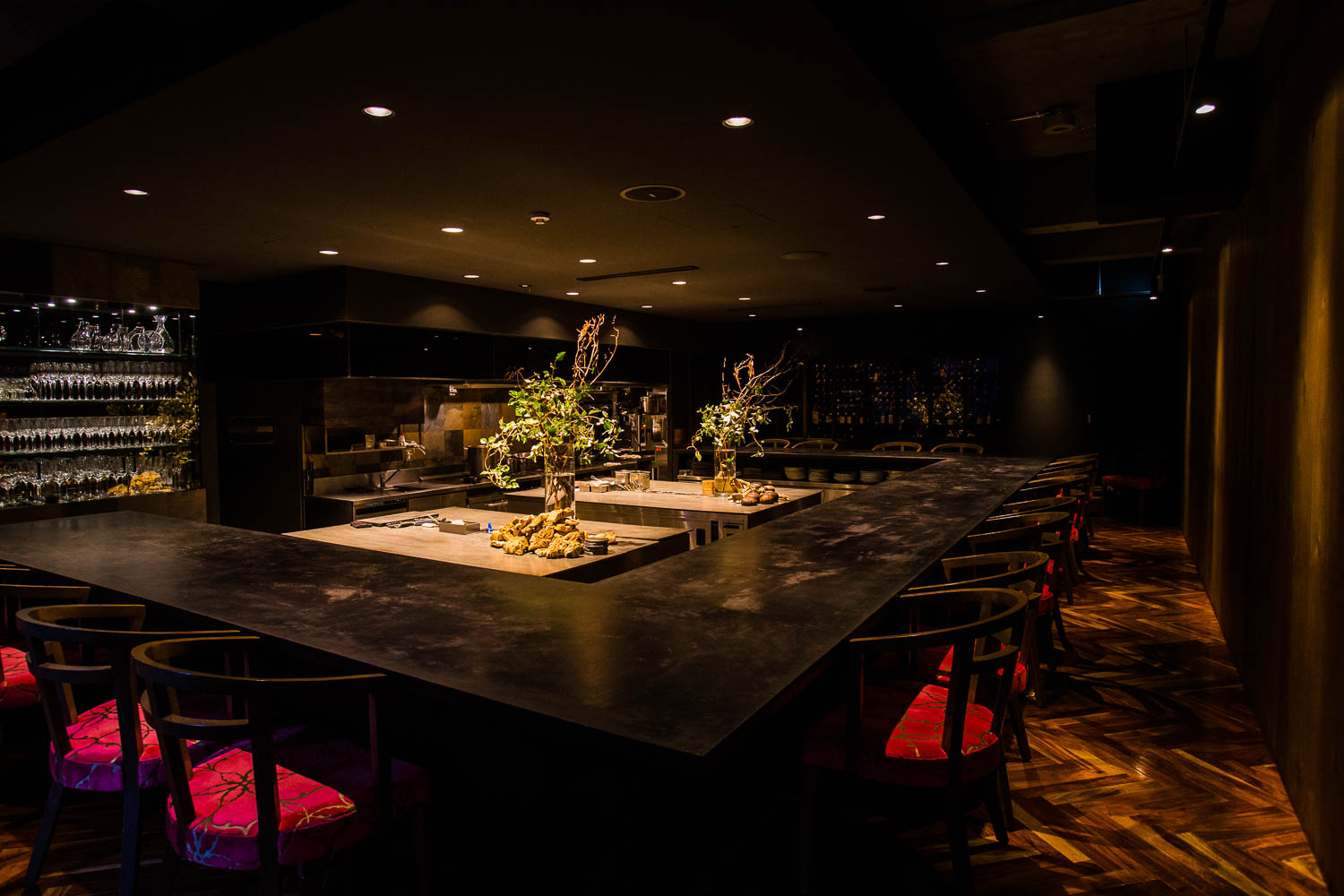 If you are wondering if the hype around Florilege of Michelin and Asia’s 50 Best is deserved, it is – totally and undeniably. Allow yourself to be woven into Florilege’s beautiful anthology of stories presented by a Japanese culinary ambassador and leader of French cuisine in Tokyo. Every plate is a stunning display of culinary artistry wowing guests in both presentation and flavor. Overflowing with originality, the art of Florilege cuisine is beguiling — it draws you in and stays with you forever.

Florilege is the French word for an anthology, or a collection of poems, writing or songs, and the flower-like logo is a woven design of the letter F in calligraphy characters. Just one street back from the busy Gaien-Nishi Dori in the Gaienmae area of central Tokyo, strolling down a diagonal street, it instantly feels quieter and more peaceful. Groups of friends and couples walk arm-in-arm, making their way to the various bars and eateries in the area with excited anticipation. Proceed down the steps to the below-street level location and the lighting is low. Earthy brown floor-to-ceiling curtains hanging all around give you the impression that you’re backstage at a show. That is until you are led to your table and realize you have front row seats!

With all the seats in a U-shaped configuration around the open kitchen, and a semi-private room beyond the glassware cabinets, the move to this new location in 2015 deepened possibilities for guests to be woven into Kawate’s culinary story. It’s an extreme close-up on how kitchens work and a priceless opportunity to see your meal coming together through the hands of many, leaving you with total admiration for the chef and his talented team. It’s a bold design but one that allows for wonderful communication between the chef and his guests: the chef talks directly with guests about the inspiration behind each dish and the producers who made it all possible, leaving the service staff to take care of all your needs.

Mastering all the techniques of both traditional and innovative French gastronomy, the finishing touches that set Florilege apart are the result of Chef Kawate’s fine-tuned sensibilities. While the ingredients play an essential role, each dish carries an important message and is driven by a concept. Guests are intended not simply to taste the cuisine but to experience it.

Take for example Florilege’s beef dish featuring meat from wagyu cows, not heifers. In contrast to most popular restaurants which tend to use the highest-grade ingredients they can find, Chef Kawate goes completely the other direction. He talks of how Japan wastes approximately 17 million tons of food every year, of which one-third to one-half is perfectly edible. Saddened by that reality, Kawate searches for ways to break the cycle, hence the inspiration behind his beef dish. It is commonly thought that the quality of beef from a cow that has had calves is not up to par, but Florilege wants to overturn that misconception. Dried overnight, sliced extremely finely, and served carpaccio-style topped with a thoroughly French-style broth, the shabu shabu dish arrives with a message card for guests sharing the chef’s philosophy.

Dishes express Japan’s bountiful seasons as with many popular Tokyo restaurants, but each demonstrates wonderful originality and presentation that cannot be found elsewhere. Ayu sweetfish is typically roasted over charcoals and served with tadezu water pepper vinegar. In contrast, Kawate’s reconstructed dish of ayu seemingly swimming amidst the water grasses of shallow water makes you stop and contemplate. With Kyoto sweet white miso as the hidden ingredient, this dish’s deliciously deep flavors convince you of the merits of revisiting traditional cuisine.

A wicker basket filled with what appears to be freshly harvested corn is placed before you and a single ear still in its husk makes its way to your plate. Closer examination reveals that in place of fresh corn is creamy polenta filled with the deliciously sweet kernels in a re-creation of a delicacy from southern France, but for which Chef Kawate also took inspiration from dago-jiru – a regional dish from Miyazaki Prefecture in southern Japan and the home of some of Japan’s largest corn crops.

In a dish called Scallop fromage blanc, the spotlight shines brightly on an unlikely star – scallops. Pressed with kombu kelp in mille-feuille layers, the scallop flavors strike the perfect balance with the creamy, slightly sweet fromage blanc accompaniment. The juxtaposition of textures in the Amazon cacao mousse dessert make this dish a joy to devour, but what takes this desert to the next level is the refreshing herbal flavors of home-made shiso Japanese perilla soup. And a sakuranbo cherry dessert is like an objet d’art, almost too beautiful to eat. But the fresh fruit flavor finished with glossy pâte de fruit fruit jelly is irresistible.

The creativity extends well beyond cuisine into drinks, and Florilege offers not only wine pairings to accentuate the food, but cocktail pairings as well. It’s a twist rarely seen in Japan and one Kawate was experimenting with from well before the move to the new location.

INGREDIENTS
With not a single imported ingredient, Florilege serves exquisite French cuisine using only carefully selected home-grown produce. Each dish is created with utmost love and respect for the ingredients diligently produced by farmers around Japan, including the organic vegetables shipped directly from Fujii Farm in Nagano. Chef Kawate keeps in regular contact with producers, visiting them and regularly consulting them through the LINE messaging app on his smartphone. A recent visit to Arita Kawamachi in Wakayama has yielded of a new relationship and delivery of sansho Japanese pepper to Florilege. It’s further proof of Kawate’s conviction that the procurement of ingredients is all about nurturing personal relationships. 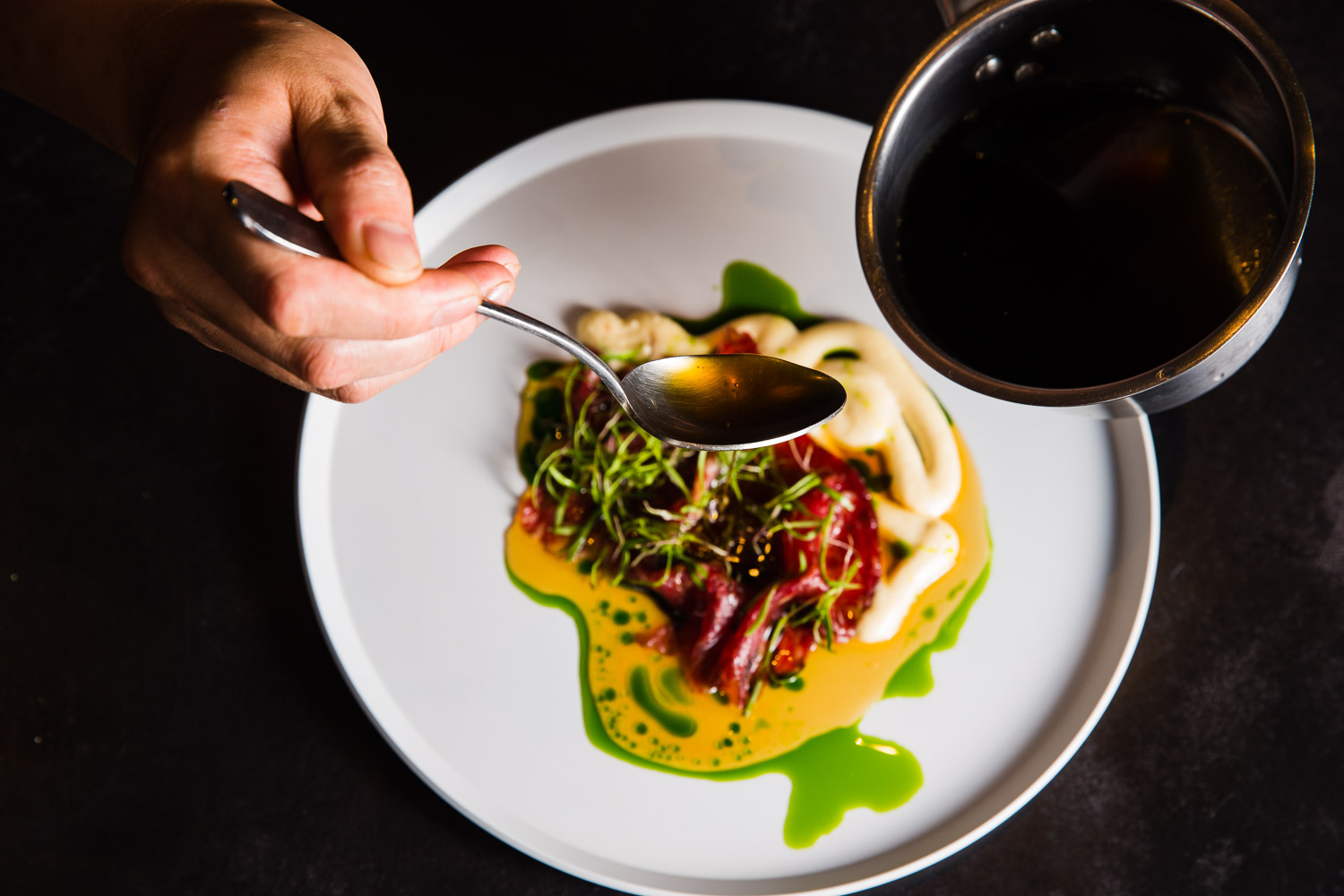 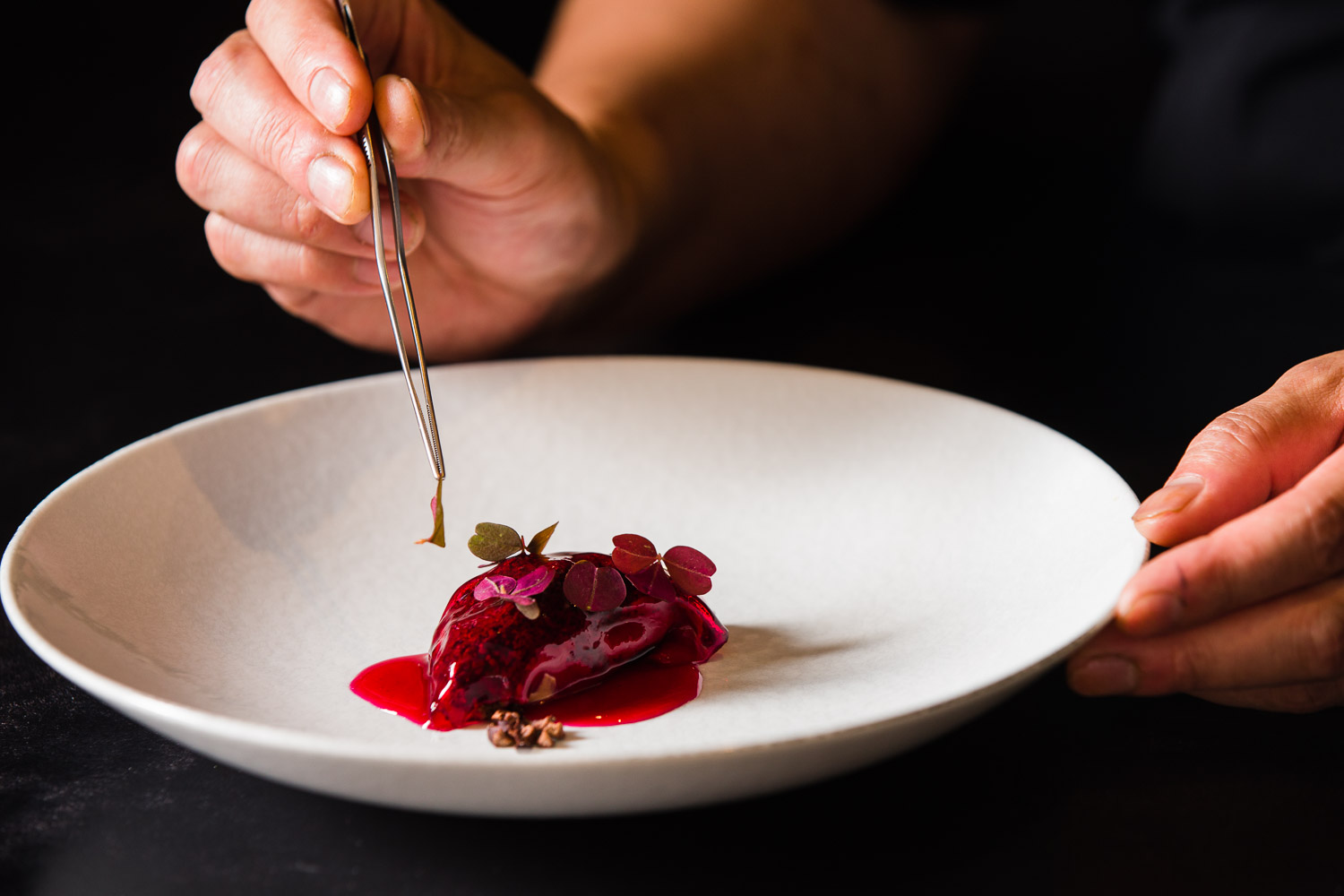 Born in Tokyo in 1978, Yasuhiro Kawate is an extremely personable chef who sees his role as owner extending far beyond his restaurant space into sharing the appeal of Japanese style and ingredients with the world. With a chef father, his sights were set on that career path from an extremely early age.

After graduating from the food science department of a Tokyo high school, Kawate commenced his chef training at the QED Club in Ebisu and Ohara et Cie in Nishi-Azabu. After taking on the sous chef role at the popular Le Bourguignon, he took off for France in 2006, polishing his skills for a full year at the three-star Michelin Jardin des Sens in Montpellier. His return to Japan saw him standing in the kitchen of the highly-acclaimed, three-star Michelin Quintessence as sous chef, but before long he went independent with Florilege in 2009. His knowledge for aromas, flavors and beverage pairings has been cultivated over many years and accentuated through his sommelier certification and experience from his early twenties working at a shochu Japanese distilled spirit specialty bar.

VISION
Kawate says he makes a point of not having a dream. His focus must be on giving his best to the task before him each day. But when you consider that the move to a new location was partly motivated by a desire to be selected in Asia’s 50 Best, you get the impression that deep-down Chef Kawate is in possession of big dream. A sister location is set to open in Taiwan in Autumn 2018, manned by Kawate’s sous chef. Beyond that, his sights are set on Singapore with a view to building a stage on which the next generation of chefs can perform.

Jumping from a 14th place ranking in the 2017 Asia’s 50 Best to a highly coveted 3rd in 2018, his hard work and sheer talent are clearly paying off. And it is surely thanks to his bright, friendly and sincere demeanor that he is surrounded by many friends from the culinary world. He speaks extremely eloquently on all subjects related to career, restaurants and food in general, which is part of the reason he is so sought after as a guest at international events. “As a chef, if you have talent you can get the job done”, says Kawate before heading off for a spot of fishing to refresh his mind and soul before returning to write the next pages of his Florilege anthology.

From ingredients to tableware and glassware, Chef Kawate has a penchant for “Made in Tokyo”. The vast collection of glassware includes six different types of wine glasses plus carafes, all from Sugahara, a succession of glassware artisans who began their work in Tokyo in 1932. The chef himself engages in the design and production; he loves the feel of the glasses in his hands and is in awe of the exquisite craftsmanship behind each piece. Best of all, every piece carries and draws you in to its story. Perfectly pairing with the ingredients they carry, every item of Florilege tableware has an incredibly natural feel. The pieces exude originality, like a paulownia wooden platter which was dried for 30 years before being treated with urushi lacquer, and an iron-treated coconut used as a bread bowl. Nonconventional items also serve as the beautiful backdrop for cuisine, including stones and tree stumps, and Chef Kawate is currently working on ways to incorporate Arita-yaki porcelain dishes that would otherwise be disposed of, with sustainability always at the forefront of his mind.