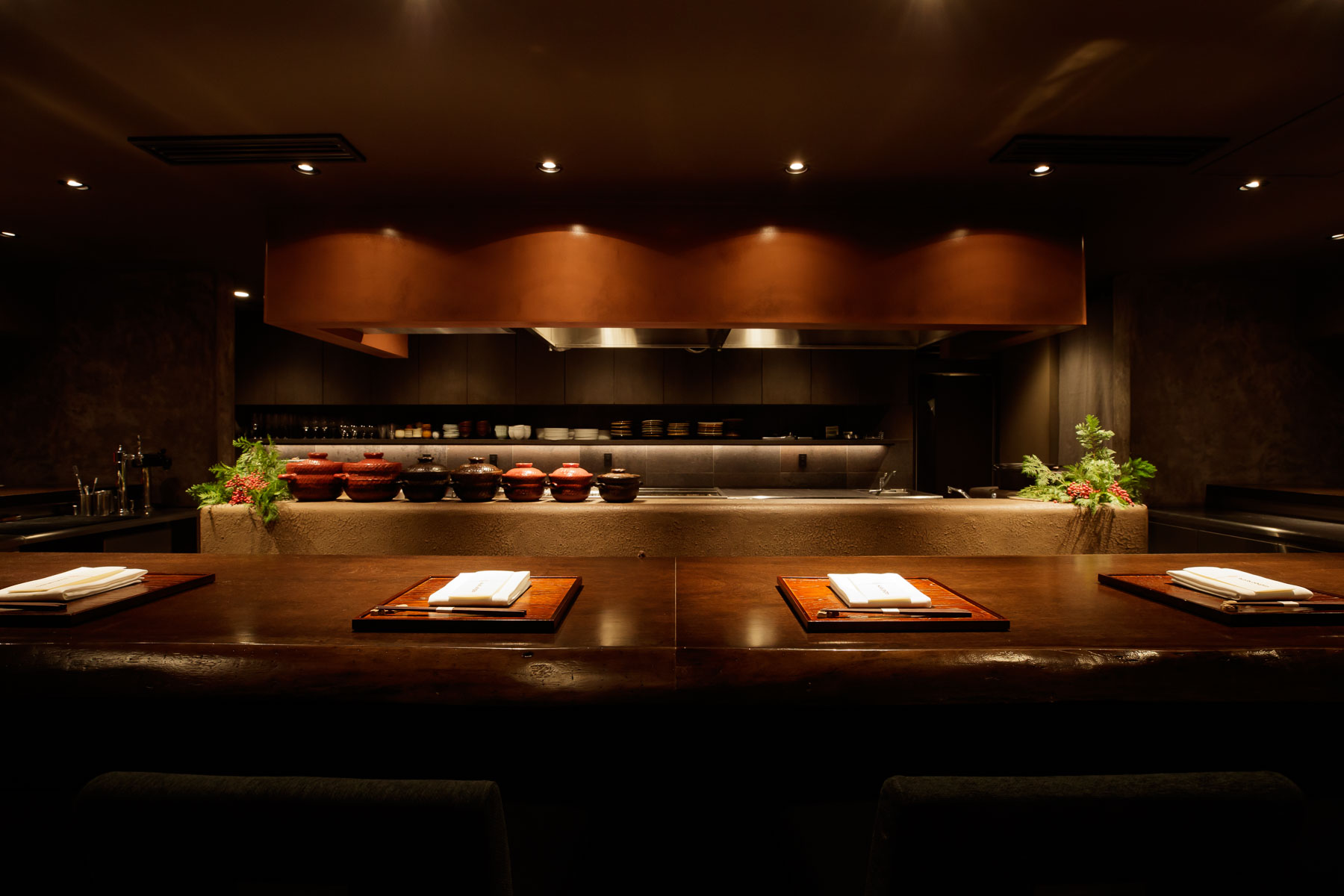 A collaboration between chef Zaiyu Hasegawa of Den and chef Hiroyasu Kawate of Florilège, the restaurant focuses on its theme of "connect, tie, stick”, where the skewers express their original world. Both chefs have been awarded two Michelin stars and selected as one of the 50 best restaurants in Asia, making them some of the most well-known chefs in Japan. The atmospheric counter feels like a stage where the performance of the chefs can be enjoyed while savoring a variety of dishes that represent the best of the two worlds,

Its name consists of the three segments, "Den-Kushi-Flori", which suggest that it is a collaboration by Zaiyu Hasegawa of Den and Mr. Hiroyasu Kawate of Florilège that uses skewers (kushi). They have been friends and working together at events for a long time, thus coming up with the idea for the collaboration restaurant. Chef Susumu Shimizu, who has known the two chefs for the past ten years, devised the menu and is serving the guests at the counter, and after just a year and a few months from its opening in October of 2020, it has obtained a Michelin star.

The restaurant is in the basement of a building that stands next to fashionable stores typically found in Aoyama, and as you pass through the noren into the restaurant, the subdued lighting creates a relaxed atmosphere. Inside the U-shaped counter sits a rugged kamado, a traditional Japanese cooking stove made of mortar and clay, where the final rice dish cooks in an earthen pot. Its design sets a stage, allowing to watch the agile movements of the chefs from every one of the 18 seats. The proximity to the chefs reveals their fascinating performance of serving the dishes in front of the eyes.

The center of the U-shaped counter naturally provides an ideal view, while the ceiling is a little lower at the ends, giving it a more secluded feel. Moreover, three to four people can sit together at the corners. Those who have been to Florilège may notice the similarity, as they were designed by the same creator. Either end of the kamado is decorated with seasonal flowers, adding a sense of the time of the year.

The hostess is Kyoko Hashimoto, who moved here from Florilège. Together with the chef, she unites the team and welcomes the guests with high-quality hospitality. It is delightful to taste a menu that represents the best of both restaurants, which cannot be expressed by either Den, the Japanese restaurant, or Florilège, the French restaurant alone, at rather reasonable prices.

There are just tasting menus, which change every two months after meetings and trials by the three chefs. The focus is on the seasonal ingredients, and the menu given to the guests lists only the names of the ingredients to stimulate their imagination. For example, in December:


The first dish is a French boudin noir inspired by the pairing of mustard with offal to pair with the Japanese vinegared miso paste. The second dish combines softshell turtle with Chinese cabbage étuver, fusing the Japanese elements of Den and the French of Florilège in one dish.

The dishes change from time to time, but the earthen pot rice is always served at the end, cooked in exquisite Arita ware. For example, Japanese parsley gives a touch to the rice with root vegetables, which is then topped with beef carpaccio and thickened dashi sauce. Others include rice with maitake mushrooms and beef tongue confit, sakura shrimp rice with bisque as a finishing touch, and corn rice with pork confit. As with the other dishes, there are surprising elements hidden everywhere.

The menu consists of six dishes for lunch and eight dishes for dinner. It is also possible to taste the evening course during the day.

INGREDIENTS
The rice used is "Nikomaru" from Shizuoka Prefecture, characterized by its round, puffy grains with moderate stickiness. The same rice is also served at Den. The eggs are "Mahouran" produced by Ranmeisha in Utsunomiya City, Tochigi Prefecture, with a sweet and rich flavor that tastes great whether raw or cooked. Vegetables are mainly from Tochigi Prefecture. Sometimes they source the ingredients together with Den and Florilège, taking advantage of the affiliation, and other times they purchase only for Denkushiflori. They don't work with specific farmers, as they prefer not to be tied down to ingredients when creating their menu. They choose the best suppliers for each seasonal menu, such as rabbits from Spain. 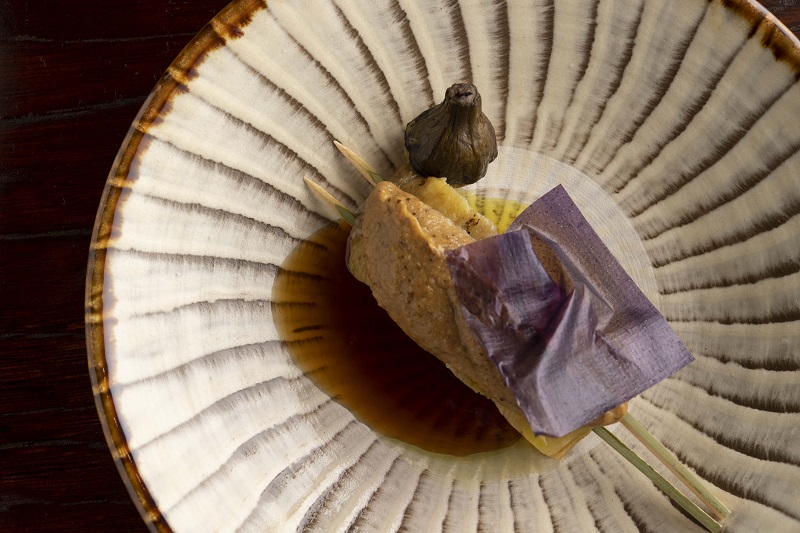 Susumu Shimizu was born in Oita Prefecture in 1975. After graduating from an engineering college and working for a semiconductor manufacturer for a year, he entered the culinary world. Working part-time at restaurants since 16 years old, he was intrigued to become a chef. After three years of training at a Japanese restaurant in Tokyo, he decided to pursue his career as a French chef and joined “Le Jardin des Saveurs" in Ginza. He then moved to France in 2002.

Having worked at a bistro in Lyon, he spent two years at the three-star Marc Veyrat. He also gained experience at Au Bon Accueil and Chamarre in Paris, and then at Arpège for about two years. Impressed by the excellence of meat dishes prepared by Alain Passard, nicknamed the “meat magician”, he decided to specialize and became the chef of the meat section in the latter half of his career. He also worked for six months at Hugo Desnoyer, the best butcher store in Paris, to further pursue his passion for meat. In 2009, he returned to Japan and became the chef at L'Art et la Manière in Ginza. In August 2013, he opened his restaurant, Anis, in Hatsudai, which lamentably closed in March 2021. After that, he started helping at Den, and in October, he became the chef at Denkushiflori.

Hasegawa and Kawate have been friends for ten years. They each opened L'Art et la Manière and Florilège in 2009, and they were often featured together in the media, so they began interacting with each other. Soon after, Kawate connected Shimizu with Hasegawa, and they started to meet frequently in private. Three of them are able to talk on equal terms, which allows Shimizu to serve as the chef of Denkushiflori while living up to the names of the two famous chefs.

At Denkushiflori, they strive to make the most of the counter seats facing the open kitchen, which creates a lively atmosphere so the guests can enjoy the beauty of the cooking process. Shimizu believes in providing dishes that convey the essence of his ideas, rather than simply copying Hasegawa and Kawate.

VISION
While further enhancing the appeal of Denkushiflori that combines the best of Den and Florilège, it aims to evolve together to be on par with the two, rather than being just an affiliate. Shimizu would like to play out the scenario created by Hasegawa and Kawate as his own and make sure that the guests are surprised and delighted beyond their expectations.

They consider drink pairing to be part of the cuisine. The pairing course offers seven drinks, four of which consist of wines, one or two of sake, and mixed drinks. The wines include French Alsace, Loire, New World, and California.

When it comes to the alcohol selection, there is also a fusion of Den and Florilège styles, and it additionally includes a range of sours. The images shown from the right are "kabuchii", made with a fragrant Okinawan citrus kabuchii and vodka, "Sudachi wasabi" made with sudachi, Japanese citrus, and wasabi-infused vodka, and “Tomato Lemon" that combines condensed, clear tomato juice, lemon syrup, and pickled tomatoes.